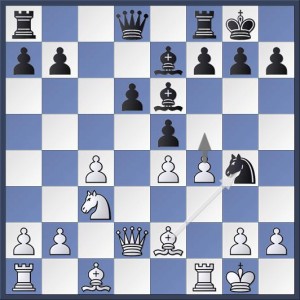 An interesting position from last night’s match. In Joyce vs. Hutchinson, Black has just played 11…Ng4 and this led to an interesting passage of play. The question is, who has the advantage here? Answer in the game viewer at the end of this post.

Last night the Trades Club was unusually busy for a Monday night during the summer break as Hebden Bridge chess club hosted their nearest neighbours Todmorden for a friendly five-a-side chess match to trial a new team handicap format that will be introduced when the new Calderdale Evening Chess League season begins in September. Adopting the rules from the Huddersfield Chess League’s handicap competition, team captains first compare the grades of the players in each pairing of the match and, depending on the average rating difference between the two sides, award the weaker team with a points advantage to increase their chances of victory.

Hebden Bridge team captain for the night was John Kerrane and, heading up the Todmorden side was Dave Milton. As it happened these two were also paired to play one another on board two. The Hebden line up was a blend of new blood and experience. On board one, new member Roger Baxter played his first game for Hebden Bridge. He’s played plenty of chess before but that didn’t make it any easier to assess what rating to give him for the purposes of this match. In the end the estimate of 133 still put him on the top board where he faced Richard Bedford who is himself making a fresh and very welcome return to Calderdale chess. On board 3 Hebden veteran Terry Sullivan faced a dangerous adversary in the form of Tom Webster. But then on boards 4 and 5 the home side fielded their least experienced players. 10 year old Luca Curry has already shown very promising signs in his outings for Hebden Bridge ‘C’ last season. He played John Paul Ellis on board 4. On board 5, another relative new-comer, Hutch Hutchinson took on Bill Joyce. These line-ups were, on paper, marginally in favour of Todmorden and so Hebden Bridge were given a  ½ point head start in the match.

As the match went Hebden didn’t need the head start. On boards 4 and 5 where Hebden should have been weakest, they actually scored two full points in double quick time. Luca dismantled John Paul most efficiently and Hutch out-gunned Bill in similar vein navigating some complexities on the way (see the position on the right). These results left Hebden up 2½ – 0 and meant Todmorden had to win the last three boards in play to take the tie.

They almost did it. First Dave Milton broke with tradition as he managed to overcome John Kerrane and break a long streak of draws between these two players who must have faced each other more times than Kasparov and Karpov did in the 80’s. Then, after a lengthy end-to-end struggle, Terry finally blundered in what appeared to be a losing position against Tom. Todmorden were right back in it and the top board would decide the match.

This last encounter was a tense affair but Richard always seemed to be in control. At one point the kibitzers got excited when it appeared Roger had a neat knight fork with a check and discovery to win White’s queen. He over looked it but as Richard calmly pointed out after the game, the knight could have been recaptured with a rook revealing a defence of his queen that would have given him an extra piece. In the game Roger hung on tenaciously and Richard couldn’t find a way to break through. In the end, cruelly, the clock decided the outcome as Richard ran out of time and Roger took the full point where he perhaps have been only deserving of a draw which would nevertheless been enough for Hebden to take the tie.

So, a few learning experiences for the league and the fixtures secretary to consider, but otherwise a successful experiment. I’m sure that the new competition will be a valuable addition to the league schedule and fulfill it’s objective of providing league 2 players with useful additional game time.

Next door to the match Nick Sykes and Dave Shapland played the first of a pair of thematic games that they had agreed to play during the summer break. The theme they’d selected being the super-sharp and highly complicated Yugoslav Attack of the Sicilian Dragon. Nick played White in the first game and a very interesting encounter ensued. I’ll not spoil a future article by revealing the result just yet. That analysis will come in a future post.

Last but not least. Next Monday the 27th of July will see the club hold a friendly rapidplay competition over 5 rounds where each player has 15 minutes to complete all their moves. Players from any club are welcome to join us. Play will start at 7.45pm so please arrive by 7.30pm to get yourself included in the draw.

2 Responses to “Successful experiment for Hebden”