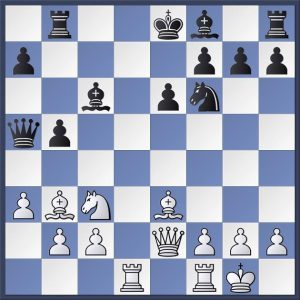 This position from Shapland vs. Wells, Blackpool Congress was considered in our Analysis Evening earlier this summer. It’s White to play. What would you do here? Find out the best move in the game viewer at the end of this post.

It’s been a little over three months since we last posted on this website and your editor has enjoyed something of a summer break. However, with a new season looming, it’s time to brush the cobwebs away from my keyboard start posting again. I thought it might be a good idea to briefly recap and reflect on some of things that have happened since our last post in May.

The final chapter of this year’s summer programme will take place on Monday 3rd of September when our annual Lightning Championship will be staged. PLEASE NOTE, this is going to take place at The Golden Lion, Fielden Square, Todmorden as the Trades Club is unavailable.

Please do try and join us for what is always an enjoyable evening. Remember, Lightning Chess is played with a buzzer sounding every 10 seconds to regulate when each move must be played.

Round 1 will start as soon after 19.30 as possible so do try and arrive at The Golden Lion before then if you can.

Now that we have that out of the way lets quickly list the winners and losers from last season’s action.

Eagle-eyed observers have noticed that the Yorkshire Chess website has disappeared. Is it ever to return they ask? It’s unlikely at this time we think. Essentially it had been operating on the good will of the webmaster (who was funding hosting costs out of his own pocket) and a small editorial team of volunteers. When the Yorkshire Chess Association either dithered, or declined, to cover ongoing costs it expired.

There is something of a replacement in the form of Steven Mann’s website about Yorkshire Chess which now includes a page for the Yorkshire Chess Association. (There is also a link to this site in the ‘Useful and interesting websites’ list on the right of this page.

Additionally, the YCA Grading website though still live now, is essentially being archived this year. Jon Griffiths, who has done sterling service, has retired as the Grading Officer for the Yorkshire Chess Association and with him goes the website. You can still go to the site to check you current rating which will be used as the starting rating for Calderdale fixtures this season. However, the ratings here will not be updated and no more league results will be added. The site will disappear completely in 12 month’s time once the English Chess Federation (ECF) ratings supplant the local ratings.

All this leads us nicely onto…

4.) Calderdale League 1 to be ECF graded next season

The situation with the Yorkshire grading website left all the leagues in Yorkshire with critical decisions to make at their AGMs over the summer. The only way to get games graded centrally now is via the ECF’s Grading Officer for Yorkshire and that means that all players in the league must become members of the ECF. The only alternative is to grade league games locally in order to avoid ECF membership fees.

At the Calderdale AGM this was considered and discussed at length with some of those present feeling that lower rated, occasional players only playing in the Calderdale League would be unwilling to spend £16 to join the ECF as Bronze Members. Others pointed out that regular participants in the Calderdale, Bradford, Huddersfield, Leeds and Yorkshire Leagues would want all their games to go towards one single rating and may decide to play elsewhere if Calderdale didn’t follow the suit of the other Leagues, many of whom are already affiliated to the ECF.

Finally, it was agreed that Calderdale League 1 games would be rated by the ECF and that, for this season at least, League 2 and the Handicap League would not be ECF rated. This decision will be reviewed again at an EGM meeting next year.

The upshot off all of this discussion is that any player taking part in Calderdale League 1 matches this season must become an ECF Member. Bronze Membership costs £16 (£5 for Juniors) and you can join online via the new membership portal. The link has been added to the list of ‘Useful and interesting websites’ on the right.

If you plan on playing in Congresses as well this season then you should become a Silver member (£23.50 or £5 for Juniors) to have those games graded otherwise you will be charged an additional entry fee by the Congress organisers in order to get your games graded.

So, if you are playing in League 1 this season please join (or renew your membership with) the ECF at your earliest convenience. The membership year starts on September the 1st.

At our own club AGM this summer it was agreed that we would absorb the players of the Golden Lion team into our club. This was done primarily to allow the team to continue playing home matches in Todmorden whilst benefitting from the necessary organisational structure of Hebden Bridge Chess Club. It will also allow some of our other members who live in Todmorden to join this team if they wish to do so.

The Golden Lion will continue to be the base for the team but please note that it is now known as ‘Hebden Bridge ‘A’ on the new Calderdale League website were you can find all of the scheduled fixtures for this season.

7.) ‘Teamer’ now being used to help manage our League 1 teams

At the club AGM it was also agreed that the League 1 teams (Hebden Bridge ‘A’, ‘B’ and ‘C’) will now be administrated in part by an online service called Teamer. If you are invited to play for any of these teams you will receive an invitation (by text or email) to join the club’s Teamer web pages. You will also be notified and invited to play in matches via the Teamer service and you will be able to accept or decline these invitations by text or email or by logging onto the website. There is also a smart phone app available that you can use and receive notifications this way.

We plan to trial this for a year and then gather feedback from members to see how they liked using it at the end of the season. It will hopefully reduce the time and effort needed for the Captains to organise their teams but it won’t entirely replace the need for phone calls. Basically, if you don’t respond to the invitations we’ll pester you by calling instead!

If you have any questions or concerns about how Teamer works please email us hebdenbridgechessclub@gmail.com or speak to Dave Shapland at the club sometime.

Our summer programme of events and competitions has been continuing as usual over the last few months. In July, Dave Shapland presented a game from the Blackpool Chess Congress which he took part in back in March and came joint first in his section. The game was from the critical fourth round and several members have asked for it to be published here for further study and entertainment. You’ll find it in the game viewer at the end of this post.

Last Monday we held a simultaneous match against our strongest player, Matthew Parsons. The turn out this year was excellent with 11 members coming along to try their luck against Matthew. Here’s a brief report from John Kerrane.

Playing all eleven players at once, and making moves on each board in turn, Parsons seemed to have no trouble in establishing superior positions on most boards, but two stalwarts of the club’s C team, Andy Leatherbarrow and Martin Syrett, both fought back and eventually won their games. The rest of the company weren’t so successful, and Parsons finished the evening on 9 wins out of 11, a pretty impressive score line.

Parsons is a popular colleague, and members were relieved to hear that he has decided to continue playing for Hebden Bridge next season!

Considering how difficult it is to take on so many opponents at once, and having performed so well, it seems terribly unfair to only publish one of Matthew’s defeats from Monday night and yet, we have done so! Andy Leatherbarrow’s win can also be found in the game viewer at the end of the post.

Magnus Carlsen will take on his latest challenger, Fabiano Caruana in a 12-game match in London this November. The venue and schedule was announced last month. This event offers a unique opportunity to sample the atmosphere and tension of a World Championship match. Your editor attended a game from the Kasparov vs. Kramnik match in London in 2000 and can heartily recommend it to anyone who’s got the inclination to take a day trip to London for it. Tickets and further information can be found on the World Chess website.

2 Responses to “Summer summary: 10 things you need to know about”