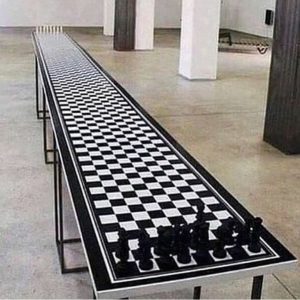 In these times of ‘social distancing’ chess players are having to become creative in order to pursue their favorite pass time! Thanks to Andrew Clarkson for sending me this amusing image!

With the Corona virus causing chaos and unprecedented disruption around the world, Hebden Bridge Chess Club and the local chess leagues have all been forced to adapt in order to continue their activities. All ‘over-the-board’ chess has been suspended until we are once again allowed to sit down across from each other to play the game we love. In the meantime, Hebden Bridge Chess Club has moved online. We’re still getting together on Monday evenings but now we’re doing it via Chess.com and Microsoft Teams.

Last Monday we hosted our first try at holding a Microsoft Teams video call so that we could look at some puzzles and a game together. More than 10 us managed to spend an hour and a half together analyzing. It was great fun, if a little ad hoc. I’ll be thinking about the best way for us to run these sessions in future so that we can get the most out of them. In the meantime though, for those that missed it, below are the three puzzle positions taken from the excellent ‘Invisible Chess Moves’ by Emmanuel Neiman and Yochan Afek.

I’ve set the board to display in puzzle mode. See if you can find the next move and do enough analysis to support your choice. Once you advance the game the solution will be displayed along with the required variations. Remember that you need to click on the bar above the board with the three dots in it to reveal and select the games in the viewer. At the end there is also a fairly wild game that we analysed at together.

This week we’ll continue with our online activities with another Microsoft Teams call on Monday the 6th followed by an online tournament on Chess.com. I’m also going to try out running some activities at other times and see how we get on. Here’s the schedule for this week.

Hopefully there should be something here for everyone and we’ll be able to keep you out of mischief!

I just have one final notification: 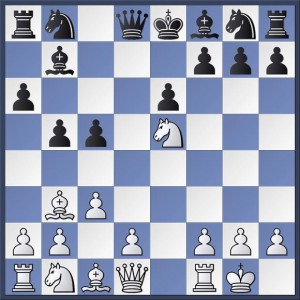 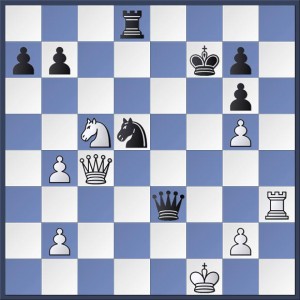