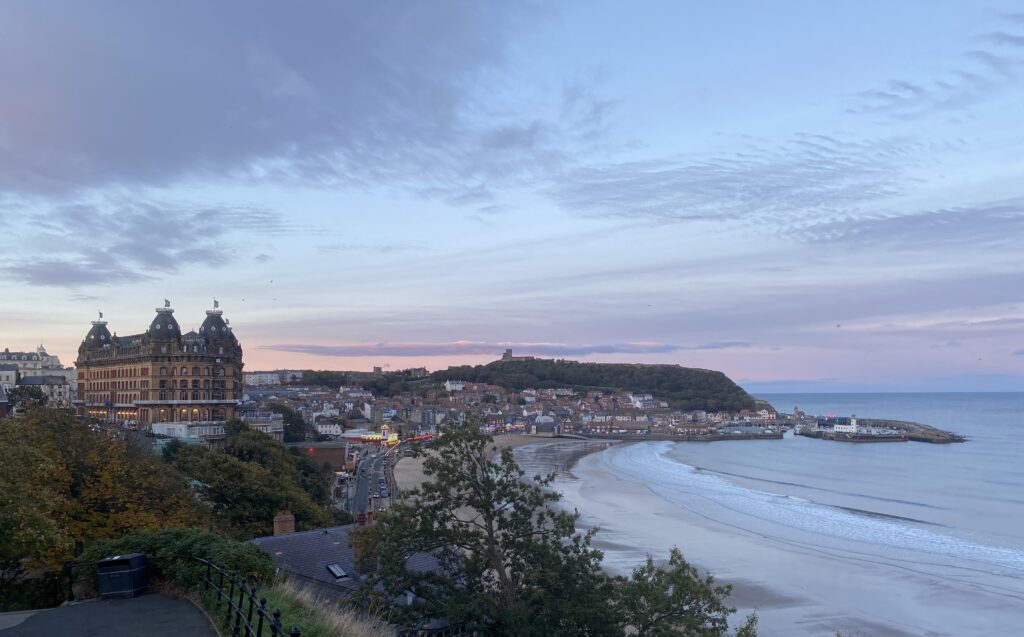 Scarborough South Bay on a lovely still Friday evening. When the weather is this benign it’s a very pleasant place to be.

I was at Scarborough over the weekend for the 2021 chess congress. For those who aren’t familiar with it, Scarborough hosts one of the largest weekend chess congresses in the North of England. Having cancelled last year’s edition (like so many weekend congresses) because of COVID, it was great to see the tournament return to the familiar venue of the Spa Centre in the south bay and heartening to see that the place was pretty much jam-packed. I played in the Open Section which was huge. There were just over 90 entries and then four more sections – a Major, Inter, Minor and Foundation.

There were plenty of familiar faces at Scarborough too. Martyn Hamer played in the Open as well along with Leo Keely from Huddersfield and our erstwhile friend Andy Bak who has played for us on many occasions but who plays most of his chess in Bradford. Dave Colledge from Belgrave played in the Major as well as Mick Connor who has also played for Hebden Bridge in recent years.

The top seed in the Open is our Grandmaster friend Danny Gormally who some of you will remember played in our Flood Relief Simul back in 2016.

I updated this page after each round with results and my games as well as a short description of some of the action.

The Open section is FIDE rated. That’s great news if you are looking to build your international rating but, as many of us have far more English Chess Federation rated games under our belts, it does throw up some interesting anomilies in the seedings. In my case my ECF rating is currently 1968 but my FIDE rating is only 1713. SO, instead of being in the top 30 seeding-wise I find myself seeded 86th out of 95. On that basis, in round one I was drawn to play Black against James Wheeler from Hastings & St Leonards. He’s one of the players in the section who doesn’t have a FIDE rating and his ECF is 1938.  I expected an even fight and that was exactly what I got.

The game turned out to be relatively uneventful. The opening was one that I was not that familiar with and, given my recent poor form and my traumatising 0 out of 5 in the Open in 4NCL Congress in Leamington in July, I decided that a safety first approach would be sensible. Feeling that I had neutralised his best chances to play for a win, my opponent offered me a draw as early as move 17 and I saw no reason to decline. The game is in the viewer below. It’s not hugely interesting. In fact the engine assesses that White has the better chances in the final position so I’m certainly not unhappy with the outcome.

Other results in the Open: Leo Keely, Martyn Hamer and Danny Gormally all won and Andy Bak lost. In the Major Mick Connor lost and Dave Colledge won.

On a wet and windy morning in Scarborough the serious business of the second round of the Chess Congress got underway at the Spa Centre at 09:30 this morning. In the Open, Martyn Hamer beat Beverley’s Tim Turner to progress to 2 out of 2. Martyn has a tough assignment this afternoon now having the Black pieces against FIDE Master Tim Wall. Meanwhile, Leo Keely went down to Andrew Ledger and I lost to Samuel Milson of Sheffield Nomads. This was an interesting and complicated game and I wasn’t too unhappy with how it went. I held my own and put him to the test until I blundered on move 29 and went down quickly after that. You can see that game in the game viewer below. It includes some fairly swiftly executed engine analysis which I haven’t had time to make sense of yet.

In the Major, Dave Colledge lost his game but Mick Connor won so they are both on 1out of 2 now.

The sun returned to Scarborough on Saturday afternoon and I finally managed to win a game! I was drawn against John Holliday from Bradford and managed to outplay him in a technical ending in which the comparative safety of my king versus the vulnerability of his was the paramount factor. I’ve posted the game in the viewer below. I’m quite pleased with how I played after he offered me a draw on move 27 after he’d played Qd6. I’d a long think over my  26th move a4 and felt that if I could initiate a minority to attack to expose his king then I could make life very uncomfortable for him. So it turned out.

Elsewhere, Martyn lost to Tim Wall and stays on 2 out of 3. Leo Keely won his game to join him and so did Andy Bak although he’s not playing tomorrow as he’s off to Blackpool to take part in a poker tournament.

In the Major Dave Colledge drew with the top seed Brendan O’Gorman to move to 50% on one and a half and Mick Connor lost and remains on 1 point.

I’m writing this at 13:00 on Sunday and the fourth round in the Open is not yet over but here’s a brief update on progress. In the Open, Martyn Hamer has won his game and now has 3 out of 4 and is in contention for the podium if he can win in the final round. It will be a tall order given the strength of the players on the top boards. Leo Keely lost his fourth round game and remains on 2 out of 4. Grand Master Danny Gormally drew his round 3 game yesterday but bounced back by beating FIDE Master Tim Wall in round 4 to give himself a shot as the tournament win in round 5. So far only one player has reached 4 out of 4 and that is Brandon Clarke. There are another four battling it out to try and join him on that score.

I lost my game this morning (and remain on 1.5 out of 4) against another 2100 rated opponent. It was another very exciting game played from the mainline of the Sicilian Dragon variation. I was pretty happy with the way I played and the engine tells me that I missed a winning continuation (admittedly a very tough one to find) at move 19. The game is given in full in the viewer below.

In the Major both Dave Colledge and Mick Connor won their games. Dave is now on 2.5 out of 4 and Mick is on 2.

The final round of a weekend congress is always a tricky one to navigate if you have nothing riding on the result. There are usually a good handful of players who withdraw before the last round to get on the road home a bit earlier and plenty of games get agreed as draws a bit sooner than they otherwise might. Tiredness also becomes more of a factor and it’s not uncommon to see the single move blunder a bit more frequently than in earlier rounds.

I certainly struggled to fully commit myself in my final round game and, as a result, I played the opening too casually and let myself drift a little bit in the middlegame. Such planless and aimless play gets punished in Open sections and my opponent, Damian McCarthy out me to the sword in convincing fashion. If truth be told I don’t think I had been able to put my fourth round game behind me as I missed a win having played the opening phase of the game well.

Elsewhere, Martyn Hamer lost his final round game to finish to tournament on 3 points. Leo Keely drew to finish on 2.5. Andy Bak had scored 2 points but he didn’t play either of the rounds on Sunday. The co-winners of the Open section were International Master Andrew Ledger of Sheffield and FIDE Master David Zakarian. they both scored a perfect 5 out of 5 which was always likely to be the requirement for victory in such a large Open. Top seed Grand Master Danny Gormally drew in round 3 and, though he won both games on Sunday to finish on 4.5, that was only enough for second place. No fewer than six players scored four points including my second round opponent Samuel Milson.

In the Major, Dave Colledge finished on 3 out of 5 and Mick Connor on 2.5.

So, that’s Scarborough done for this year. I really enjoyed myself despite a relatively poor outcome. Still I improved on my donut from Leamington this summer and my performance rating was actually above my FIDE rating so I’ll pick up some FIDE rating points – though I expect I’ll lose some ECF ones!