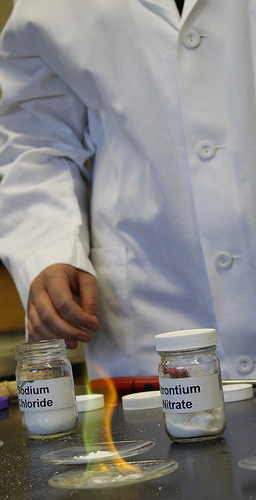 What's the secret recipe for success?

Prior to the beginning of this last league season, as I pondered my new duties as a team Captain, I had a hunch that there were three critical characteristics that were common to recent title winning sides in the Calderdale League. Now that the season is ended I’ve had the time to extrapolate some of the trends from the last 4 or 5 league seasons to test my theories and I think I can say that my instincts were pretty much correct. See what you think.

1.) Use a medium sized pool of players

The theory:
My feeling was that if you use too many players (say more than 10) during a season then your side loses cohesion and can lack team spirit. A Captain who has had to use a large pool suggests to me that he is struggling to put out his best team often enough to make effective and consistent use of them. Conversely a Captain who has used a small pool of players (7 or less) may become over reliant on his best players to perform and could suffer disproportionately as a result if one or two are occasionally unavailable or lose form.

The evidence:
Looking at the championship winning sides from the last four seasons’ I noticed that they used 9 (Hebden ‘A’ this season), 10, 8 and 9 players respectively. That Huddersfield ‘A’ used 16 players in their ‘A’ team this season (as opposed to 10 when they won the league last season and 9 in 2008-09) tells you all you need to know about their struggle to field a consistently strong side throughout the year.

It seems that all successful sides need a solid and strong core of players who are committed to playing in pretty much every match in the season. However, they also need a decent shortlist of reserves who can be called upon to step in when, as is inevitable from time to time, one of the regulars is unavailable.

2.) The team with the highest average rating wins

The theory:
It seems obvious that the Captain who can deploy 5 boards with the highest average rating across the season should win the league. This characteristic is closely aligned to the first one of course. It is all very well having super-strong players at your club but if they don’t play in enough matches they can’t affect the final outcome.

The evidence:
I looked at the top four sides from the last four seasons and worked out which five players they had used the most frequently during the campaign. Then I looked up their grades for that season and calculated a five player average in each case. Here are the results from the 2008/09 campaign.

Huddersfield used 9 players during the 08/09 campaign and their average rating was much stronger than everyone else’s. No surprises that they won the league then.

The sequence continues after that. In 2009/10 Hebden Bridge ‘A’ were the winners. Their 5 most frequently deployed players averaged 158. Huddersfield ‘A’, in second, averaged 156. Incidentally, Huddersfield used 17 players in that season and Hebden used 8. In 2010/11 Huddersfield ‘A’ re-took the title and averaged a rating of 164. Hebden ‘A’ were second with an average of 155.

So it’s that simple. If your 5 most frequently fielded players have the highest average rating compared to your rivals in the league you’ll win, right? Wrong! This season Hebden Bridge ‘A’ bucked the trend. Take a look at the chart below and see the top 4 teams’ average ratings from this season: 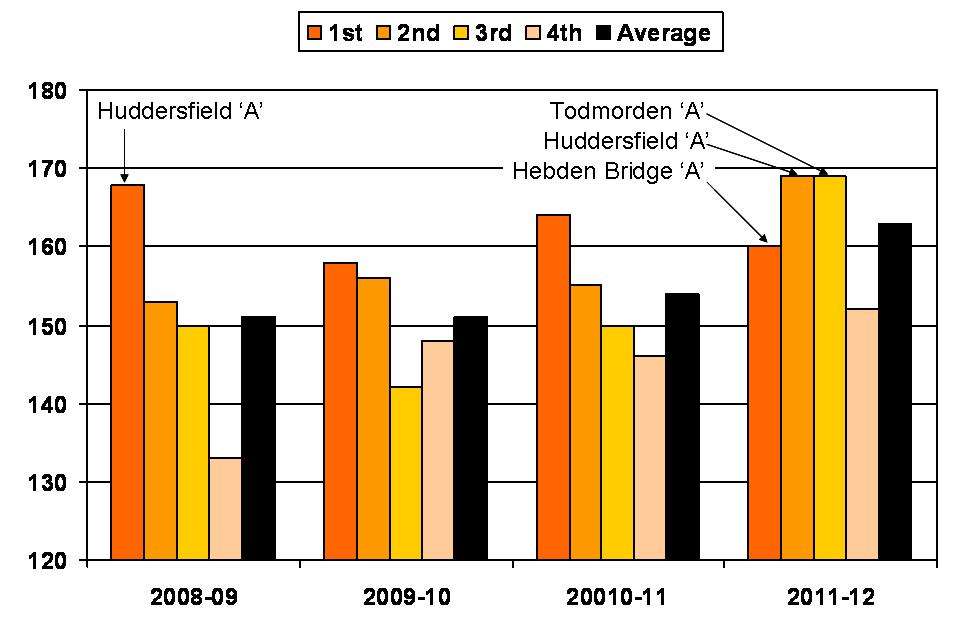 Hebden’s average was much lower than either of the two teams (just!) below them. Of course there are some mitigating factors. Our star performer, Darwin Ursal, ended the season with a much higher rating than he began and I used grades from May 2011 to do my calculations. However, even using his end of season grade our average only rises to 162. So it would appear that having the highest average grade is not necessarily a guarantee of success but it increases your odds.

3.) Draw on upper boards and win on the lower ones

The theory:
I have always reasoned that, generally speaking, the top players in the league are pretty much evenly split across the all the sides in the league. This is probably because the best players want to compete with their peers and therefore if they are in danger of being demoted down the board order in one team they will be tempted to swap to another.

The result of this even distribution of top players tends to lead to very evenly matched resources being deployed against each other on boards 1 and 2 in many matches. Any mismatches in playing strength between two sides are more likely to be found further down the board order and so, as a result, the teams with strength in depth tend to win the league and most of the points contribution comes from the lower order of their team. It stands to reason.

The evidence:
Again I tested this assumption by looking at the last five league 1 title winning sides and calculating the percentage of their board points secured on each board. I looked at the percentage of points contributed by boards 1 and 2 versus the percentage contributed by boards 3, 4 and 5. In a perfectly balanced expression of effort one would expect to see one fifth (20%) of the points scored on each board in a team. That would indicate that boards 1 and 2 should contribute 40% of all board points scored in a season and boards 3, 4 and 5 should contribute 60%. Here’s what I found: 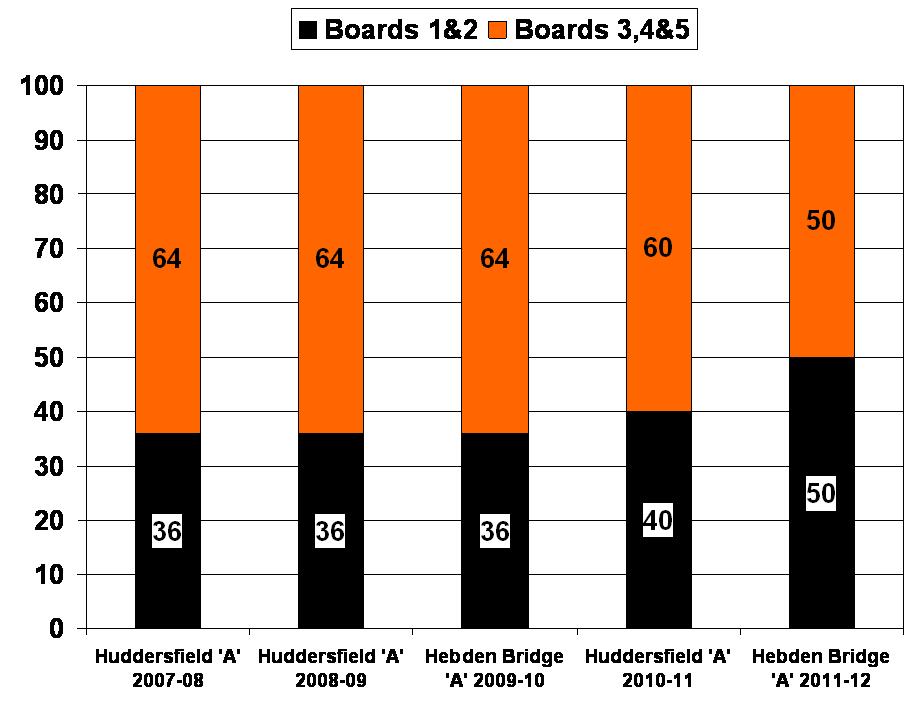 Going back to 2007-08, 08-09 and 09-10 we can see that boards 3, 4 and 5 were contributing 64% of the title winning side’s board points. In other words they were contributing 4% more than you would expect in a perfectly balanced scenario. This scenario did occur in 2010-11 when Huddersfield ‘A’ won the title. Of course at an individual level some variance in effort did occur but when adding up 1 and 2 and 3, 4 and 5 a balanced contribution appeared. This identical set of results from 07-08 to 09-10 certainly supports my hunch that the lower boards need to contribute a higher percentage of points than the top two in order to win the title.

But then we get to this season and something remarkable happens. Hebden Bridge ‘A’ scored as many points from board 1 and 2 as they did from 3, 4 and 5! This swung the percentage contribution from these boards massively (by 14%) compared to the 09-10 results. That speaks volumes about the form of Darwin Ursal, Matthew Parsons and Matthew Webb. Indeed, Hebden only lost two games on the top two boards all season. Both were on board 2 and the culprits were Dave Shapland and Pete Leonard!

The theory:
One final observation that seems too obvious to justify any sort of historical analysis, but was particularly important this season, is the need to take points off the other teams at the top end of the table. It seems a no brainer but this season the league’s strength in depth increased significantly (witness the average rating of the top four teams increasing from 154 in 2010/11 to 163 in 2011/12) and this meant it was much tougher than usual for the top teams to beat one another consistently.

The evidence:
Check out the mini-league table I developed below which shows how this season’s top four faired against each other.

The significant factor was that although Hebden didn’t win any more games than the other three they didn’t lose any games at all. In fact their one defeat in the season was to Belgrave who finished 5th.

Clearly, Huddersfield were able to dominate their closest rivals in a way that none of the top four were really able to do this year.

I suspect that, if the league continues to operate at a similar strength next season not losing to your nearest rivals will continue to be more important than winning some and losing some. I guess that requires a consistent team available and performing well.

So, what have we learned about the winning formula required for our league?

“All a bit sad!” I hear you cry. You may well be right but what do you think of these statistics? Do they reveal anything to you that I’ve missed, do you agree with my reasoning? Leave a comment and tell me what you think.