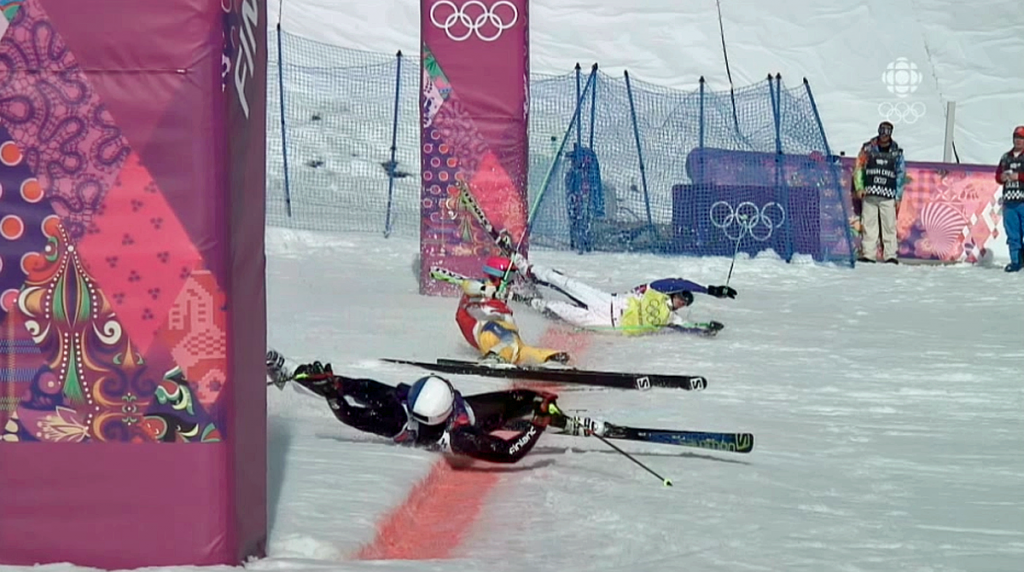 Remember this entertaining end to one of the ski-cross races from last year’s Winter Olympics in Sochi as three competitors fell and slid across the finishing line almost in unison. This season’s League 1 title race has been similarly close with no-one team able to assert their authority for long. Which of the final three contenders will step up to take the title this year?

It’s that time of year again! Calderdale League 1 now has just two rounds left to play following this week’s fixtures and there are still four teams in with a shot at the title.

On Monday night two of the title rivals got the opportunity to inspect each other’s credentials as they played at the same venue, though not against each other. At Todmorden Working Men’s Club, Todmorden ‘A’ began the night at the top of the table on board count (by one board!) as they hosted Courier ‘A’. Across the other side of the room Todmorden ‘B’, who are at the foot of the table and look doomed for the drop despite the doubtlessly spirited resistance they put up each match, took on the second placed side Hebden Bridge ‘A’.

Meanwhile over in Halifax, Halifax ‘A’ (the third team on the same number of match points at the top of the table) were playing host to Belgrave side in desperate need of a win to avoid occupying the other relegation spot at the end of the season. Finally, at Brighouse, Huddersfield were visiting in the hopes of capitalising on any slip ups from the top three as they lurked just two points behind them.

Your correspondent was at Todmorden, so let’s start by describing the action there. Hebden Bridge arrived with a good side but were unfortunately without the three strongest players who had helped them pull off the feat of winning two matches on the same night a few weeks ago. Despite this it looked like they would have enough to beat Tod ‘B’ Indeed the match got off to a great start for them (a hallmark of their recent form) when they won the first two boards to finish.

On board 3 Dave Shapland played patiently and solidly on the Black side of a Queens Gambit Declined Exchange Variation against Rob Collier. Rob has had some excellent results recently whilst Dave has been on poor form and so it seemed that the higher rated player was taking careful precautions not to be the victim of a giant killing. However, as the game progressed it became clear that it was becoming harder and harder for White to play actively and improve his position whilst Black had control of the half-open e-file and had successfully planted a knight on e4. All it took was one slip from Rob for Dave to pounce and sacrifice the knight on f2. This drew the White king into the open and Rob quickly realised that his goose was cooked.

Meanwhile on board 4, Todmorden’s Captain Dave Milton was giving his higher rated opponent John Allan a serious run for his money. In a Queen’s Gambit Accepted, Dave got and held onto a very promising looking position but his old enemy the clock, crept up on him and his standard of play diminished as his time crisis grew. Finally, John recovered from his poor start and went on to the attack and when a forcing sequence of moves netted him the exchange and a pawn, Dave resigned. It was 0 — 2 to Hebden.

With Todmorden ‘A’ playing just across the room it was too much of a temptation not to flit between the two matches especially as, at this stage of the evening, Hebden Bridge looked like they held winning advantages on boards 1 and 2 and were drawing at worst on board 5. The Todmorden versus Courier match looked like a much tenser affair although Tod took charge early on as Andrew Clarkson smote down Dave Colledge on board 5 with what looked like consummate ease. With such a large gap in ratings between the two players this was no surprise.

Around about the same time Pete Mulleady and John Morgan agreed a draw on board 3 leaving Todmorden a point to the good. However, on board 4 Carlos Gil Fresno was in horrendous time trouble against John Cawston and was at the added disadvantage of having to play a terribly complicated position. Cawston has been in excellent form recently so it looked like Courier might equalise there. The top two boards were close but on board 1 Todmorden’s Martin Hamer seemed to have built up quite a bit of pressure against Tony Slinger. On board 2 Phil Cook versus Dave Patrick looked like anybody’s game and was complicated enough to be a mystery.

Back in the Hebden Bridge match with Tod ‘B’ the visitor’s pace had slowed as on board 5 Richard Bedford and Martin Syrett agreed to a repetition in a queen and pawn ending that certainly appeared to be dead level. Unfortunately for Hebden though, things had gone wrong for Nick Sykes against Mike Huett on board 2. Nick had won a pawn and held a winning advantage I the endgame but he overlooked a cheapo and wandered into a knight fork that lost him a piece. Still, he had a pawn for the piece, looked like he might be able to win another and with so few pawns left on the board, Mike’s task was far from easy.

At least Hebden were able to secure the match win as Pete Leonard completed a dominating victory over Mick Connor. The home player essayed a line of the Catalan in which White sacrifices a pawn. On this occasion however it didn’t seem like he managed to get any compensation as Pete simply kept the pawn and advanced menacingly on the queen’s side. Connor defended tenaciously but eventually Hebden’s Captain broke through to seal the match win.

Back over at the Todmorden ‘A’ match the situation changed from being tight to being a landslide victory as they rattled off victories on the remaining boards in quick succession. First Martin Hamer’s pressure was finally too much for Tony Slinger to resist. Similarly on board two Phil Cook applied more and more pressure until Dave Patrick cracked and finally, on board 3 Carlos Gil Fresno not only survived the first time crisis but improved his position and then somehow defended another assault wave with his flag hanging to even beat John Cawston on time!!! This was a bonus result for Tod as a draw seemed the best Gil-Fresno could achieve. However the result left them with a superb final score line of 4.5-0.5.

The only game now remaining in play was the board 2 match between Mike Huett and Nick Sykes in the Tod ‘B’ vs. Hebden match. Nick, obviously furious with himself for blundering away a winning advantage carried on playing a piece down in the end game and it soon became clear Mike would have to play accurately to convert his material advantage because there were so few pawns left on the board. However, convert he eventually did to give his team’s score line a more respectable look.

Here is the score card for the Hebden match:

So, Tod ‘A’ and Hebden had done their job with Todmorden increasing their board points advantage over Hebden to two. Over at the Lee Mount Club in Halifax the hosts were also keeping themselves right in the hunt as they thrashed Belgrave 4½ — ½. Bill Somerset drew with Ian Hunter on board 1 but the rest of the games went to Winston Williams, Darwin Ursal, Richard Porter and Carlos Velosa in board order. Halifax’s league statistics are now identical to Hebden Bridge’s and these two teams play each other at Hebden on the 30th of March with the winner staying in the title race and the loser dropping out of it! These are the two form sides in the League right now so it should be an epic encounter.

The final match of this round of fixtures took place in Brighouse were the hosts faced a very strong Huddersfield side who were licking their wounds from two successive league defeats and desperate to stay within a couple of points of the leading trio. On board 1 Robert Broadbent did very well to draw with Leo Keely and on board 4 Paul Whitehouse did even better to draw with Dave Keddie but the other three games all went to Huddersfield with Mitchell Burke winning against Bruce Bendall on board 2, Matthew Parsons beating Nick Hudson on board 3 and Dave Tooley beating Ron Grandage on board 5.

Below are the games from the Hebden Bridge match against Todmorden ‘B’. My thanks as always to Pete Leonard and Nick Sykes for their annotations.

11 Responses to “Yet another photo finish!”