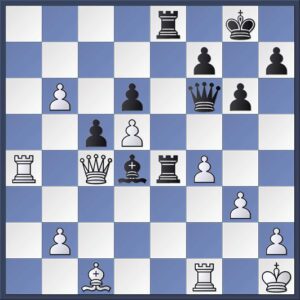 Gordon vs. Hill. White has just played 30.g3. How should Black proceed here? Answer in the report below.

As mentioned in last week’s post, online chess competitions are booming to cover the ongoing gap left by the absence of over the board chess. Last Tuesday the 4NCL’s (Four Nations Chess League) third online season for their team competition began. This week saw their individual competition kick off. This is a seven round Swiss System played every other Tuesday between the 2nd of February and the 27th of April. There are four sections: an Open which has 63 participants, the Major (for players rated under 2000) which has 47 participants, the Intermediate (U1700) with 68 participants and a Minor (U1400 and beginners) with 39 participants. With a time limit of 45 minutes for all moves plus 15 seconds per move this (like the team competition) is the closest thing we’re going to get to Classical chess time controls until we can get back to playing face-to-face.

For the second edition of this individual competition (which took place between September and December last year) your editor was the only member of the club to take part. For the record I scored a fairly miserable 2.5/7 in the Open section. This time there are four players affiliated with the club involved across the top two sections.

Let’s start with one of our latest members. Ollie Hill only joined our Lichess community last week and has no English Chess Federation rating but he can clearly play a bit as he bravely decided to have a go in the Open Section. He’s the only unrated player in the section and was rightly anxious about getting hammered although he felt the experience would be ‘instructional’. As it happened, Ollie managed to come out on top after a complicated and messy struggle against the 31st seed in his section, Sean Gordon, who’s rating is 1909. Playing a Benoni, Ollie missed a couple of chances to exchange the frequently bad light squared bishop and seemed to be hanging on early in the middle game. However, with both players dropping in the odd inaccuracy, the game remained balanced.

The critical moment arrived in the diagram position given above. Ollie (playing Black) has a winning position here after his opponents previous move 30.g3?? which is a blunder. Ollie played the very natural looking response 30…Bxb2?? which appears to be winning him a pawn but in fact transforms the position from being a Black win to being a White win! His opponent found the correct idea initially by giving up his queen for two rooks with 31.Qxe4 Rxe4 32.Rxe4 but after 32…Bxc1 he missed the winning continuation which is not to recapture the bishop on c1 (as he did in the game and went on to lose) but instead to play 33.Re8+! Kg7 34.b7 when his b-pawn cannot be stopped and White will simply need to figure out how to walk out of some spite checks.

After this adventure, Ollie went on to win with his queen against White’s two rooks as he was able to pick up the White passed b-pawn and then had too many targets to attack. Despite being low on time, Ollie converted nervelessly. Congratulations to him on a fine achievement in his first competitive online game!

Elsewhere, in the Major section, Dave Shapland, Pete Leonard and John Allan were all hoping to win their round 1 games against lower rated opposition. Dave and John did indeed manage to do this fairly easily as they had White and their opponents made critical blunders that led to sudden defeats. Pete’s opponent however proved more resilient and managed to hold Pete to a draw with a knight and pawns versus bishop and pawns ending. Pete will feel he missed chances to pick up a full point. 22…Bh3 instead of Bd7 looks like a significant opportunity. But, in a competition over 7 rounds, a draw, even against a lower ranked player, in round 1 could enable him to score well in subsequent rounds as he may be able to avoid the highest rated players in the section for the time being. Let’s see if his ‘Swiss Gambit’ will turn out well for him in the long run.

All four games by the Hebden Bridge contingent are given in the game viewer below.

For the benefit of those who are uninitiated (or simply can’t remember as it’s been so long!) the game viewer above contains all four games played on Tuesday night. It will automatically scroll through all of them one after the other unless you tell it to stop by clicking on the ‘=’ button below the board. To select the game you wish to view click on the ‘…’ symbol in the white box above the board. This will reveal a drop down menu for you to choose from and when you select your game will appear. You can navigate forwards and backwards using the arrow buttons beneath the board or click on the moves in the text box on the right. Most of the annotations in these games have been generated by Lichess’ in house engine which creates auto-analysis for every game played (one of the tools they use to track down and punish cheats!) and are therefore part of the download when you export games from Lichess to your own chess engine or database.

One Response to “4NCL Online Spring Congress gets under way”