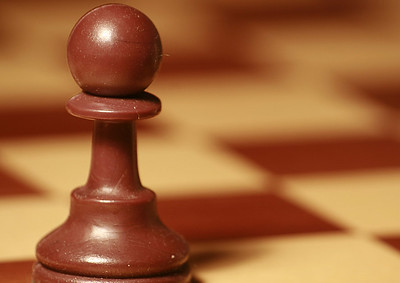 From time to time we have a little fun with Pete Leonard about his principled approach to accepting pawn sacrifices. As he mentioned in his comment to our last post, his inclination is always to accept whatever is on offer and “put the money in the bank/your pocket”. Absolutely nothing wrong with that approach and Pete is a strong enough player to know (at least some of the time!) when it’s not a good idea to take the material.

Pete was at it again last Tuesday as round 2 of the 4NCL Online Spring Congress took place. This time though there was an interesting counter balance to his success in that Dave Shapland’s opponent went pawn grabbing and got himself into the hottest water as a result.

But let’s start with Pete. Having started the tournament out with a draw he was doubtless keen to get a win under his belt and, with the White pieces and a lower rated opponent at hand, he duly bagged the full point. His opponent played the Scandinavian and ventured a dubious gambit on move 3. Pete ate the ‘mushroom’ and seemed to be duly nourished as a result. On move 16 Pete’s opponent generously offered him another tasty morsel but he got very little in exchange  for it – managing only to exchange off one of Pete’s bishop’s for his knight. Pete saw no reason not to have another bite and quote right too. By move 20 he had a stable two pawn advantage and a passed -a pawn of his own to boot! The rest was relatively straight forward and Pete converted comfortably.

Dave on the other hand had won his first round game and was therefore expecting to face a stronger opponent than in round 1. Indeed, his opponent, Steve Wylie, did play well early on in the game and responded sensibly to Dave’s provocative approach to the London System which involved him playing 1d4 c5!? and then after 2.c3 venturing 2…Qc7?! which must be dubious but prevented White from playing the move he wants to play 3.Bf4. The main problem for the Steve was that he played too slowly. This meant that, when the position sharpened on move 22, he didn’t have as long to calculate and assess variations as he might have liked. At that point in the game with 22…Nc5?! Dave offered his opponent a choice of pawns to grab on a7 and e7. Steve grabbed the e7 pawn with his rook and then, when Dave took his d-pawn he speculated on maintaining his material advantage with 24.Rxa7?? But this time the pawn was poisoned. With White’s rook and queen away on the a-file, Dave had time mount an attack on the enemy king. When Steve then grabbed a second hot pawn with 26.Rxd6? it was pretty much all over and Dave’s attack broke through.

Also playing in the ‘Major’ section, for players rated under 2000,  was John Allan. He too had won his first round game and was looking to advance to 2/2. The pawn grabbing theme continued here when John responded to his opponent’s Catalan Variation by accepting the gambit pawn on c4 and holding onto it. White never really seemed to get anything much for the pawn although the variation is perfectly reputable. By move 16 John had picked up a second pawn, this time through a blunder rather than a sacrifice, and he calmly proceeded to mop up, never giving his opponent any counterplay and winning more and more material.

So much for the three players in the Major. How did Ollie Hill get on in his second round game in the Open section. Readers may remember that, last time out, unrated Ollie snatched a famous win in his first game in a competition of this kind. Naturally, his ‘reward’ was a draw against a much stronger opponent in round 2. Indeed Anastasis Kafetzopoulos, with a rating of 2131 proved to be a completely different proposition. Ollie played the Alapin Sicilian with 2.c3 but, sadly, he fell into a tactic early on in the game that cost him a piece and, after that, his opponent clinically put him to the sword. Still, there are five rounds left and Ollie will come up against opponents that he can expect to do well against later in the competition.

Below are all of the games mentioned above with some engine annotations from the Lichess house engine – Stockfish.

One Response to “Pawn grabbers anonymous”