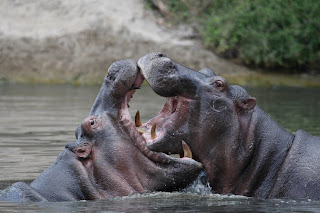 Well, it’s been a few months since I posted now. Time flies when you are having fun! My wife and I went to South Africa for our honeymoon for a couple of weeks and had the most amazing time. Of course when you get back from such an amazing adventure it’s easy to feel a bit jaded and restless. Between that and the build up to Christmas I simply haven’t got round to posting. The longer it’s been the harder it is to break back into it. Now that I’ve written this post I can feel the momentum building again!

The main impetus for this post was to report on the epic showdown between my team, Hebden Bridge A and Huddersfield in the Calderdale League. Both teams came into the match unbeaten. Indeed, neither team had even lost one game! As you may remember me relating in one of my earliest posts, Huddersfield are the current champions, the strongest team in the league on paper and the favourites to win again this year as a result. I gave us a chance of upsetting the established order at the beginning of the season, but thought it would be difficult for us.

We played the match on neutral territory in Halifax as Huddersfield’s usual home venue wasn’t available and this possibly gave us a tiny psychological advantage as I’d guess that “fortress Huddersfield” has not been breached in the Calderdale league for a number of years.

As we were the “away” team, we played with black on all boards and were marginally out-graded on every board except the top board (where both players had the same grade).Unusually for a fixture at this level the game on board one was the first to finish and it finished in our favour. Our top board seems to have Huddersfield’s top board in his pocket at the moment. He scored 1.5/2 against him last season and I’d not be surprised if he repeats or improves on this result again this year. It would certainly be fair to say that Huddersfield’s board one needs to revise his choice of openings if he is to try and buck the current trend. He played a Four Pawns Attack against our man’s Benoni and (as I’ve tried this line against him myself on several occasions) I can vouch for his ability to absorb the pressure and then kill you on the counter attack. 0-1 to Hebden Bridge.

Next to finish at the other end of the match was board five. Huddersfield’s captain equalised the match score by taking advantage of a positional slip from our player fairly early in the opening. White won a pawn and maintained a positional bind that our man couldn’t break. The rest was about 2 hours of torture. 1-1

The remaining three boards went right to the very death and, as the tension in the room started to become really acute I managed to salvage a draw in my game on board 4. I had gained a pretty good position out of the opening and begun to start looking for ways to press for an attack when I over looked a defensive resource and lost a knight for a pawn. The only other compensation was that I had a good initiative and some pressure against my opponent’s king which meant that I was pretty much obliged to just “go for it”. My opponent defended accurately but in fending off my attack he lost another pawn. It came down to an end game where I had a knight and four pawns against white’s bishop, knight and two doubled pawns and I was able to hold on for the draw and even overlooked a possible winning chance (see below). So with two games to finish it was still level pegging. 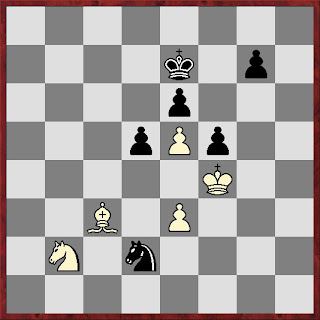 In the position above, I’d been hanging on for a while and by now was fairly confident I could hold for a draw. “Oliver” has just played 46.Bc3 to which I replied (pretty much straight away I’m ashamed to admit) with Ne4. Of course had I thought for a few minutes I might have found:
46…g5+! 47.Kxg5 Ne4+ 48.Kf4 Nxc3 winning back the bishop and maintaining a pawn advantage. It must be said that the resultant position looks hard for black to win but I could have had fun trying!

Next up our board three took a full point with a win on time. He had the better position when the game ended and had put his opponent under pressure for a long period. This had translated into a big time advantage on the clock which proved decisive. Suddenly we were up one point with one game to finish and looked like we might pull off a massive upset.

On board two our captain had been holding on in a tricky position for a long time. In a double rook ending Huddersfield’s man had a space advantage but it looked very difficult to exploit. Right up until the end it looked like our captain’s rear guard action would get us the draw we needed but sadly it wasn’t to be. White managed to get a passed pawn and it was all over. Final score 2.5-2.5!

What all this means is that Hebden Bridge A have a tiny advantage in the league based on our better “board count” in all matches (we have 19 wins to Huddersfield’s 16 over 5 matches played each).However, before the half way point is reached we still have to play our B team (who are third in the league) and Huddersfield play Halifax (who are bottom) so that points gap could be reduced to 1 point if we only win 3-2 and they win 5-0, which is entirely plausible.

So, if neither side drops any points for the rest of the season it could all come down to the last match in April when we will be at home and playing the white pieces. That is a fairly mouth watering prospect. Now we need to make sure we reach that match unbeaten!

2 Responses to “A Heavyweight Encounter”