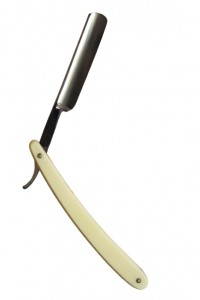 Hebden Bridge ‘A’ have been to the barber’s shop again this week!

Monday night saw the return of Calderdale League 1 action as the reigning Champions, Hebden Bridge ‘A’ hosted the freshly promoted and resurgent Halifax ‘A’ at the Trades Club. The hosts were under no illusions as to the challenge posed by the visitors who have strengthened themselves significantly since the start of last season. Indeed only one player, Captain Carlos Velosa, was playing in the side at the start of the 2011-12 campaign when the team was in division 2. The addition of Tony Ibbitson, Bill Somerset and now Osman Yousif has been augmented further by the return of last season’s star performer (when he helped Hebden win the title) Darwin Ursal.

Hebden themselves were forced to conscript in new recruits. With Pete Leonard’s month-long absence on holiday to the west coast of America just beginning Dave Shapland drafted in another of his colleagues from the Yorkshire Chess website, Andy Bak. This meant Hebden were even stronger on paper than usual. It was evident right from the start that the match was likely to hinge on the top two boards where Halifax had fielded Ursal and Somerset to face Hebden’s Matthews Webb and Parsons. On paper these four looked very evenly matched whilst the other three boards saw Hebden out grading their opponents (although ungraded Yousif was something of an unknown quantity for Nick Sykes to face on board 5).

Unusually for a match in this division the first game to finish was the board 1 encounter where Hebden’s Matty Webb decided to deploy a very eccentric line against Darwin Ursal’s Sicilian Defence. With 2.a3 and 3.b4 Matty played a sort of Wing Gambit where he got rapid development in exchange for his sacrificed pawn. The game developed sharply and chaotically. Matty got his king castled safely whilst Darwin elected to tuck his king away on the king’s side without castling in order to keep his king’s rook on the h-file. This turned out to be critical because Ursal was able to launch a decisive attack on Matty’s king down this avenue. The game was full of interesting lines and Matty has annotated his game in the viewer below. It’s well worth a look.

Meanwhile on board 5 Hebden’s ‘Syko’ was in typically merciless mood. Nick has had as good a start to this season as he had an end to last. He’s unbeaten (aside from a defeat to Darwin in the Summer Knockout last week) and looks very dangerous at the moment. His opponent misplaced his queen’s knight in the opening stages of a Queen’s Gambit Exchange Variation and Nick exploited this inaccuracy very efficiently before some more mistakes led to catastrophe for Black. The score was level.

At this stage of proceedings prospects looked bright for Hebden. On board 2 Matthew Parsons had won a pawn against Bill Somerset and seemed to have all the chances of playing for a win with a draw in hand. Andy Bak had built up a sizeable positional advantage against Carlos Velosa and was well ahead on the clock and Dave Shapland had succeeded in navigating his way through Tony’s off-beat French Defence to reach an equal position in their game.

Suddenly though, it all went wrong. First of all Andy blundered a piece at the moment when it appeared his attack was about to reach its culmination. Bitterly disappointed with himself he gamely kept his head and hunkered down to the defence of a desperate looking position. Then board 2 swung dramatically as well. Somehow Matthew’s advantage dissipated and suddenly he was pawns down and facing a dead lost bishop and pawn ending.

For once Hebden’s Captain came to their rescue (it’s been a long time coming!) as he and Tony scrambled to time control he scooped up an extra pawn to take into an opposite coloured bishops ending. It looked to be dead drawn as Dave’s passer on the a-file would queen on the same colour square as Tony’s bishop. However there were some tricks and fortunately for Hebden the Black king advanced too far up the board in pursuit of a weak looking pawn before he realised that it was poisoned. On the other side of the board Dave’s king had infiltrated far enough into the enemy came to force home the a-pawn or the sacrifice of Black’s bishop. Hebden were 2-1 up but were would their extra half point come from?

In the end it came from Andy’s tenacious defence on board 3. Carlos was desperately short of time and struggling to make progress when Andy suddenly claimed a draw by threefold repetition. The players stopped the clocks and went off to another board to check that he was correct. He was and Hebden had their draw.

Last to finish was board 2 where Bill succeeded in converting his comfortable advantage against a disappointed Matthew. This was the first league defeat he had suffered for over a year. Not a bad run at all.

This result leaves Hebden Bridge ‘A’ in a weak position as far as their title defence goes. They lie in fifth place after three matches and although they have played two of their most closest rivals in two of those ties both of them were played at home and they didn’t win either.

Elsewhere, Huddersfield kept up a consistent string of results to remain the only side in the league with a 100% record as they notched up their third consecutive 3½ – 1½ victory over Belgrave away. They are top with 6 points. Todmorden ‘A’ signalled their intent to claim the title by moving into second place and crushing Brighouse 5 — 0 at home! They now have 5 points. Halifax have 4 and were joined on that score by Courier ‘A’ who beat Todmorden ‘B’ 3½ — 1½. The champions are behind these two teams on 3 points and have some catching up to do. In the next round they play Brighouse away in a match they must win if they are to have any hopes of retaining their title.

One Response to “Another Close Shave”