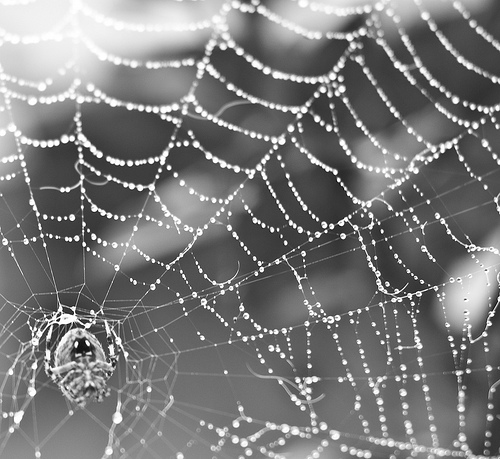 “Come into my parlour” – Matty Webb snared Dennis Breen with decisive effect for the ‘A’ team on Monday night. Until now I’ve resisted all temptation to use a spider’s web image for a Matty related headline but I couldn’t be expected to stay strong forever! This image is used under Creative Commons licence and is taken from Gregory Jordan’s Flickr photostream

Your web editor has been away on holiday for a week and managed to miss two rounds of league action in the process. Therefore this week’s post offers an update on the most recent action in leagues 1 and 2. Let’s start with Monday night’s league 1 round up.

Hebden Bridge ‘A’ entertained Brighouse at the Trades Club and they were in desperate need of a victory to ignite their stuttering title defence. Their opponents came with a strong team whereas the hosts were missing two regulars in the form of Dave Shapland and Pete Leonard. In their places were drafted Andy Leatherbarrow and Martin Syrett from the ‘B’ team. On paper the match looked fairly balanced with Hebden having a small grading advantage on most boards. Would that prove to be enough?

In the end it was, but only just as Brighouse acquitted themselves nobly. On board 5 Paul Whitehouse beat Martin Syrett and boards 2 and 3 Robert Broadbent and Bruce Bendall held to draws Hebden’s Matthew Parsons and Nick Sykes respectively. In the end the match was decide by boards 1 and 4. On 4 Andy Leatherbarrow continued his red hot form with a victory of Nick Hudson and on board 1 Matty Webb (who was given incorrect instructions by his Captain to travel to Brighouse’s venue) arrived 40 minutes late and was forced to play very quickly against the ever-dangerous Dennis Breen. At one stage Matty’s position looked bad and the match hung in the balance but then Dennis blundered and resigned immediately rather than forcing Matty to play the game out in time trouble.

Elsewhere in division 1 the results were favourable to the champions as they gained ground on all their rivals except the current league leaders Huddersfield who beat Todmorden ‘B’ 3 — 2 at home. Wins by Mitchell Burke and Dave Keddie on the top two boards proved decisive.

At the Belgrave club in Halifax the match outcomes were much more appetising from a Hebden Bridge perspective. Courier ‘A’ drew with Todmorden ‘A’ and Belgrave beat Halifax ‘A’ in a slightly surprising but hard earned result which included a particularly fine result for Malcolm Corbett who beat Darwin Ursal. Halifax, Courier and Todmorden had all been ahead of Hebden at the start of the night’s play but these results ensured that Hebden were able to close the gap on Todmorden (in second place) to a single point and leap-frog Courier (on board points) and Halifax to move into third position. Of particular interest was the game between Robert Clegg and Andrew Clarkson on board 3 of the Courier vs. Todmorden match. A highly theoretical Grunfeld variation was played and Robert capitalised mercilessly on a slip by Andrew to win in fine style. The game is published in the viewer at the end of this article. Our thanks go to Adrian Dawson for providing the game and comments on this game.

Now on to league 2. The fourth round fixtures were played on the 15th of October and Hebden Bridge’s ‘B’ and ‘C’ teams were in action at home whilst the ‘D’ team travelled to Todmorden ‘D’. John Kerrane picks up the story of these matches.

Hebden Bridge ‘B’ continued their powerful start to the Calderdale Chess League season with a 3½ — 1½ win at their home venue, the Trades Club.

Against a strong Courier ‘B’ side, the players on the top boards found it hard going, but their strength on the lower boards saw the ‘B’ team through to another comfortable victory.”

Meanwhile, also playing at home, Hebden Bridge ‘C’ saw off Halifax ‘C’ by the same 3½ — 1½ score. Despite a default by the visitors, this was a strong showing by the ‘C’ team, who still won the majority of the games played.”

The individual scores where:

The ‘D’ team took a strong team to Todmorden, where they unexpectedly lost 3 — 2 to Todmorden ‘D’. Although Robert Murray maintained his 100% record, and Kyle Sharpe also picked up a good win, the match was lost on the lower boards.”

I don’t yet have all of the games from the matches mentioned above but once they are available I will publish them in a future post. In the meantime the viewer below has the Clegg vs. Clarkson game mentioned above and also Nick Sykes’ draw with Bruce Bendall from last Monday night as well as Josh Blinkhorn’s defeat at the hands of Dave Colledge from the previous week which was only Hebden Bridge ‘B’s second lost game of the season! Thanks to Josh, Nick and Adrian Dawson for sending these games in for publication.

01/11/12: The games viewer below has now been updated with all available games from the matches in this report