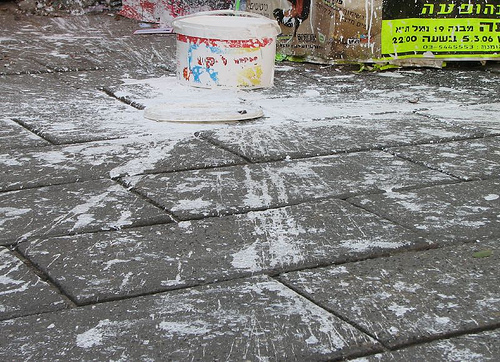 Martin Syrett’s ‘B’ team didn’t waste any whitewash in their match against Todmorden ‘C’. This image is used under Creative Commons and sourced from TLVshac’s Flickr photostream

On Monday night Hebden Bridge Chess Club saw plenty of action as all three of our League 2 sides went to battle at the Trades Club. Hebden Bridge ‘B’ welcomed Todmorden ‘C’ and Hebden Bridge ‘C, having faced the ‘B’ team on match day 1 now faced a challenge from the ‘D’ team.

Before we get into the match reports perhaps you’d like to challenge your analytical skills by assessing an interesting position from the ‘B’ team’s match below. 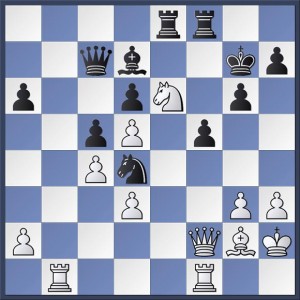 White has just played 25.Ne6+. If Black recaptures what will this lead to:

a.) Black wins a pawn and secures a small advantage
b.) Black loses material and White achieves a winning position
c.) Material remains even and the game remains balanced

You can find the answer in the notes to the game which is the second in the game viewer at the end of this post.

Now back to the action. Hebden Bridge ‘B’ are hot favourite’s to get themselves promoted straight back to League 1. The side is certainly strong enough to make it and, after crushing the ‘C’ team 4-1 in the opening round of the season the ’B’s managed to go one better against Todmorden ‘C’ whose top board was rated lower than Hebden’s bottom board!

On that board Martin Syrett was the first to finish off his opponent and he did so in fine style with a pretty discovered check mate after a strong attack broke through Tom Webster’s defences. It wasn’t too long before Josh Blinkhorn and Dave Sudgen had matched their captain’s performance with wins on boards 3 and 4 respectively. Josh built up a typically strong attack on his opponent’s king whilst Dave won material early in the game and simply held on to it to convert the full point easily.

It was on boards 1 and 2 Todmorden put up the greatest resistance. Dave Shapland turned out for Hebden on board 1 and won a nervous affair against Tod’s captain, Dave Milton to finally end 7 months without a win in the Calderdale League. He won a pawn early in the game but had to acquiesce to the exchange of queens to achieve this and that meant a long, drawn out grind for victory. Plenty of chance for Milton to test his opponent’s nerves then. Shapland played conservatively but succeeded in stamping out any chances of Black counter play before winning a second pawn. That should have been the end of it but Milton held on resolutely despite getting into a desperate situation on the clock. He made time control and even managed to set Shapland some challenges in the end game but eventually, after some careful calculation at the end of the game, Shapland scored his point and breathed a massive sigh of relief.

That just left board 2 and here Hebden’s Andy Leatherbarrow had opted for a closed variation against Graeme Bowker’s Sicilian. After some careful manoeuvring Andy introduced a tactic to open the h1-a8 diagonal favourably for his light squared bishop. Bowker fought valiantly when it turned out that the position wasn’t quite as clear cut as it had first appeared but in the end he was forced to give up his last piece to stop Andy’s passed a-pawn and then it was just a matter of time before Andy broke through. 5-0 to Hebden sounds the alarm for the others in this division. Next Monday though they travel to Halifax ‘B’ who would, on paper at least, appear to be their main rivals for the title.

On the next set of tables the ‘C’ and ‘D’ teams were battling it out with four players each after the bad weather caused some last minute withdrawals for both teams. The ‘D’ team started the season well with a convincing away win. With Robert Murray augmenting their strength on board 1 they seemed to have a decent chance of giving John Kerrane’s men a run for their money.

Sadly, it wasn’t to be as two members of the ‘D’ team lost very early in the evening. Poor old Chris Greaves lost so quickly to Steven Priest on board 2 that one or two visitors though the ‘D’ team must have defaulted on that board. Unfortunately Chris’s effort is likely to re-appear in the end of season “bloopers” video for he made a succession of dreadful mistakes culminating in the over look of mate in 1 on move 8.

Chris’ Captain, Danny Crampton did not last much longer although he made rather more moves in his game against Neil Bamford and seemed to be doing ok out of the opening. With no way back from a 2 — 0 deficit the ‘D’ team did at least manage a consolation point when Robert Murray beat John Kerrane. John has had the pleasure (or otherwise) of facing two of his former pupils in the first two matches of the season. He managed to beat Matthew Wedge-Roberts and upset the form book in round 1 but in this game Murray simple kept solid and waited for an error from Kerrane. It duly came and Robert put the game away with smooth efficiency.

In the last game of the match newcomer Daniel Rich saw off the ‘D’ team’s Spike Leatherbarrow to secure a comfortable 4 — 1 for the senior team.

Elsewhere in League 2 Todmorden ‘D’ went down 1½ — 3½ at home to Halifax ‘B’ while Halifax ‘C’ went down by the same score line at home to Courier ‘B’.
This leaves Hebden ‘C’ and Halifax ‘B’ on 100% at the top of the table and due to play off for the right to sole leadership on Monday at Halifax.

Below are all the games (a couple are only fragments due to illegible score sheets!) from Monday’s matches at the Trades Club.