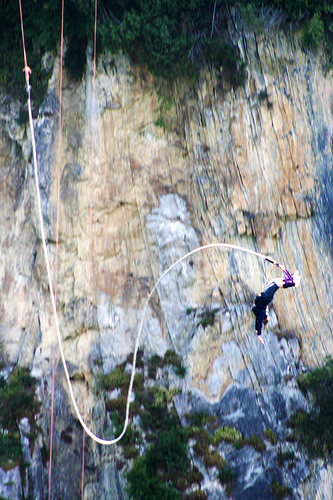 Boink! Hebden ‘A’ bounced back from their opening round defeat. This image is used under Creative Commons and sourced from charlotte jacques Flickr photostream

On Monday night a wounded Hebden Bridge ‘A’ travelled to Todmorden to take on League 1 newbies Todmorden ‘B’. When they arrived they found that their opponents had seriously strengthened the line up that took them to the League 2 title last season. In had come Neil Suttie and Alastair Wright (who had both played roles in Todmorden ‘A’s title bid last year) Mike Connor (a strong new recruit) and seasoned veterans Paul Edwards and Mike Huett. This was certainly going to be no push over.

Hebden however, having injured their pride in losing their first home match of the season to Huddersfield, responded strongly and Todmorden bore the full brunt of the rebound effect as the away team ran out convincing 1-4 winners on the night.

Certainly the score line does not reflect the nature of the struggle for the Champions were forced to prove their mettle by a determined home effort. The first board to finish was board 1 where Neil Suttie succeeded in putting Matthew Parsons under a good deal of pressure. Matthew said afterwards that he felt this was the closest he had come to losing with the Black pieces for quite some time. It transpired that he had played an inaccurate continuation early on in the game and Neil was able to maintain pressure whilst also simplifying the position. The up-side to this outcome for Neil was that Matthew never really had any winning chances in the game. On the downside the early wood chopping meant that the strength of his opening advantage was soon diluted and Matthew was able to equalise through some careful and accurate play. A draw was agreed shortly after the endgame had been reached.

The other four boards were hotly contested as well. Ultimately the higher rated Hebden players proved their superiority on board 2 and 3 as first Matty Webb and then Pete Leonard converted patiently accumulated positional advantages and drove them home with some forceful tactical play. Pete’s win was particularly satisfying given his recent run of poor form which ended with last week’s missed opportunity against Huddersfield. Matty could rightly feel pleased with himself after beating one of the league’s most proficient handlers of the White pieces. Alastair virtually never loses with White so kudos to Matty for delivering such a smooth performance.

Sadly, on board 4, Hebden’s Captain continued to struggle with whatever chess gremlins are currently ransacking his mind. Dave Shapland can barely remember the last time he won in an ‘A’ team fixture (it was February away at Huddersfield ‘B’ — Ed.) and once again found himself staring down the barrel of a dispiriting defeat until he was rescued from Paul Edward’s clutches by the ticking of the clock. 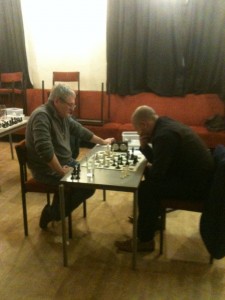 Mike Huett (left) had a long struggle with the Syko and came off worst!

Dave must be given some credit for continuing to try and play ‘interesting’ chess. This week he deployed Bird’s Defence against Paul’s Spanish hoping that it would set his opponent some unusual challenges. It all seemed to be going rather well until suddenly Paul found a nice tactical resource which turned the game on its head. In the final position, Dave’s king was virtually naked, his rooks undeveloped and the centre of the board straffed by Paul’s rooks and bishops. And yet, Paul didn’t have enough time to find the coup de grace and, with his flag hanging, he took the option of perpetual check, much to Dave’s relief.

This just left that perennial late-night finisher, Nick Sykes to complete his game. The result of the match was now decided and Nick appeared to have very little reason to continue pursuing a full point against an obstinate Mike Huett. To his great credit, our Syko did not offer his hand but knuckled down to a final effort. He duly won the exchange shortly after the time control and soon Mike was forced to concede defeat. Considering how close the title race was last season every extra half-point is to be welcomed and with these last two results of the night it felt like Hebden had taken a couple of half points more than they might have expected ordinarily.

All five of the games from Monday night are provided in the game viewer below. Each has been furnished with some light commentary by the players. The final scorecard for the match looked like this:

Elsewhere in league 1; Brighouse and Belgrave drew at Brighouse and Halifax ‘A’ drew with Todmorden ‘A’ in what appears to have been a very interesting evening’s play. Todmorden once again fielded only four players but escaped with a draw courtesy of Pete Mulleady’s defeat of last season’s star individual, Darwin Ursal. The other two winners from round 1, Huddersfield and Courier ‘A’ played on Wednesday night. Last season Courier succeeded in doubling down on Huddersfield. This time round Huddersfield re-stated their title ambitions with a comfortable 3½ — 1½ win as they welcomed back Leo Keeley to the side. They missed him last season and he celebrated his return by beating Courier’s captain Dave Patrick on board 2. This result left Huddersfield clear at the top as the only team with a 100% record.

Who’s going to stop Huddersfield? With all due respect to Belgrave, Brighouse and Todmorden ‘B’, they probably won’t have another serious test until the 28th of November when they host Todmorden ‘A’. They could be even further clear of the chasing pack by then.

Next week league 2 returns to the spotlight. Stay tuned for more games and match reports then.

One Response to “Todmorden Hit on the Rebound”