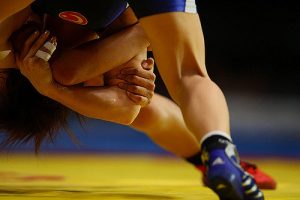 The opening fixture of the season typically sees a wrestling match between sides from the same club. This time in Hebden Bridge, honours were even. (This photo is used under Creative Commons terms and sourced from Tsutomu Takasu’s Flickr photo stream.)

The 2016-17 Calderdale Evening Chess League season has begun! Another exciting and tense season lies ahead with Todmorden ‘A’ defending their League 1 title. Can they manage a ‘three-peat’?

Unfortunately the week before the first round of fixtures news filtered out that another League 1 team had folded right on the eve of battle as Todmorden ‘B’ withdrew. Presumably a lack of players forced this upon them. That leaves League 1 in the most unsatisfactory position of only having seven teams as it was far too late to try and bring one of the relegated teams back up. It’s been depressing to see the league dwindling over the last few years but let’s not dwell on that when there has been a round of fixtures in both divisions to divert us with.
Hebden Bridge ‘A’ and Hebden Bridge ‘B’ postponed their scheduled opening day derby duel by a week so that they could both field 5 regulars. Team Captains Dave Shapland (‘A’ team) and Martin Syrett (‘B’ team) were able to put out their strongest line ups and test their mettle. On paper the ‘A’ team looked favorites for a heavy win. Matthew Parsons has returned to Hebden Bridge to play on top board. This meant that last year’s top board, Andy Bak, moved down to board 2. Andy’s brother Chris, a new recruit, appeared on board 3 and then came Dave Shapland and Pete Leonard on boards 4 and 5.

This also meant that the ‘A’ team were able to ‘loan’ out Nick Sykes for the evening and he appeared on board 2 for the ‘B’ team. On top board was John Allan. Martin Syrett played on board 3 with Andy Leatherbarrow on 4 and Neil Bamford on 5. The ‘A’ team out graded their opponents by 10 points or more on every single board. Surely it would be plain sailing. As it turned out, far from it!
For the first half of the evening all seemed to be progressing as one might have expected although the ‘B’ team were all putting up stiff resistance with the White pieces (a new arrangement for this season as all away players now have White). Then, suddenly, Neil Bamford capitulated with a blunder against Pete Leonard on board 5. He had done extremely well up until that point and even held an advantage but his error pretty much lost on the spot and the ‘A’ team had the lead.

From that point on though, it was all downhill. Chris Bak seemed to get nothing at all from the opening against Martin Syrett. In a French Tarrasch the position looked very sterile after the queens were exchanged early. However, Martin is a tricky customer and he spotted a tactic that Chris missed and soon went three pawns up as well as keeping the initiative. Chris almost managed to save himself in the murk of a rook and pawn ending but Martin had just enough and his technique was up to the task. 1-1.

On board 1 Matthew Parsons had eschewed his usual Caro-Kann and Sniper Defences against John Allan in order to find his way into a Spanish-style position though it was reached via a Philidor’s Defence move order. Once in the middle game Matthew might have expected to slowly out play his opponent but he was full of praise for John’s precise play after the game saying that he was never allowed to fully equalise and ultimately had to accept a draw offer when in a marginally inferior position.

Meanwhile on board 4 Dave Shapland steadily built up a significant advantage in a reversed Sicilian Kan. However, just at the moment he appeared to have the game all wrapped up he overlooked a simple tactic and lost his queen for a knight. He tried for a while to pull off a swindle but Andy is far too experienced a player to allow that to happen and gave up an exchange to simplify and seal the deal. Suddenly the ‘A’ team were 2-1 down with only one board left in play.

It was the board 2 encounter between Nick Sykes and Andy Bak that would decide the outcome of the tie. Andy had played the Schliemann Variation of the Spanish, a line Nick is very familiar with, and the game looked to be accurately played by both sides for much of the game. It was only after the other games had finished that the balance started to tilt a little in Andy’s favour.
He managed to win a pawn and, with a rook, bishop and three pawns against Nick’s rook, knight and two pawns, it seemed that Andy might be able to save his team mates and salvage a drawn match. But the endgame looked very hard, if not impossible to win. At one moment Nick could have pretty much forced a draw or even won the game if Andy had misplayed it. Instead Nick chose to give up his knight for two pawns. Now Andy had a rook, bishop and h-pawn against Nick’s rook and g-pawn. It seemed to be a very clever choice from Nick because Andy’s h-pawn was due to queen on a square of the opposite colour to his bishop and so all Nick needed to do was exchange the rooks in order to secure a famous win for the ‘B’ team.

Sadly, at the end of a stressful and tiring game, Nick came unstuck at the very last when he wandered into a tactic that was both a discovered attack and a skewer. He lost his rook and that was that. The ‘A’ team will breathe a sigh of relief whilst the ‘B’ team let out a sigh of exasperation. They played well enough to win but will be happy enough with a draw. Below is the final scorecard and four of the five games from this match can be found in the game viewer tat the end of this post:

Elsewhere in League 1, the champions sat out the first round of fixtures that was to have seen them take on their ‘B’ team. The other derby match between Halifax ‘B’ and Halifax ‘A’ proved to be rather more straight forward for the favorites as the ‘A’ team smashed the ‘B’s by ½ — 4½! That put Halifax ‘A’ top of the inaugural table as in the third fixture of the round Huddersfield were only able to pip Belgrave ‘A’ 3 — 2. The hard work was done on the bottom two boards where Nigel Hepworth and Steve Westmoreland defeated Mike Barnett and Angel Gonzalez respectively to cancel out Karim Khan’s defeat of Dave Keddie on board 2.

Last Monday night also saw the beginning of League 2 which has just six teams in it again this season. Hebden Bridge ‘C’ started their campaign at home against Belgrave ‘B’ (formerly Courier ‘B’). Hebden’s captain, John Kerrane was able to completely fill his line up with junior club members and they performed creditably with notable draws for Owen Buchan against Dave Colledge on board 1 and Toby Dodd who held on in a difficult rook and pawn ending against John Smith on board 3. A couple of the games from this match can be found in the game viewer at the end of this post. The individual results were:

The second derby match between Halifax teams, this time the ‘C’ and ‘D’ teams ended in similar success for the stronger side as the ‘C’ team won 4 — 1. In the third match Brighouse, who were relegated last season managed to hold a draw with Todmorden ‘C’ despite defaulting two boards! Robert Broadbent on board 1and Paul Whitehouse on board 2 cancelled out the defaults on boards 3 and 5 while Ron Grandage and Tom Webster drew on board 4.