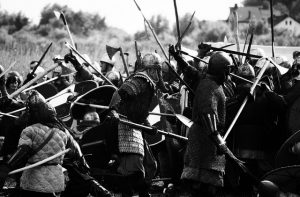 Calderdale Evening League 1 teams convened again last week for the second round of fixtures this season. Sadly the absence of Todmorden ‘B’ means there are only 12 matches being played by each team this season and that means is even less room to recover from a slip up. All the more reason then for Hebden Bridge ‘A’ to bounce back from a disappointing draw with their ‘B’ team colleagues the previous week as they travelled to their age-old rivals Huddersfield. Traditionally, Huddersfield have been something of a nemesis for Hebden Bridge ‘A’ but last season they managed an impressive double over their adversaries and were hoping for more of the same in this fixture.

Hebden lined up with a strong team. Brothers Andy and Chris Bak played on the top two boards, then the Captain, Dave Shapland played on board 3 and Nick Sykes and Martin Syrett played on board 4 and 5. Huddersfield meanwhile were slightly weaker than they might usually be but they still sported a very strong player in the form of Mitchell Burke on board 1. Dave Tooley played on board 2 with Nigel Hepworth, Steve Westmoreland and Stuart Oliver completing their formation. This meant that Hebden had an edge rating-wise on all but the top board. The new league rules meant that the away team all played White and that possibly accentuated Hebden’s position as favorites on paper.

The match began solidly enough for Hebden as Andy Bak agreed a draw relatively swiftly with Mitchell Burke on board 1 to ensure the team got off to a sound start. It was clear that boards 2 and 3, where the difference in ratings was the largest, would be the critical battleground.

Sure enough, Hebden struck there next as Dave Shapland took advantage of a few dubious moves by Nigel Hepworth to initiate a king hunt that ended with Nigel’s king getting checkmated on c4 with the remnants of his forces behind him. Hebden hit the front with that win and they never really looked like relinquishing the lead after that.

Martin Syrett’s winning start to the season continued as he won a pawn against Stuart Oliver on board 5 and then tricked his opponent into a tactical error that cost him the game. Martin admitted afterwards that he’d spotted his idea had been unsound but Stuart missed the refutation.

Nick Sykes and Steve Westmoreland played what was surely the most interesting game of the evening as a super-sharp and highly theoretical Anti-Moscow Variation of the Semi-Slav Defence appeared on the board. It looked very promising for Nick at one point as he opened the f-file for an attack which Stuart seemed ill-prepared to meet. After the game, some human analysis seemed to indicate that Nick had missed an on the spot win, but then, on running the line through Nick’s mobile phone engine it turned out not to be the case due to cunning defensive line which, to his great credit, Steve had spotted at the board. In the end Nick’s initiative petered out and it looked like Steve would survive to win in the endgame only for Nick to find a bishop sacrifice that forced perpetual check. Nick has analysed this game in the viewer at the end of this post. It’s well worth a look.

Finally, with the match result no longer in doubt, Chris Bak added the cherry to the icing on the cake by completing a dominant performance over Dave Tooley. Dave seemed to get an awkward position right out of the opening and Chris increased the pressure steadily until his opponent cracked. Another nice win to complete a 1 — 4 victory for Hebden. The individual results from the match are given below.

Elsewhere, reigning champions, Todmorden ‘A’, having had the bye in round one when they should have faced their club colleagues, made a winning start to their title defence at Belgrave ‘A’. They also continued the dominance with the White piece that they have demonstrated time and again over the last two seasons as they pummeled their hosts ½ — 4½ . It clearly doesn’t matter whether they play White at home or away, they are just incredibly hard to stop when they are playing White. Belgrave’s Dave Colledge was the only one of their players not to lose as he drew with Mike Huett.

The third match of the round was held at the Trades Club between Hebden Bridge ‘B’ and Halifax ‘A’. In a confusing turn of events, Halifax were actually the home team as their venue was not available and so the captains had agreed to play the match on the scheduled date but at Hebden Bridge instead of Halifax. This meant the Hebden, as the ‘away’ team, played White at home. Confused? Me too.

Following on from their tremendous opening results against their ‘A’ team, the ‘B’s could be confident of competing even with one of the strongest sides in the League and last year’s runners up. Halifax seem to be without the services of last year’s top board Darwin Ursal, but they are still very strong with Winston Williams playing on board 1, Bill Somerset on 2 and Richard Porter on board 3. All of these players are rated over 165. Their line-up was completed by the experienced and ever-solid Peter Hughes and team captain Carlos Velosa.

Hebden were somewhat weakened compared to the first match of the season. Against Hebden ‘A’ they had Nick Sykes and Martin Syrett in their line up, but as those two were needed by the ‘A’ team later in the weak, they lined up with John Allan on board 1, Andy Leatherbarrow on board 2, John Kerrane on 3, Neil Bamford on 4 and Terry Sullivan on board 5.

From a rating perspective it should have been a total cake-walk for Halifax but once again Hebden showed their mettle. John Allan drew with Winston Williams in an attritional struggle that lasted until the very end of the evening with both players down to bare kings and queens. Winston appeared to be trying to extract a win on time but John held on for half a point. On board 2 Andy Leatherbarrow surpassed his season opening win over Dave Shapland by beating Bill Somerset. It appeared that Bill was trying to extract something from a completely even position and over reached himself. Andy once again showed he had a ruthless streak by winning in the ending.

Sadly for Hebden the good form didn’t continue down the order as Halifax’s bottom three boards restored the status quo. Richard Porter gratefully accepted a blunder from John Kerrane and while Pete Hughes and Carlos Velosa also steadily out-played their lower-rated opponents. The final score was 3½ — 1½ to the home side (who were playing away!) The match scorecard below should make it clear!

All of this leaves Halifax ‘A’ atop the early league table by virtue of them having won two matches whilst Todmorden ‘A’ have only played, and won, one. Hebden ‘A’ are in second place with 3 points. Halifax ‘B’ and Belgrave ‘A’ languish at the foot of the table but Halifax have also played only one match. These two teams play each other next week while Hebden ‘A’ will have their chance to stake their title credentials as they host Todmorden ‘A’ at the Trades Club and Hebden ‘B’ welcome Huddersfield. It should be an interesting evening.