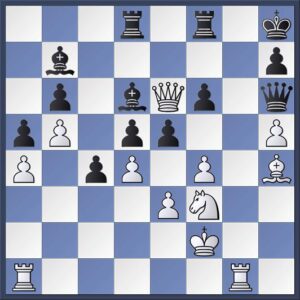 This position appeared in the game between Matthew Parsons and Leo Keely in the second round of the Calderdale 30 on Monday night. It’s White to play. How should he continue? You’ll find the answer and the rest of the game in the viewer at the end of this post.

The Calderdale Evening Chess League launched a brand new competition on Monday this week as 30 players from across the region met at the Belgrave Social Club in Halifax to play three rounds of chess at a time limit of 30 minutes each. This tournament will see ten teams of three players participating in a round robin team format over four evenings from this week through to March next year. League positions will be determined not by match points but by points scored on each and every board and that means every single game has a potential bearing on the outcome with up to three points available in every match.

It was great to see so many chess players all in one place on Monday and almost half of them were representing Hebden Bridge Chess Club as we entered four teams to take part. They joined two teams from Belgrave, two from Huddersfield, one from Halifax and another team of ‘Nomads’ made up of players from various clubs who didn’t have a berth in any of the other teams. Hebden chose to distribute their strength across all four of their teams in order to try and make the whole tournament as competitive as possible. Their fours teams were led on the top boards by Matthew Parsons, Phil Cook, Martyn Hamer and Jamie Heritage whilst their bottom boards were occupied by four players who joined the club either just before or just after the COVID lockdown, Cobus Daneel, Jeremy Butts, Chris Marsden and Sam Giles.

By the end of the evening two of Hebden’s teams had taken an early lead and were well clear of the pack. Here is a round by round breakdown of the scores.

Hebden Bridge A (Matthew Parsons, Dave Shapland and Cobus Daneel) beat the Nomads side (Richard Porter, Vivienne Webster and Angel Gonzalez) by 2½-½. Matthew and Cobus won fairly comfortably but a rusty Dave missed a hanging piece in the middle game and then blundered the exchange in his game but somehow managed to hang on for a draw in the end game with Vivienne’s time running out.

Hebden Bridge B (Phil Cook, Nick Doody and Chris Marsden) beat Halifax (Andrew Whiteley, Barry Wadsworth and John Nicholson) 2 – 1 though they didn’t lose a game as both boards two and three were drawn whilst Phil won on board 1.

But the result of the round was undoubtedly Hebden Bridge D’s (Jamie Heritage, Sam Swain and Sam Giles) pasting of Hebden Bridge C (Martyn Hamer, Paul Gledhill and Jeremy Butts) 3-0 with Jamie’s win over Martyn on board one serving further notice that he is going to be a major force to be reckoned with in Calderdale this season.

Hebden Bridge D continued their perfect form with a 3-0 thrashing of the Nomads in round 2. Just half a point behind them were Hebden Bridge A who also managed to beat Huddersfield B 3-0. Matthew Parson’s beautiful game against Leon Keely on board 1 is given in the game viewer at the end of this post and is well worth taking a look at, while Dave Shapland survived another scare before turning the tables on David Gray and new-comer Cobus Daneel took down the Huddersfield Captain Alec Ward in fine attacking style.

Hebden B beat Belgrave A 2-1 in a tight match with Nick Doody’s win over Robert Clegg on board two proving to be decisive as Phil Cook drew with Dave Patrick and Chris Marsden drew with Chris Edwards on boards 1 and 3 respectively. This put the B team two points behind the D team and one and a half behind the A team after two rounds.

Hebden C bounced back from their first round defeat by the D team to beat Halifax 2-1. Martyn and Paul won their games on boards 1 and 2 against Andrew Whiteley and Barry Wadsworth while Jeremy on board 3 also had much the better of the game against John Nicholson before running out of time in a completely winning position.

In the last of the round 2 matches, Belgrave B lost 1-2 to Huddersfield A.

Hebden Bridge D assured themselves of the top spot in the league after 3 rounds by carrying out their third demolition of the evening, this time against Halifax. This rounded off an extremely impressive evening from all three of their players.

Hebden Bridge A lost a little bit more ground in their chase as they won 2½-½ for the second time in the evening against Belgrave B. This time it was Matthew on board 1 who was impressively held to a draw by Dave Colledge. Meanwhile Dave and Cobus both did what they needed to against Les Johnson and Steve Harrington respectively. Cobus finished the night on 3 out of 3 – another very impressive performance.

Hebden Bridge B lost their final match of the evening 1-2 to Huddersfield A. Phil beat Nick Sykes on board 1 but Nick and Chris both lost their games to Robert Mitchell and Colin Frank respectively.

Hebden Bridge C continued their recovery with a fine 2-1 win over Belgrave A. The hero here was Jeremy who recovered from two painful losses on time to dispatch the experienced Chris Edwards on board 3. This win, along with Phil’s win over Dave Patrick on board 1 was enough to counteract Paul’s loss to Robert Clegg on board 2.

The final match of round 3 saw the evening’s only tied match as Huddersfield B and the Nomads fought themselves to a standstill. Leo Keely beat Richard Porter on the top board but Angel Gonzalez beat Alec Ward on the bottom board whilst the game between David Gray and Vivienne Webster was a draw.

This competition is a welcome addition to the calendar and there was a great atmosphere at the Belgrave Club with so many players all in one place and lots of exciting games being played. Whilst two of the Hebden teams are currently riding high, neither of them have played the strongest teams in the competition yet and so there is plenty of time over the remaining six rounds for the other to haul them in, and, with some missing players due to return for the next night of fixtures, there is every chance that fortunes may change.

For the benefit of those who are uninitiated, the game viewer above contains one of the games played last Monday night. It will automatically scroll through it unless you tell it to stop by clicking on the ‘=’ button below the board. You can navigate forwards and backwards using the arrow buttons beneath the board or click on the moves in the text box on the right.