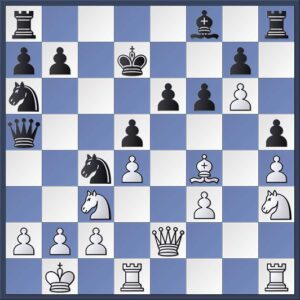 This position arose in Barlow vs. Heritage in the round 4 clash between Hebden Bridge D and Belgrave A. It’s Black to move and, despite his king being in the centre, his pieces are starting to menace the Black king. What’s the best next move for Black. You’ll find the answer in the game viewer at the end of this post.

Monday night saw the fourth and fifth rounds of the Calderdale 30 Rapidplay tournament take place at the Belgrave Club in Halifax. Readers may remember from the previous article on this competition that Hebden Bridge D sat atop the table with a perfect record of nine wins from nine games after the first three rounds with Hebden Bridge A a point behind them on eight.

Proceedings were slightly less frenetic on Monday as just two rounds were scheduled so it was just a matter of organising some last minute logistics to fill a couple of empty team rosters (Hebden Bridge arrived with 11 players and needed a twelfth) and jiggling the board orders to accommodate a couple of loan wolves who had turned up hoping for a game. It was great to see one-time Hebden Bridge player, Darwin Ursal, at the Belgrave Club and he slotted onto board 1 for the Nomads whilst Angel Gonzalez moved from board 3 in that team to join Hebden Bridge D on board 3.

As could be expected, team composition did change between rounds 1-3 and 4-5. Hebden A were unchanged but Hebden B saw Ralph Tatt getting his first taste of competitive chess in Calderdale on board 3 and David Wedge kindly making an emergency last minute substitute for an unwell Nick Doody on board 2. The C team welcomed Andy Leatherbarrow on board 2 and, as mentioned above, Angel Gonzalez joined the D team on board 3.

Here’s how the two rounds progressed:

Hebden Bridge A had double derby trouble on Monday with two tough assignments against first their ‘B’ team and then their ‘C’ team. The first one was a very hard fought affair and in the balance until the very end of the round with board 1 being the last to finish in the room. Cobus Daneel continued his perfect trajectory with a victory over Ralph Tatt but Dave Shapland lost to David Wedge on board 2 meaning that the fate of the match rested on the top board clash between Matthew Parsons for the A team and Phil Cook for the B team. Much like their classical time limit encounter at the start of the season, this one went right to the wire. Matthew claimed a win on time at the end but Phil hadn’t noticed that Matthew’s allowance had also elapsed and, after a brief discussion a draw was amicably agreed and was probably a fair result. So, the match was tied.

This result gave the D team a chance to increase their lead however, up against a strong Belgrave A side, they were unable to take advantage and slipped to a 2-1 defeat as Sam Swain lost to Dave Patrick on board 2 and Angel Gonzalez lost to Karim Khan on board 3. However, on board 1 Jamie Heritage demolished Dave Barlow convincingly with the Black pieces to keep his perfect record in the competition. This game is given in the game viewer at the end of this post with some annotations by Jamie for your entertainment.

Hebden Bridge C meanwhile were engaged in another tight encounter, this time with Huddersfield A. Andy Leatherbarrow lost to Nick Sykes on board 2 but Martyn Hamer and Jeremy Butts beat Gerald Cuaresma and Colin Frank respectively to seal a victory.

Things went from bad to worse for the A team as they were taken apart by their C team colleagues. Dave Shapland lost gain, this time to Andy Leatherbarrow, Matthew Parsons and Martyn Hamer drew on the top board and Cobus even lost his perfect record to his friend Jeremy on board 3. 2.5-0.5 for the C team was a fantastic result and helped to propel them up the standings.

This time the D team were able to take full advantage of the A team’s mis-step as they handed Huddersfield A their second 2-1 defeat to a Hebden side of the evening. This time Colin Frank was able to beat Angel Gonzalez on the bottom board but Sam beat Nick Sykes and Jamie won yet again, this time against Gerald Cuaresma.

The B team also won their match against against Huddersfield B by the same score of 2-1. Phil Cook capped a great evening with a win over Leo Keely and David Wedge beat Alec Ward to see the B team to victory. Ralph had another game with Amin Hossain but ended up on the losing side.

So, although Hebden D extended their lead at the top by a point, there is now a bunch of times gathering behind them and the A team who, despite Monday’s tough results, remain in second place. With plenty of clutch matches to come, including the top two teams facing each other in round 6, and four more rounds still to play, it seems possible that even the teams on 8.5 could catch up if they can string some big wins together.

The honour of being the top scorer in the competition is also still wide open but someone will have to stop Jamie Heritage if they are going to snatch it from him.

For the benefit of those who are uninitiated, the game viewer above contains one of the games played last Monday night. It will automatically scroll through all of the moves unless you tell it to stop by clicking on the ‘=’ button below the board. You can navigate forwards and backwards using the arrow buttons beneath the board or click on the moves in the text box on the right.