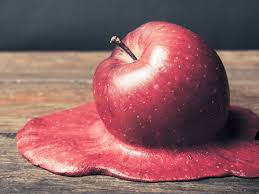 I couldn’t find a picture of an applecart actually being upset so this will have to do! At least it reflects the meltdowns some of the higher rated players had in round 1 of the Calderdale Individual Chess Championships last Monday.

The first round of the Calderdale Individual Chess Championship is typically a relatively turgid affair. The draw for the opening round pits the top half of the draw against the bottom half and, with only one section in the event, you tend to see the kind of grading differences between opponents that tends to lead to a clean sweep for the favorites. Occasionally the odd half point is saved and very occasionally a top dog makes a blunder from which it is impossible to recover. But in recent year’s this has been a rare event. However, it appears that the underdogs in round 1 of this year’s championship had not read the script as we were treated to a fascinating evening full of surprise and upset.

But before we get to the action, lets briefly recite the cast of characters in this drama. 38 players registered to enter which represents a very good turn-out, although immediately 5 of those 38 took a half point bye in round 1. Unfortunately, that left young Martha Leggett without an opponent in round 1. Top seed in the draw was the champion of 2013, 2014 and 2015, Matthew Parsons (Hebden Bridge) who made his return after missing last year’s competition. In round 1 he was drawn to face club colleague Andy Leatherbarrow with Black pieces. Defending champion Greg Eagleton (Huddersfield) was seeded second and found himself playing with the White pieces against Angel Gonzalez (Belgrave).

The top two are both rated well into the 180’s and their opponents on Monday were rated more than 50 points lower than them. The next 4 seeds in the draw are all rated in the 170s. Mitchell Burke (Huddersfield), Phil Cook (Todmorden), Ian Hunter (Belgrave) and John Allan (Hebden Bridge) had a slightly smaller grade advantage on paper but it still looked overwhelming like the top boards would result in a clean sweep for the top seeds.

After this top half dozen we then had Richard Porter (Halifax), Dave Shapland, Pete Leonard, John Lavan and Nick Sykes (all Hebden Bridge), Richard Bedford (Todmorden) and Martin Syrett (Hebden Bridge) all rated between 140 and 169 (but mostly at the lower end of that scale). They too enjoyed grading differentials of between 40 and 50 points over their opponents.

As ever there was an excellent showing from the Hebden Bridge junior club who fielded 8 players all of whom were taking the opportunity to test themselves against more seasoned players from the league and compete for the ’Best Junior’ prize. 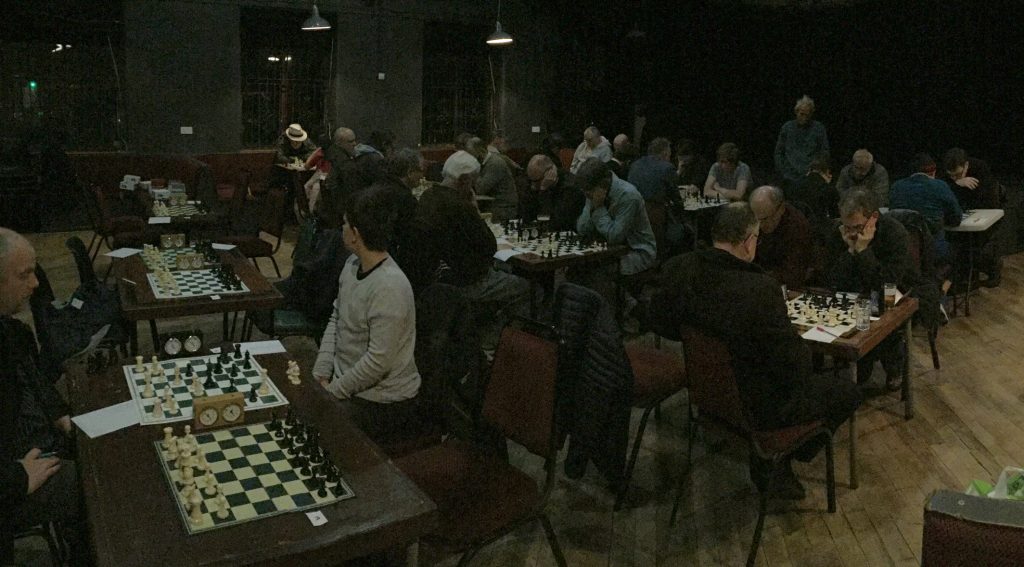 Let battle commence! It was great to see the Trades Club packed for round 1 of the CIC

Now, to the action. Early on in the evening there didn’t appear to be much evidence to suggest any apple carts would be upset. Pretty much the first to win his game was Nick Sykes who quickly dealt with Bill Joyce (Todmorden) on board 11. On board 6 John Allan won smoothly against Adrian Dawson (Belgrave) after dealing effectively with Adrian’s pet opening, the Lowenthal Variation of the Sicilian Defence. Likewise, Ian Hunter defeated Neil Bamford (Hebden Bridge) in similarly prosaic fashion. Both Phil Cook (against Vivienne Webster) and Mitchell Burke (against Robert Sutcliffe) had to work a little bit harder to get the better of their adversaries but they did so in due course.

At the lower end of the draw there were also some quick victories as some of the juniors found themselves with too much to do against more experienced opponents. John Brooke (Belgrave) had finished his game against Julia Hadari (Hebden Bridge) pretty quickly and Scott Gornall (Halifax) also dealt with young Alfie Dermo (Hebden Bridge) in short order. Soon after the youngsters were joined in defeat by Gwillem Hughes (Hebden Bridge) who went down to Martin Syrett and Joel Hadari (Hebden Bridge) who lost to Mike Barnett (Belgrave). Of the junior contingent this just left Luca Curry battling it out with Richard Bedford beyond the half-way stage of the evening. Despite these early set-backs though, the battle for best junior in the tournament looks like it will be well contested.

Beyond the mid-point of the evening the balance of power began to shift towards the underdogs. At first it was only a minor blip as Andy Leatherbarrow (who has been having an outstanding season so far) managed to hold a draw without too many problems against the top seed on board 1. It was perhaps a greater surprise when Angel Gonzalez also held a draw against the reigning champion, mainly because he did so with Black. This was how the bottom half of the draw got off the mark.

By this point of the evening it was becoming clear that some of their number were playing well enough to have very good winning chances. On board 7 Richard Porter seemed to have secured a perfectly good position against Pete Moss (Halifax) but then he over looked an exchange sacrifice that brought about a huge attack for White. There didn’t seem to be an immediate break through, and Richard defended tenaciously, but his position looked abject. Next door on board 8, Dave Shapland was struggling with White against Terry Sullivan. Terry played carefully and accurately (although also slowly) in the opening phase of the game and Dave didn’t manage to get any kind of attack going in a Rubenstein Variation of the French Defence. Finally, Dave took too much of a risk in keeping the queens on the board when Terry offered their exchange and suddenly Black was in the ascendency which led to Terry also winning an exchange and maintaining the initiative to boot.

The next two boards were also looking interesting. Pete Leonard had gained a very pleasant position from the opening against Barry Wadsworth but then started to misplay the position and Barry, never one to decline the opportunity to attack, did just that was hanging on and started to turn the tables. John Lavan was also up against it in his game with Steve Harrington who was going for it with Black and putting his higher rated opponent under serious pressure.

In the end a couple of the stronger players had to rely on the clock to haul themselves to safety. Dave Shapland was in serious trouble but Terry, having played very deliberately earlier in the evening, didn’t seem able to raise the tempo of his game as time control loomed and allowed his clock to run down with six moves still to make. Dave let out a massive sigh of relief!

Steve Harrington’s brave effort also came to nought during the time scramble which, if the score sheet is correct seems to have involved both players over-looking a mate in 1 for White towards the end of the game. In the end, John navigated through the complexities to gain material and Steve also ran out of time. By this point in the evening Richard ‘Beaky’ Bedford had also overcome the spirited resistance of Luca Curry which ensured that the juniors drew a blank in round 1. No doubt they will begin to pick up some points in round 2.

This just left the two major upsets of the evening to play themselves out. First of all Pete Leonard went completely off the rails against Barry Wadsworth. He lost a pawn and then a piece and was in desperate time trouble to boot! In the end he felt compelled to resign soon after the time control as the queens were about to come off leaving Barry with an extra knight and two pawns in the end game.

Pete Moss’s victory came about in rather different style. Having kept his boot metaphorically on Richard Porter’s throat he slowly lost some of his control but then, just as it seemed Richard might somehow salvage something from the game, he blundered a rook and resigned on the spot. A fitting outcome for Pete’s earlier fine play. Richard was the first to congratulate his opponent and as they chatted afterwards it emerged that they had played each other before at primary school 46 years previously!! We didn’t find out who won that game but Pete left no questions about this one.

Below are the full results of round 1 with a selection of 13 of the games in the viewer at the end of the article. You can also tell us who you think will win the tournament after this slightly surprising set of round 1 results in the poll below. (The poll will close on Wednesday 23 November.)

Round 2 takes place on Monday 5th of December. Will some of the successful underdogs be able to continue showing their fine form?