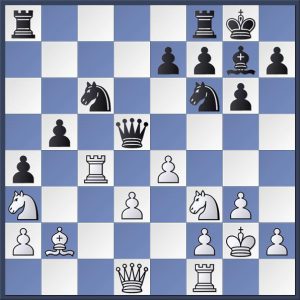 Cook vs Leonard. Black to move. How would you proceed here? See how the game continued and what the best continuation was in the game viewer at the end of this post.

Apologies for the recent radio silence on this website. Your editor has been in the throes of leaving one job and starting another and therefore there has been even less time than usual to keep on top of the website. Hopefully we can catch up quickly so expect a few posts in the coming weeks to get our league reports back up to date. Before all of that though…

The fifth and final round of the 2017-18 Calderdale Individual Championship took place at the Trades Club just over a month ago on Monday 5th of March. Given the adverse meteorological impact of the ‘Beast from the East’ at the end of the previous week and weekend, arbiter John Kerrane was probably very relieved that transport conditions had improved enough to ensure players could reach the venue.

The final round usually promises some tense and exciting chess as the prizes are decided both at the head of the tournament and, also for grading prizes and the junior prize. On this occasion there was certainly tension and a great deal of fighting chess. However, despite this, the top three boards all ended in draws which leant the denouement of this year’s championship something of an anti-climactic feel.

Let’s start with the title decider. Defending champion Phil Cook (Golden Lion) was the only player on a perfect score at the beginning of the evening. He was drawn to play White against Pete Leonard (Hebden Bridge) who was on 3½ and needed to win to overhaul the leader. Last season Matthew Parsons had managed to do just that but as he was a point behind Phil he was unable to snatch the title from his grasp.

The other player in with a shot of overtaking Cook was Mike Barnett (Belgrave) who was also on 3½. He had the White pieces against Richard Porter (Halifax) who was on 3 points. Matthew Parsons (Hebden Bridge) was the other player on 3 but he had contracted the same flu bug that had damaged the ranks in rounds 3 and 4 and was therefore absent.

Both the top two boards featured hard fought battles, but both ended in draws. Phil and Pete’s game developed in an interesting fashion as Phil deployed an unusual line of the Reti Opening advancing his b and c pawns in the first three moves. Pete responded well by taking direct action against the advanced queen’s side pawns and then striking in the centre as well before Phil could get developed. This allowed Pete to equalise comfortably, but it also led to some simplifications that suited Phil’s objective of drawing to retain his title.

Pete missed a brief window of opportunity to snatch a pawn on move 16 (see the diagram above) and instead it was Phil who bagged a pawn. Pete seemed to have dangerous threats in exchange for the material, but Phil had it all under control and simplified the position to the point where he had an extra passed a-pawn which looked extremely dangerous. Pete just had enough counter play to regain the pawn and hold the position but no more and when Phil allowed Pete to win back the pawn to force further simplifications the players agreed to peace with Phil retaining his title. This draw was also enough to secure Pete the prize for second place.

The board 2 encounter was a completely different in character in all respects except that the opening set up selected by Mike Barnett was similar to the one chosen by Phil (Mike played c4 on move two and fianchettoed his king’s bishop). In this game the players chopped wood relentlessly until they reached an endgame where they both had isolated d-pawns and Mike had a bishop and knight versus Richard’s bishop pair.

It was only now that the game really began. Richard seized the initiative and won first one and then a second pawn. Around time control though he also missed a couple of clear cut winning chances and instead Mike defended tenaciously however and found a tricky resource that enabled him to swap a pair of bishops and advance his c-pawn to the seventh rank tying down Richard’s remaining bishop down in the process. However, Mike then had to give up his knight to remove one of Richard’s passed pawns and a foot race between Richard’s passed a-pawn and Mike’s king and f-pawn ensued with the two pawns queening on successive moves. It still looked like Black might win but in fact it wasn’t possible for Richard to make progress with just a queen and bishop against the queen and, at the very end of the evening the two men signed a truce. This was a fascinating endgame and some notes on it have been provided in the game viewer at the end of this article.

Mike has certainly had his money’s worth in this year’s competition as he’s been involved in the last game to finish in at least three of the five rounds! He finished on 4/5 (level on points with Pete) and won a grading prize. An excellent result for Mike. 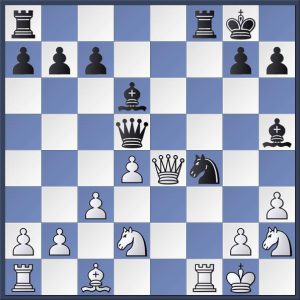 Gledhill vs Shapland. Black to move. Find the killer blow that White had overlooked. Answer in the game viewer at the end of this post.

Richard finished on 3½ where he was joined by Dave Shapland (Golden Lion) and Martin Syrett (Hebden Bridge). Dave took full advantage of an opening error by Paul Gledhill to win his game with a nice tactic (see the diagram on the right) while Martin took a while longer to overcome the spirited resistance of Vivienne Webster.

Sandwiched in between the top two boards and these two were Nick Sykes and John Allan. They also played out a draw where Nick also played 1.Nf3 and 2.c4 but the game later transposed into a Maroczy Bind type position. John knew how to equalise and worked to towards engineering the key pawn break of b5 on move 19. After this the game petered out and the players agreed a draw on move 24.

On board 6, Geoff Ainsley and Steve Harrington (Belgrave), with nothing much to play for acquiesced to a three-fold repetition as early as move 15. But then on board 7 there came a critical encounter between two juniors, Zora Sandhu and Toby Dodd (both Hebden Bridge). Toby needed to beat his young opponent to catch him on 2½ and beat him he did, but only after a feisty struggle ending only after Zora overlooked a sneaky discovered check that cost him his queen. This result enabled Toby to snatch the junior prize from Zora but there was a consolation in the form of a grading prize for the youngster.

Most of the games from the final round are featured in the game viewer at the end of this post. But first here are the final standing and prize winners.