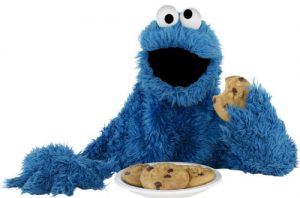 Any excuse for a silly headline and lead image! Phil Cook is, once again, the only player with a perfect score after 4 rounds in this years Calderdale Individual Championship.

Round 4 of the 2017-18 Calderdale Individual Chess Championship took place at the Trades Club in Hebden Bridge on Monday the 5th of February. The competition has reached the sharp end of proceedings and the leaders at the top of the standings took each other on to decide who would remain in contention when the final round takes place in two week’s time. But before we dive into round 4, let’s first quickly re-cap what happened in round 3 as we didn’t report on that at the beginning of January.

This round was substantially affected by the burgeoning cold and flu epidemic as no fewer than five players were forced to take half point byes due to ill health or being on vacation. That meant that, although there were four players on 2 points at the end of round 2, only two were present to contest round 3 as Pete Leonard (Hebden Bridge) was unwell and Dave Shapland (Golden Lion) was on holiday.

This meant that reigning champion Phil Cook (Golden Lion) and Richard Porter (Halifax) were flung together. They’d met in the league earlier in the season and Cook had prevailed. He managed to repeat the feat after successfully navigating a wild and highly unusual opening phase of the game where both players appeared to be ignoring the orthodox principles of chess at times. The champion was on 3 points alone. The question was now, how many of those on 1½ could keep pace with him to stay in touch.

There were a couple of surprises in round 3, notably on board 2 where Martin Syrett (Hebden Bridge) profited from a tactical oversight by his club colleague John Allan late on in an interesting and unbalanced endgame. John seemed to be better for much of the game but suddenly fell into a mating net and Martin pounced to reach 2½.

On board 4 too there was a rating upset as Geoff Ainsley held Nick Sykes (Hebden Bridge) to a draw in a game that looked very much like Geoff could have won if he’d carried on playing. Nick annotates the game in the viewer at the end of this post.

But the story of the night (almost) unfolded on board 5 where there was almost an upset of colossal proportions. Top seed Matthew Parsons (Hebden Bridge) had an objectively lost position at one point in his game against Steve Harrington (Belgrave). Matthew had rating advantage of over 70 points so a defeat would have been cataclysmic. However, he showed both his character and experience by knuckling down and forcing his opponent to continue to find the best moves and plans to seal the deal. Little by little Steve’s advantage subsided until, finally, he made a more significant mistake and suddenly the game was in the balance again. Matthew was not going to give Steve another chance as he converted to keep his slim hopes of re-capturing the title he last won in 2014-15 alive.

The only other players to reach 2½ were Mike Barnett (Belgrave) who defeated Jon-Paul Ellis (Hebden Bridge) in clinical fashion despite having to navigate some seriously murky waters and Paul Gledhill (Hebden Bridge) who continued a recent run of good form to beat Marc Turu (Golden Lion).

Of the eight juniors competing in the round only Zora Sandhu (against Juliet Hadari) and Fred Bortoletto (against Joel Hadari) were able to win their games.

Eight of the twelve games in round 3 can be found in the game viewer at the end of this post. 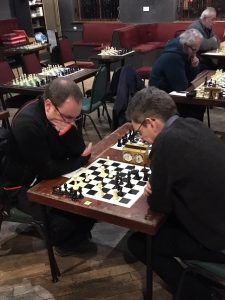 Just as they did last year, Dave Shapland and Phil Cook faced each other in Round 4 of the Calderdale Individual Championship. The result of the game was the same as last season too! [Photo: Matthew Parsons]

On top board Phil Cook was now the only remaining player on 3 out of 3 when the night started and he was pitted against the highest rated of the players on 2½. This turned out to be the same opponent he’d beaten in round 4 of last year’s competition, Dave Shapland, also of Golden Lion Who’d taken a half point bye in round 3.

This game was keenly contested and, although Dave made a mistake early on which gifted his opponent a pawn, he did get some active play in compensation as was able to rustle up a dangerous looking attack. However, Phil defended calmly in time trouble, saw off the attack, consolidated his position and was then able to simplify into an end game which was easily won for him. It was déjà vu for both players as Dave subsided to defeat once more but Phil marched on to 4 out of 4 just as he did last season.

Unlike last year however, when no one else made it to within a point of Phil, this time two players managed to make it to 3½ out of 4. Pete Leonard (Hebden Bridge) beat his club colleague Martin Syrett. He too won a pawn early in the game but in this instance, Martin had no compensation and Pete converted smoothly.

Meanwhile on board three, Mike Barnett defeated Paul Gledhill with Black in the last game of the night to finish. Paul put up spirited resistance, but Mike was too good for him in the end. Pete and Mike are now the only players who have any chance of overhauling Phil and one of them will face him in the final round needing to win to steal the crown from him.

On board 4 Matthew Parsons had a much easier ride than he had in round 3 and cruised to victory with White against Geoff Ainsley. He’s paid the price for defaulting in round 2 as he’s a full point behind the leader with no chance of winning the title back this year. 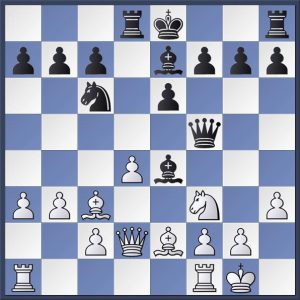 Position from Porter vs. Gonzalez after 14.b3 Qf5. How would you proceed with White here? See what actually happened in the game viewer at the end of this post.

Richard Porter was again involved in one of the most interesting games of the round following on from the extraordinary sequence of moves that featured in the opening phase of his game with Phil in the round 3. This time he found a very unusual tactical idea to lay a trap for Angel Gonzalez. Richard’s concept wasn’t flawless, but Angel didn’t play as accurately as he needed to, and he finally lost a piece for a pawn. Normally this would have resulted in an easy win for Richard, but he found his rook to be very passive in the ending whilst Angel’s was completely free to roam at will. Richard had to play very deliberately to finally liberate his game and carve out a hard-earned victory.

Further down the board order Zora Sandhu put one hand on the junior prize by defeating Luca Curry to move onto 2½ out of 4. Zora is one of no fewer than seven players on that score and will almost certainly be challenged with an opponent of much greater strength in the final round. However, the only other two juniors with any chance of catching up are Joel Hadari and Toby Dodd. One of them must win and home that Zora loses in order to draw level.

Below are a list of all the results from round 4 and the game viewer below that contains a number of games from the round.

The leading scorers after 4 rounds are: