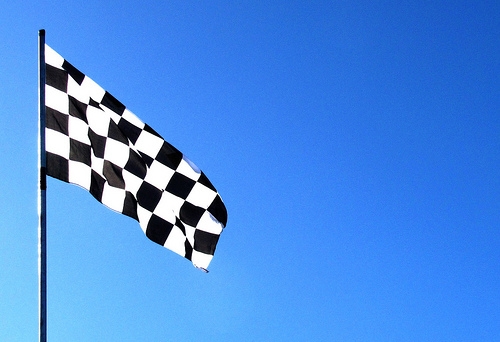 The last lap of the season was full of apt scorelines and a fair few twists and turns although all the destiny’s of all the Hebden Bridge teams had already been decided. This image is used under Creative Commons licence terms and sourced from tharrin’s Flickr photstream

Over the course of the last fortnight the 2012-13 Calderdale Evening Chess League has been drawing to a close. As we’ve already covered here in previous posts the destination of the championship trophies was already decided before the last rounds were played and this meant that there were only a few unfinished stories to tell.

In league 1 Hebden Bridge ‘A’ sealed the title in their penultimate round win over Courier ‘A’, Todmorden ‘B’ were confirmed relegated in the same round and that just left the question of who would be relegated to league 2 with them. Belgrave and Brighouse were meeting each other in the critical encounter to decide this. The equation was simple. Brighouse needed only a draw to stay up, Belgrave had to win. In the end it was Brighouse who survived by the skin of their teeth as they drew with their opponents to condemn Belgrave to the drop. Paul Whitehouse’s win on bottom board against Les Johnson was the decisive result.

Elsewhere in League 1 some familiar patterns were emerging. Todmorden ‘A’ finished the season at home to Halifax in a match that would decide who would finish in third position in the league. Todmorden are pretty dangerous at home when they have their strongest squad available and so it proved on this occasion as the their top two boards (Martin Hamer and Peter Mulleady) drew with Halifax’s terrible twosome (Ursal and Somerset) while the lower boards picked off their weaker opponents in an efficient fashion. Andrew Clarkson beat Carlos Velosa, Rob Tokeley beat Scott Gornall and Chris Edwards beat Adrain Dawson to complete a comprehensive 4 — 1 score line. This result secured Todmorden in third and Halifax in fourth.

At the same venues the relegation battle mentioned above Courier ‘A’ were taking on second placed Huddersfield. Aside from a horrendous run of four consecutive matches across the middle of the season when they lost three and drew one match Huddersfield have been very impressive and they underlined their position with a hard fought 2 — 3 victory against a Courier side that have probably underperformed a little bit this season and have been supplanted in the top half of the table by Halifax.

This just left the dead rubber between champions, Hebden ‘A’, and the already relegated bottom side Todmorden ‘B’. The match was played at the Trades Club and Hebden may have hoped to put on a bit of an exhibition to celebrate their title retention. Of course in the end it turned out to be a hard fought struggle ending in yet another 3 — 2 win for the hosts. Todmorden bought a strong side to the match and, unusually for this season, they actually outscored Hebden on the lower boards only to lose on both of the top two. Matthew Parsons ground down Alastair Wright and Pete Leonard defeated Andy Jacques to secure the victory. Further down the order Nick Sykes gained a creditable draw on board 3 against Neil Suttie, Andy Leatherbarrow suffered a rare defeat at the hands of David Innes on board 4 and on the bottom board Dave Shapland tortured Dave Milton right up until the end of the night but couldn’t convert his space advantage into the full point. The final match score card was:

There will be time enough over the summer to dissect both team and individual performances but for the moment let’s just mention that Halifax’s Darwin Ursal was, once again the league 1 Most Valuable Player (MVP) with a score of 11½/14. He just pipped his partner in crime, Bill Somerset by a single point into second.

… and so to league 2. Hebden Bridge ‘B’ secured their title and promotion some time ago and have run riot through the division dropping only two draws to their ‘D’ team colleagues when they had significantly weakened lines ups. They also finished their season at home against the division’s bottom team which coincidently happened to be Todmorden ‘D’. In the reverse fixture before Christmas this match had been men against boys as Hebden handed out a whitewash. This time Todmorden’s cause was hardly assisted by two defaulted boards as they were once again overrun in short order. The match card was:

Hebden Bridge ‘D’s season ended in a dispiriting fashion when Danny Crampton was unable to raise a team to travel Halifax ‘B’ and was thus forced to default all boards. The loss of Craig and Kyle Sharpe halfway through this season has made life very difficult for Danny and consequently the side has performed well below the promising standards they showed earlier in the season.

Hebden Bridge ‘C’ also finished their season at home as they took on Courier ‘B’. It’s been a topsy-turvy year for John Kerrane’s side. They’ve had some great results and some poor ones and this one bordered on farcical.

“A home win looked likely until, three pieces ahead, James Todd on board 5 took his eye off the clock, and lost the game by not making the time control. The result was that the visitors were genuinely surprised to find that they had won by a score of 2 — 3.”
The individual results were:

The final league standings underline the total dominance of Hebden ‘B’ as they topped the table by 6 points! The big question from the final round of fixtures was who would join them in division 1 next season. It was between Halifax ‘B’ and Todmorden ‘C’. Halifax, as I’ve already mentioned, were beneficiaries of Hebden ‘D’s all board default and that meant that Todmorden had to get a result at home against the Halifax ‘C’ team to secure their promotion. They almost blew it as Barry Wadsworth and Brian Donkersley beat Dave Milton and Paul Logan on boards 1 and 2 respectively to make life very uncomfortable for their hosts. Fortunately, Tom Webster and Bob Pratt won their games for Tod on 3 and 4 and board 5 was drawn. All this meant that Tod ‘C’ (by just a single point from Halifax) swap leagues with Tod ‘B’ next season.

Tom Webster’s win also meant that he secured the MVP prize for league 2 as he pipped Hebden Bridge ‘B’s Dave Sugden and Martin Syrett by half a point with an excellent personal score of 12½/14. Congratulations to Tom whose grade is surely going to shoot up next season.

There are a number of games from the final round of fixtures in the game viewer below. Next week we’ll be posting news of the clubs summer programme and a reminder about the Club Lightning Tournament which takes place at the Belgrave Club again this year on Monday the 13th of May.