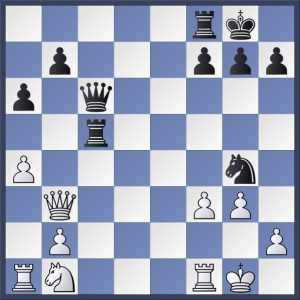 It’s Black to play in this position from Ursal vs. Leatherbarrow. What would you play here? Find out what Andy did in the game viewer below.

This is the third part of the series in which we’ll be featuring the final five games that made it onto my long list. After having had five games from 2014 in our last post, this time the games span out over a longer time frame from 2016 to 2018.

I also want to mention that I’m using a different game viewer in this post. Several readers had been in contact with me to say that they had not always been able to see the Chess Tempo game viewer that I had been using. I’m not sure what was causing the problem as it wasn’t a universal one, but that game viewer was no longer being updated or supported so I guess it was going to break down at some point anyway. The ‘new’ viewer is in fact one that I was using quite some time ago. I’ve tinkered around with the display to try and optimize it. I hope it works for everyone.

Please note that, when more than one game is included in the viewer, you need to click on the bar above the board to reveal a drop-down list and select the game you want to view. Otherwise, the viewer is set to automatically play through the games in turn.

Right! On with the show.

Many readers will have happy memories of our fund raising simul for flood relief with GM Danny Gormally back in 2016. I know I do – primarily because I beat him of course! It was a tough day at the office for the GM as he ended up losing a small handful of games against what he acknowledged was a pretty strong field of club players.

I could have featured several games from this event. All of Danny’s defeats could have qualified as ‘memorable giant-killings’ despite the fact that they were simul games. However, in the end I decided that I should feature the game that he picked out as the ‘best game’ of the simul.

John Morgan acquitted himself most nobly in this one. For a start, he had the courage of his conviction to play his favorite St George’s Defence (1…b5) against the GM. Secondly, he was quick witted enough to spot when Danny’s aggressive play tipped into over-extension and he punished him effectively. In fact, after John had played his 14th move Danny was strategically lost already.

The question then became whether John could be accurate enough to finish the GM off. Unfortunately, he missed a couple of opportunities to finish his illustrious opponent off and Danny slowly clawed his way back into the game. By move 25 he had managed to equalise. John missed one last rather difficult and very beautiful saving chance and goes down swinging. A cracking game of heroic failure fully worthy of it’s space in our list.

The younger of the two Bak brothers has played fewer games for Hebden Bridge than Andy and his style of play is rather different. Chris admits that he prefers slow burning positional squeezes rather than the percussive tactical play and attacking flair that is the hallmark of Andy’s style.

This game is a good example. Phil Cook is not an easy man to beat, especially with the White pieces. In fact, I can only think of one other occasion that this happened and that was in the final round of the Calderdale Individual Championship 2016-17 against Matthew Parsons, and Phil already had the title in the bag by that point. There must be others, but I haven’t witnessed them.

In this game a curious position arises from an English opening in which the White king ends up on d1 and Black castles long behind a shattered pawn structure and with White controlling the b-file. In the middle game, Phil finds a creative way to double his rooks on the open d-file but Chris strikes back in the centre.

I think time pressure had an impact on the quality of the play in this game from as early as move 20 and both players commit some errors. In particular, on the last move before time control and under extreme pressure, there is a case of double blindness as both men miss a straight-forward tactic that would have sealed the game for Black. Instead they bound on into an intricate and interesting rook, piece and pawns ending in which Chris slowly out plays his opponent and runs the gauntlet of a second time scramble to secure a very nice victory.

When Darwin Ursal first started playing for Hebden Bridge in 2010-11 I gave him a nickname: ‘Draw-Win’ Ursal. That was simply because he never lost and usually won. So, it’s fair to say that finding a Calderdale game in which he was on the losing side is like finding a hen’s tooth! Here then is a hen’s tooth extracted with great effort by Andy Leatherbarrow.

The key moment of the battle comes on move 20 when Andy digs deep and plays an instinctive piece sacrifice to get Darwin’s king out in the open. The position is very complicated, and Andy couldn’t possibly have calculated everything, but his bravery and gut feel are rewarded as he gets a huge attack on the king with his queen and rook whilst Darwin’s pieces are largely by standers.

Andy can’t find the killing blow immediately but patiently probes and pushes the White king around until he can find something concrete. Darwin’s defensive task proves impossible and he finally caves in. A fascinating sacrifice which is well worth of further study and exploration and is excellent calculation practice!

We’ve just seen Phil Cook losing a game. It wouldn’t be at all fair to omit an example of the three time and reigning Calderdale Champion’s work. With that competition now defunct, he may end up keeping the trophy and the title forever!

This game is from the Calderdale League and I think it is quite typical of Phil’s style and qualities. Of course we expect to see his trade mark English Opening but Richard’s choice of response (to play d5 and d4 quite quickly, provokes Phil into playing 3.b4!? and this induces Richard to gambit the d-pawn. From there on in Phil plays deceptively simple and sensible chess to increase his control in the centre, open the b-file, improve the position of his pieces and limit Black’s counter play.

By move 30, White’s position is a picture of harmony whilst Black’s is a sad tangled mess. Richard hit’s out in desperation, trying to complicate proceedings but he is in no position to do so and Phil ends up with four extra pawns and a positional bind.

This one is a bit of a crush, but it’s a model in how to exploit eccentric opening play.

Sometimes a game stands out because of one unusual feature or motif. This game is a case in point. How many games have you seen when one player’s king could justifiably be dubbed ‘Man of the Match’? In his notes to this one Andrew Clarkson quite justifiably awards his king the MVP prize and when you take a look at this game, you’ll see why.

The game doesn’t start out in a way that would suggest it would become so remarkable. Dave chooses an unusual, but perfectly playable variation of the Pirc Defence to test Andrew with. Both players develop sensibly and then a crisis comes in the centre of the board as Andrew breaks thematically with 12…c5 and Dave responds in kind 13.e5 and a mass simplification occurs.

If this doesn’t sound promising so far then the endgame really makes up for it. Both players have six pawns and two rooks but Dave has a bishop against Andrew’s knight but he also has doubled and isolated c-pawns and this proves to be the decisive factor in the outcome. Dave forces off another pair of rooks thinking that he can at least hold the position. It’s at this point that Andrew executes a remarkable winning plan as he marches his king across the open board from g8 to collect one of Dave’s loose c-pawns before turning tail and racing back to g7.

In the final act, Andrew manages to exchange the final pair of rooks to enter a knight versus bishop ending in which he has an extra pawn. He then frog-marches his king all the way back to pick up Dave’s pawn on a2 in order to win the game. Of course, there are some improvements in play that both sides could have made here but this is a fairly unusual endgame to be sure.

In my final post of this series tomorrow I’ll be launching a poll for readers to choose their favorite game from a shortlist of 5 games selected by me.