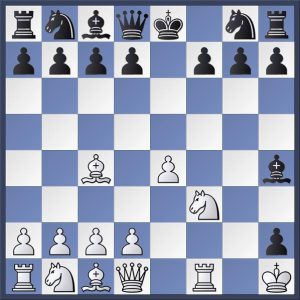 Maybe the craziest position of the decade? This is from Syrett vs. Webster. White just played 7.Kh1. Find out how this happened and what came next in the game viewer at the end of this post.

Today’s post covers five more games from the archive that made my ‘long list’ for Hebden Bridge’s ‘Game of the Decade’. Interestingly, all five of today’s games were played in 2014. It seems that this was a vintage year for interesting and exciting chess games in the Calder valley. Was it something in the water I wonder? Who knows?
As with Friday’s post, I’m going to give a short description of each game and why I selected it plus, at the end of the post, all the games are published with some notes.

The 17th of February, 2014 should be memorialised in our collective psyches in the same way that the dates of some of England’s most famous battlefield triumphs are memorialised. Why? Well, the date marks what amounts to the most improbable, unlikely and surprising match result ever in the Calderdale League. That’s not hyperbole. The occasion in question was our Hebden Bridge ‘D’ junior team, without a win to their names approaching the end of the season and rooted to the foot of the table, hosting Belgrave ‘B’ who were top of Division 2 and undefeated. No one expected anything other than a rout for the hugely out-gunned home side and yet the juniors triumphed 3 – 2.

This game from board 2 was my pick of three startling wins by our juniors but I should also mention that Dan Crampton beat Gordon Farrar and Dylan Leggett defeated Angel Gonzalez (both excellent wins) in a blood bath where all five games were decisive. I felt compelled to pick one game from this match and I chose this one primarily because of the dramatic turning of the tables at the end. Karl Dickinson was being comprehensively dismantled by Malcolm Corbett whose main problem appeared to be choosing between the different ways to win the game. In the end the one he chose back fired horribly and Karl found the narrow path he needed to tread to force victory. The only shame is that he missed a very beautiful checkmate right at the end which would have crowned his startling achievement. But this game is certainly the most memorable giant-killing of the past decade.

Let’s get this one out of the way as it’s one of mine! Generous colleagues suggested a few of my own games as candidates but not this one. However, when I weighed them all up, I felt this game was the most special and I remember a lot of the kibitzers after the game remarking on how interesting it was. It’s hard to disagree, this is a most unusual game. It should also be said that Andy played a full part it too, competing with creativity and bravery in a game that was ultimately a bit of a dead rubber for both of us as neither of us could challenge for the Championship in the final round.

The game develops out of a Scandinavian Defence and, in a moment of improvisation, I decided to play on both sides of the board rather than in the centre. This makes for a very unusual and chaotic position but somehow, I always felt that I managed to maintain the initiative. This is one of those games with a dizzying complex of variations some of which the players considered and calculated and others that were unearthed with the help of an engine afterwards. I’m relatively satisfied however, that both of us played the game well enough for it to be on this list and as your archivist, I have to permitted one indulgence surely?!

Another game made memorable by its total mayhem. I seem to recall that I was playing in another match at the Trades Club on the night in question, took an early walk to see what was happening on the other boards and nearly fell over with surprise when I saw this one. By the time Martin had played his seventh move he was missing his f, g and h-pawns and Tom had a pawn on h2 that the White king was taking shelter behind. On move 7 mark you!

That this position is reasonably well known in King’s Gambit theory is bye the bye, there aren’t many players that would agree to reach this position in a serious game. If White has the audacity to play the King’s Gambit, generally Black players will try to spoil his fun in some way by declining it or playing the Falkbeer Counter Gambit. Here though we have a full-blooded King’s Gambit Accepted – a rare jewel that both Martin and Tom immerse themselves in to the full.

To be fair, this game is rather one-sided after Tom makes a couple of mistakes early on. It gallops on in a similar vein with some striking moments along the way before Martin finally finds a route through to Tom’s king. This game can be torn to shreds under the scrutiny of an engine, but that’s rather missing the point. It’s pure entertainment from start to finish.

I was keen to have a feisty draw on the long list, and this is one of the feistiest I can remember. It’s more chaos and complexity but is different from the previous two games in that this one is rather more theoretical in nature as the platform for it is one of the most heavily analysed branches of the Najdorf Sicilian, the infamous Poisoned Pawn variation.

The game develops much as you’d expect it to with Black collecting White’s b2 pawn at the cost of giving his opponent a serious development advantage. With his queen getting kicked around, Greg fights to find ways to simplify the position whilst Andy strives to keep pieces on and open lines towards the Black king.

I remember both players got into serious time trouble in this game, which is no surprise when you consider the level of complexity they were dealing with. However, neither man backs down and both play some creative and resourceful chess. Later in the game Greg plays an inaccuracy that hands Andy the advantage but he in turn fails to find the most effective way to prosecute his attack and the game hurtles on.

At the end, realizing that both their flags had fallen and not knowing who’s had dropped first, the exhausted fighters agreed to a draw. A game full of fight and commitment.

‘And now’, as Monty Python famously said, ‘for something completely different! Don’t get me wrong, there is plenty of excitement to enjoy here, but this is a silky smooth and predominantly positional win from Nick where all the tactics fall into place for him behind his single-minded strategy. It’s a classic win against Robert’s King’s Indian Defence with White attacking on the queen’s side and trying to break through before Black can get to his king.

The fact that the result never seems to be in doubt should not disguise the fact that Robert played quite well himself in this game, it’s just that Nick played pretty much perfectly to best him. At the end White is just a pawn up but the position is completely winning.

A really fine effort from both players which bestows even more kudos on the winner.