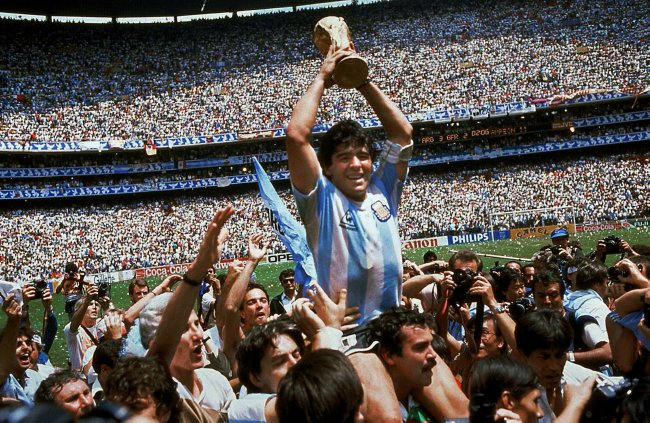 Halifax Captain Carlos Velosa was at least as happy as Diego Maradona was in 1986 as his team lifted the title last Monday. Did his team carry him round the car park at Belgrave though?

By now most if not all readers will be aware that Halifax ‘A’ won their first Calderdale Evening Chess League 1 title for twenty eight years last Monday night. Belgrave won the League 2 title to be promoted as champions back to the top flight. They will be joined by Halifax ‘B’ who finished in second place. Halifax’s Darwin “Draw-Win” Ursal finished the season as the best individual in League 1 with a score of 12/14 (or 10/12 if you discount a couple of defaults). Another Halifax player, Scott Gornall, took the League 2 individual player of the year plaudits with 10/11 (with just one of these points coming from a default).

It’s been a wonderful year for Halifax Chess Club and all their members should be given great credit for their commitment and passion for the game especially when you consider that just two seasons ago they had no teams in the top flight. Naturally taking the League 1 title is a really big deal for Halifax. I was 11 years old when they last won it! Let’s take a moment to reflect on what the world was like  in 1986. Here are some of the big events of that year:

Quite a memorable year I’m sure you’ll agree! 1986 feels like a lifetime ago. Poigniantly I noticed recently that 1986 really was a life time ago for Vugar Gashimov. The Azerbaijani Grand Master was born in 1986 and died tragically from a brain tumour in January this year. The current tournament in Shamkir is being held as a memorial to him.

Now, back to the action in Calderdale. The final round of the season began with three teams still in contention for the title in League 1. Halifax ‘A’ were top on board count but they had to travel to Courier ‘A’, who were on the same match points as them, for the last round. Halifax knew they needed to win to be sure of the title because, if they drew, Huddersfield could over take them by winning away at Todmorden ‘A’. Courier also knew that they had to win the match so a truly bloodthirsty night of chess was in the offing.

The first result of the night came from Todmorden where the home side’s Andrew Clarkson won a miniature against Huddersfield’s Dave Keddie on board 3. This already left Huddersfield with a mountain to climb. Meanwhile at Belgrave Social Club the only early result was a surprisingly short draw on board 4 between the Captains Dave Patrick and Carlos Velosa.

By the middle of the evening it became apparent that Huddersfield were slipping out of contention. In fairness to them Todmorden ‘A’ have put together an incredible record at home this season having lost only one game from 35 played with the White pieces! By the end of the second hour’s play the home side had secured a draw on board 4 between Alastair Wright and Imre Zelei and they then put the title beyond the visitor’s grasp when  Pete Mulleady beat Mitchell Burke on board 2. Huddersfield now had to win both the remaining boards just to tie the match.

Back at Halifax the match situation remained tense for much longer. By 10 o’clock only a second draw in board 2 encounter between Tony Slinger and Winston Williams had been added to the early result and the match as in the balance. Courier’s Robert Clegg seemed to have the advantage over Sam Scurfield but failed to find the best way to press it home and then blundered to give Halifax the advantage on the bottom board. The top board match up between Phil Watson and Darwin Ursal was destined to run and run with the outcome being anyone’s guess. It was only when Bill Somerset beat John Morgan on board 3 that Halifax really started to believe they could do it.

Shortly afterwards Halifax did clinch the title as Sam mopped up against Robert to make the score 1-3. The last game to finish was significant only because it robbed Darwin of his unbeaten record in Calderdale this season. Phil managed to beat him in a time-scramble at the end of the evening’s play.

Zeintot could have played a part in the outcome at Todmorden too as both Rob Tokeley and Dave Tooley ran very close to the wire. The Todmorden man had to make his last nine moves before the time control in a minute but he just made it and the players went into an opposite coloured bishops ending which looked drawn. They squeezed every last drop out of the position but finally Dave offered Rob a draw and it was accepted. Todmorden had won the match and all that remained was for Leo Keeley to do all in his power to take down Martyn Hamer and give Huddersfield a consolation victory. Sadly for them, even that didn’t happen and another draw meant that Todmorden took the match 3½-1½.

The final league table therefore shows Halifax ‘A’ on top with 21 points. Courier ‘A’ were second on 19 points just one and a half boards ahead of Huddersfield who finished third also on 19 points. Todmorden ‘A’ were fourth on 18 points and will be left wondering what might have been had they not defaulted in the penultimate fixture at Halifax. Had they played and won that match they’d have won the league themselves by a single point!

Below Todmorden the 2012-13 champions Hebden Bridge ‘A’ finished the season off in fifth place but ended the season in fine style by thrashing Todmorden ‘B’ at home 4½-½. Todmorden therefore finished in sixth. For a change I’ll not bore readers with a long description of what was a meaningless encounter but suffice to say Hebden tried their best to hold on to their crown but simply didn’t have enough strength in their team to sustain a challenge this season. The match score card was:

The game viewer at the end of this post has four of the five games from this match in it. Some of them are quite interesting and I’d particularly like to draw readers’ attention to the slugfest between Martin Syrett and Tom Webster which is highly entertaining toe-to-toe struggle in a King’s Gambit Accepted. The viewer also has Bill Somerset’s critical win against John Morgan in the Courier versus Halifax match and Andrew Clarkson’s game against Dave Keddie from the Tod ‘A’ versus Huddersfield match. My thanks as always to Adrian Dawson for collecting Bill’s game and Andrew for taking the time to share his thoughts on his game and on the match at Todmorden. I’d also like to thank the Halifax Captain Carlos Velosa for his description of events at Courier.

As a curtain call on this year’s League 1 reporting it should be noted that Hebden Bridge ‘B’ defaulted their ‘dead rubber’ at Brighouse. Both those teams go down to play in League 2 next season. It seems highly unlikely that Hebden will be able to field three teams in the lower flight having struggled for numbers all season long.

… and so to League 2. Hebden Bridge ‘C’ finished their season off by playing the leaders Belgrave at the Trades Club. If they could emulate their ‘D’ team colleagues in defeating the front-runners then it was still possible for Halifax ‘B’ to pip Belgrave at the post by defeating Hebden Bridge ‘D’ at home. The last fixture of the night saw Todmorden ‘C’ take on Halifax ‘C’ at home.

As it was Belgrave assumed the mantle of Champions by dispatching Hebden ‘C’ comfortably. Here are the individual scores:

The games from this match can also be found in the viewer below.

Belgrave secured the title with a score of 21 points. Halifax ‘B’ didn’t have to play in the end as Hebden ‘D’ defaulted their match as well. Halifax finished in second place with 19 points. Todmorden ‘C’ were third with 16 points as they defeated Halifax ‘C’ 4 – 1 in their last match and this meant that Halifax ‘C’ finished fourth with 10 points. Hebden ‘C’ were fifth with 9 points, Courier ‘B’ scored 7 and Hebden ‘D’ were last with 2 points (but what a glorious 2 points they were!)

In future posts over the summer I’ll do the usual thing of reviewing the season and the performance of the Hebden Bridge teams and individuals. I’d welcome further comments from players outside the club. Anyone who’s followed the comments posted against last week’s newsflash will see that the debate and opinion has been positive and extensive. Do feel free to contribute. In particular I’d very much like to see some nominations either in the comments here or by email to hebdenbridgechessclub@gmail.com for the best games of the season. I’m going to be writing a review of the Calderdale season for the Yorkshire website and would very much like to feature the best games of the year from right across the leagues not just from Hebden Bridge.

Thank you all for following the website during the season. I hope you’ve enjoyed the coverage and I’m looking forward to what I hope will be another fantastic year in 2014-15!