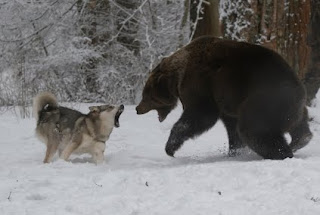 In a week that sees the final round of the UK general election’s live, televised leadership debates and also the continuation of Viswanathan Anand’s World Chess Championship defence against Veselin Topalov in Bulgaria I am pleased to be able to bring Chessticles readers (belated) news of another clash of the titans. Yes, that’s right, Hebden Bridge ‘A’ vs. Huddersfield, round 2!

Readers may remember that earlier in the season Hebden Bridge ‘A’ managed to draw with the reigning champions away from home (and therefore playing on all boards with the black pieces). Since then Huddersfield, much to everyone’s surprise have slipped up dramatically, losing two matches. This meant that before the crucial match started Hebden Bridge only needed to achieve another tie to guarantee them title the Calderdale League title with one round to spare.

Huddersfield came calling with a strong team. Their top two boards were staffed by, in my opinion, even more proficient personnel than they had been able to call up in the first match. On boards 3 to 5 they were only marginally weaker. Despite this, I was relatively confident before the match that we would get the result we needed.

For once (and I must stress this does not happen very often) I managed to score a full point when it mattered most. Following the strategy that I have tried to remain true to all season, I restrained my baser, speculative instincts and played it safe. I even allowed the queens to come off before move 10 in order to gain a small but enduring positional edge. You can see how the game panned out below.

My game was the first to finish on the night. 1-0 Hebden Bridge!

Next to finish was the game on board 1. It seemed that our player missed his regular Huddersfield match up who he has scored heavily against over the last few years and took a full point off in the away match. This time, against a different, but equally familiar foe, things turned out differently. Facing the Two Knights Defence our man got into a tricky situation quite early on. After the game he admitted that he had looked the line up after facing it against the same player last year but that, over the board this time around, he couldn’t remember the best way to play. Black played accurately to prevent white from getting a foot hold and then to drove home his advantage mercilessly. 1-1.

At this stage of the evening I had been finished long enough to get a good look at the remaining three games and I didn’t particularly like what I saw. On board five we were a pawn down in a knight and rook ending. On board two our team captain seemed to have a comfortable position in what looked like a Queens Gambit Exchange Variation but it seemed like the kind of position that carried great danger if he over-pressed for a victory. Finally, on board three matters were complicated as our player had sacrificed a pawn for a strong attack and had been repulsed by solid defending. Black now had a piece for two pawns.

Nail biting, stomach churning tension at the Trades Club! I couldn’t see where we would get another win from at that point in the evening and so it seemed like we would have to get three draws in order to tie the match and that looked anything but straight forward. Next to finish was our captain on board 2. Having tried to find a way of improving his position for as long as he could he sensibly decided to take a draw in position where his advantage looked only theoretical. 1.5-1.5.

Soon afterwards board 5 was finished as well with white finding a nice tactical trick to force a repetition of moves. From a pawn down this was a good result. 2-2.

Now the situation was well and truly taut. On the final board black had given up a third pawn for his piece in order to get the queens off. It seemed a sensible decision as he had a central chain of pawns that appeared very strong. However, white played extremely accurately and managed to hold the position with his extra bishop. Towards the very end of the night a draw was agreed to everyone on our team’s great relief. The final score then was 2.5-2.5. Another epic tied match, but it was enough for us to claim the league title.

Well played and “Congratulations” to all my colleagues on the Hebden Bridge ‘A’ team (including our reserves) for achieving very consistent level of performance right through the year.

2 Responses to “Heavy Weight Encounter (Round 2!)”