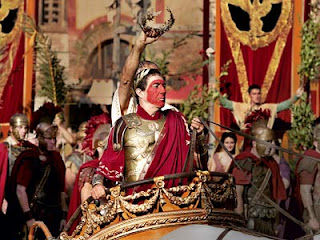 Over the last few months I’ve been reminded of this lesson from antiquity on several occasions as I’ve seen and experienced life at the chess board deliver some reality checks (no pun intended!) When you are on a good run of form, whether this be at chess, or in any competitive situation, it is easy to get overconfident and start to feel like a Roman General enjoying his moment in the spotlight. Victories are easy to come by, your luck is in and you feel unstoppable. It is at this moment that the game tends to hand you a timely reminder that all good things must come to an end.

As I sat enjoying my Christmas turkey in the mid-season break I reflected on an excellent first half of the chess calendar. I had a score of +6 and I was riding high in the Calderdale league with my team, Hebden Bridge ‘A’, being unbeaten. Immediately after the festive holidays I had a little bit of a stutter but maintained my score at +6 through January. Then in February… disaster struck and I lost five in a row including some pretty painful defeats. Admittedly three of these five loses were against strong opponents who I’d normally expect to struggle against. The other two hurt like hell.

Take this first position which lost me my unbeaten record in the Calderdale league. 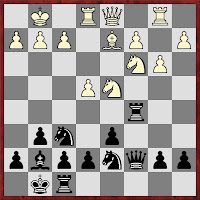 I had managed to get myself into a nice position here. White has played the opening phase in a fairly unambitious manner and had allowed me to generate good pressure down the c-file and a1-h8 diagonal. I was looking for a tactical means of capturing the c2 pawn. I spent quite a long time considering the merits of d5, Rh5, Ne5 and Rc8. Instead of any of these however I instead selected the idiotic Rxc3? As soon as I had pressed the clock I realised what was coming next and sure enough my opponent simply played Nb5 and won the exchange. After this I struggled on deep into the endgame and eventually lost on time but my opponent played well and capitalised on my early blunder, fully deserving his point.
The following week, I was playing in round three of the Calderdale individual championship and was right in the running on 2/2. I got a reasonably kind draw against a really solid player graded just a little below me. Out of the opening I felt I had secured a pleasant advantage with the white pieces and was starting to look for ways to capitalise… 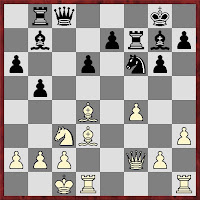 I had just played 17.0-0-0 and my opponent now sunk into a long think. He said after he game that he had expected 17.0-0 and instinctively felt that he had good chances after I had castled long. From my point of view we had just reached the end of a crisis period in the game in which I had managed to exchange my e-pawn for black’s f-pawn in the belief that the resulting pawn structures would be to my advantage in the end game. I also felt optimistic that I could take advantage of the open e-file as well as developing a king’s side attack with moves such as Rhf1, g4 and f5. Sure, there were some weaknesses in my position and some organisation would be needed before I could push on but I was optimistic.

Then, black played 17….Bh6! and after reflecting on this for only a few minutes I realised that in fact I had some serious challenges on my hands. The move played both pins the f-pawn and prepares to attack it ferociously with either Nd5 or Nh5 next move. Having been happy that my dark squared bishop was on the long diagonal I now realised that the h6-c1 diagonal was the more important one. In the end I decided to give up the f-pawn and re-organise my pieces for an attack on the black king but it didn’t emerge and I was well beaten. It’s not always easy to find a move like 17….Bh6! as it means re-positioning a piece that already looks like it is on its optimum square. My opponent deserves great credit for finding the right idea and following it through with some strong play.

This loss dropped me out of the running and put the third seed in the competition in a fine position as he was the only other player aside from my opponent in the game above who reached 3/3 and, as he seemed in excellent form, I fully anticipated he would win and go 4/4 on his own before the final round.

Naturally, it didn’t turn out that way. In round four, playing with the black pieces again, the underdog battled grittily to keep the game tight. They reached a pawn ending and the favourite blundered when he calculated that, although he would queen second he would queen with check and be able to win his opponents new queen via a skewer. In fact the opposite was the case as he didn’t queen with check. Simple mistake to make when you are a little fatigued at the end of a long fight but nevertheless, it was something of a shock outcome.

Finally, to press home my historical observation, I should report that the reigning champions of the Calderdale league, Huddersfield, have now been usurped. Having drawn with them away in our match with them before Christmas we had expected the league title race to go right to the wire with the last game of the season scheduled for Hebden Bridge (we played that match this week – expect more in my next post). Imagine our surprise then, when we learnt that Huddersfield had lost by an odd point to the bottom team in the league in January and then again to the then third, now second placed side at the beginning of March. I’m not 100% sure of my facts here but I think Huddersfield have won the title for at least the last two years, and been unbeaten in the process. It just goes to show that even the most glorious of triumphant chariot rides has to end sometime. Hebden Bridge ‘A’ are next in the line of succession, lets hope we can make it through to the end of this season before we get what’s coming to us!

One Response to “Memento Mori”