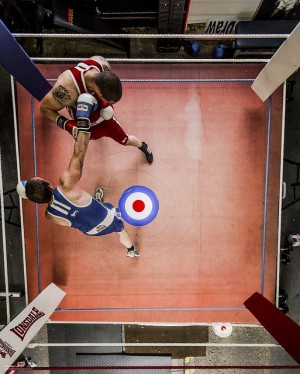 Over the last couple of weeks Hebden Bridge and Halifax have fought a couple of bouts and exchanged punches by winning one each. This image is used under Creative Commons terms and sourced from Defence Images Flickr photo stream

Hebden Bridge teams have played a number of fixtures against Halifax chess club over the last few weeks. Last week Hebden Bridge ‘B’ took on Halifax ‘C’ for bragging rights in League 2. More of that tie later.

First, this week Hebden Bridge ‘A’ hosted Halifax ‘B’ in a match they needed to win to end a three match losing streak and pull themselves away from the relegation zone. This they duly did but the evening was not without its difficulties. First of all the players arrived at the Trades Club to find that, due to a staffing problem, the venue could not remain open past 10.15. That wouldn’t be long enough to play the match so an alternative venue need to be found in a hurry. Thanks then go to the White Lion pub for agreeing to host the match in their snug and turn off the music in that area so that the players no more disturbed than they would have been in their usual venue.

The teams were closely matched on the top couple of boards where, on board 1 Hebden were able to field John Allan for the first time this season. He played Richard Porter. On board Pete Leonard played Dave Sugden. It was in the lower reaches of the board order where Hebden looked like they ought to be in possession of the better chances. On board 3 Dave Shapland held a significant rating advantage over Ray Cully, Andy Leatherbarrow out-graded Vivienne Webster on board 4 and Martin Syrett also out-pointed Barry Wadsworth on board 5.

Indeed, the night got off to a great start when Dave was able to take full advantage of some passive opening play by Ray to launch a direct assault on the Black king right from the opening. As early as move 17 Dave had reached a position where Ray faced either the loss of his queen or check mate.Instead of these he chose the third option which was to resign.

The remaining games were much more closely fought. On board 1 John Allan was making his first appearance of the season for Hebden Bridge and he found himself in what appeared to be serious trouble in the middle game against Richard Porter having decided, perhaps injudiciously, to castle on the opposite side of the board to his opponent in what is usually a quiet variation of the French Defence. Instead of a sterile game however, Richard generated a huge attack on the castled White king while the White king’s pawns stayed on their starting blocks. Somehow though, John managed to hang on and, with both players working under the pressure of a significant time shortage, he managed to hold the draw.

Not long after this Martin Syrett put the fixture firmly into the home side’s hands. He’d be the first to admit that he’s had a miserable run of form of late and so a return to his bread and butter repertoire in the King’s Gambit, Cunningham variation, was most welcome. Martin is very familiar with the ideas in this line and was able to set up dangerous threats against the Black king. Barry tried to keep the position closed but eventually Martin broke through and, once the queens were exchanged, he was able to play a nice combination that ended in checkmate.

Needing only a draw to conclude the match in their favour, Hebden now looked to Andy Leatherbarrow and Pete Leonard to bring home the bacon. Andy had been pressing hard against Vivienne Webster for the whole game having won a pawn early on. He looked on the verge of breaking through as time control was reached but his opponent wriggled and squirmed and , with time running out for both of them, Andy accepted a draw offer to get his team over the line. His position may well have been winning but his time shortage dictated that this was the right decision.

Finally, Hebden’s Captain, Pete Leonard, concluded the evening’s play by accepting a draw with Dave Sugden. This one had been a hard grind in a bishop, knight and pawns ending, Pete had more space and looked like he could restrict Dave’s activity to extract a decisive advantage. However, every time he seemed about to break through Dave found a way to keep himself in the game and, in the end, his persistence was rewarded when he managed to win a pawn. That wasn’t enough to turn the tables completely though and Pete held his ground for a draw easily enough in the end and with neither player having anything to play for from a match perspective.

Here then is the final match scorecard as Hebden Bridge secured only their second win of the season:

Halifax had a little surprise up their sleeves in the form of Pete Hughes who hasn’t played an evening league fixture for quite a while and was last seen playing for Courier. His addition on top board did much to strengthen the visitors line-up as they also brought Vivian Webster, Pete Moss, Barry Wadsworth and Andrew Whiteley.

On paper Halifax held decent ratings advantages on the top and bottom boards with Hebden enjoying a sizeable advantage on board 2 while the other two boards were closely matched. It was all the more surprising then to see that on the boards where the big discrepancies were present the underdog was able to over-turn the odds in each instance as Andy Leatherbarrow held Peter Hughes, Vivienne Webster defeated Martin Syrett and Alex Brown defeated Andrew Whiteley.

These results cancelled each other out and so it was on the two boards where the players were more evenly matched that the result was decided. On board 4 Barry Wadsworth defeated Terry Sullivan while on board 3 Neil Bamford and Pete Moss drew.

Whilst this was going on at the Trades Club a Hebden Bridge ‘C’ team comprising predominantly of juniors, travelled to Todmorden ‘C’ where they found themselves up against some experienced opposition who proved too shrewd for them on the whole. Only John Kerrane managed to avoid a defeat to prevent a whitewash. Despite the score line however, John is really pleased with the progress his young charges are making.

In the game viewer below you will find nine of the ten games played by the ‘A’ and ‘B’ teams in this last round of fixtures.

Next week, its League 1 action again as Hebden Bridge host Brighouse and aim for back to back wins for the first time this season. We’ll bring you a report on that match and an update on the league situation too.

One Response to “Hebden and Halifax trade blows”