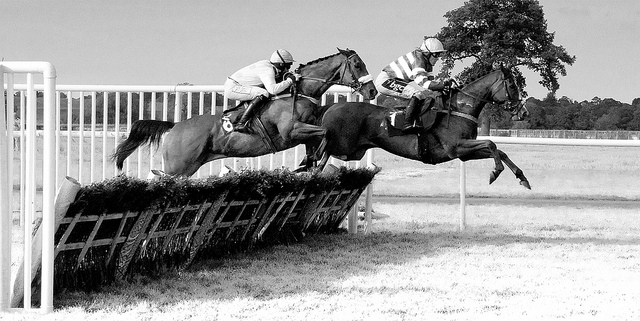 The Calderdale League 1 season is threatening to become a classic two horse race between Todmorden ‘A’ and Halifax ‘A’. This image is used under Creative Commons terms and sourced from vegaseddie’s Flickr photostream

Last week saw the a second consecutive week of League 1 fixtures and, as we approach the half way point in the season the race for the title already looks like it has clarified down to two teams.

Todmorden ‘A’ cemented their place at the top of the table by demolishing a four-man Huddersfield side at home by 4½ — ½. On board 1 Martin Hamer and Greg Eagleton drew their game but Phil Cook, Pete Mulleady and Andrew Clarkson all won their games whilst Dave Patrick was gifted a walk-over as Huddersfield suffered again from a problem they have struggled with for a number of years, getting five strong players to get involved in away fixtures.

This result leaves Tod top with a perfect six wins from six matches. They have played all three of their perennial rivals at home in the first half of the season and so they’ve yet to be tested with the Black pieces away to Halifax ‘A’, Hebden Bridge ‘A’ and Huddersfield. This should give their rivals a little bit of hope.

Halifax ‘A’ are the team who are closest to Todmorden ‘A’. They are two points off the pace having lost just one match away to Tod. Last Monday they kept pace with the reigning champions by defeating Belgrave 3 — 2. Casual observers might have expected a more comfortable margin of victory for the home side but they were missing Darwin Ursal on board 2. They did replace Darwin with John Morgan, who made his first appearance for Halifax having been one of the players effected by the demise of Courier ‘A’ over the summer break. John beat Karim Khan and Carlos Velosa beat Angel Gonzalez on board 4 but boards 3 and 5 were drawn and Bill Somerset suffered a setback on board 1 where he succumbed to Ian Hunter.

Also at Halifax, Todmorden ‘B’ were maintaining their impressive form this season by thrashing Halifax ‘B’ ½ — 4½. Neil Suttie, Mick Connor, Rob Collier and Richard Bedford all won their games and the only draw was between Ray Cully and Mike Huett. This result leaves Halifax ‘B’ rooted to the bottom of the table with a match in hand to play away at Huddersfield. Todmorden ‘B’ also have a match in hand against Huddersfield still to play but they are currently lying in fourth place with 6 points

All of these results meant that Hebden Bridge ‘A’ had an opportunity to climb back up to third place in the table if they could beat Brighouse at home. Having recovered from a three match losing streak in the previous week, Hebden were hopeful of continuing their impressive home form which has seen them defeat both Belgrave and Halifax ‘B’ comfortably.

Brighouse did bring five players (which can sometimes be a problem for them when they are away from home) but they were missing the services of Dennis Breen who is their regular board 1 player. This left their stalwart Robert Broadbent on board 1 to face John Allan. On board 2 Hebden fielded Pete Leonard against Nick Hudson. Dave Shapland played Paul Whitehouse on board 3; Andy Leatherbarrow played a new member of the Brighouse team (which is most encouraging to see) a Mr T.Pryke. On board 5 Martin Syrett played Ronnie Grandage.

Looking at the strength of the match ups it appeared that Brighouse’s best chances lay on the top board. After that the rating gaps between the home and the away players grew the further down the board order you went. Hebden played it safe on the top two boards taking no risks. John Allan’s game with Robert Boradbent was pretty sterile and was agreed a draw fairly early in the evening. Pete Leonard also finished with a draw against nick Hudson. He didn’t really manage to get much pressure from the opening and Nick played solidly.

On the remaining three boards there was a bit more action and entertainment. Andy Leatherbarrow took full advantage of his opponent’s slightly strange and passive opening play. He created structural weaknesses, developed his pieces rapidly and then simply applied pressure to the weak spots until Black’s position caved in.

On board 5 Martin Syrett was enjoying his second King’s Gambit in two weeks against Ron Grandage. Unlike the last fixture against Barry Wadsworth of Halifax ‘B’ though, this time Ron chose to decline the gambit and this simply gave Martin a very comfortable position where he controlled the centre, enjoyed more space and had a nice lead in development.

Ron is a tough competitor though and he hung on gamely, finally forcing Martin to settle for a comfortable if not yet decisive endgame advantage in the form of two extra pawns. Slowly but surely Martin squeezed the Black position and although Ron may have missed a good chance to escape at some point, the result never really looked in doubt. Hebden were home and hosed with one game to finish.

And what a tense and nail-biting affair that game was. Dave Shapland had played one of his more eccentric opening lines in the form of 2.a3 against the Sicilian. If his intention was to confuse his opponent he certainly seemed to have succeeded for after ten moves Black had already blundered a couple of pawns. As he tried to find a way to take advantage of Dave’s provocative play, Paul Whitehouse attempted to mix things up himself, miscalculated a combination and found himself down an exchange and a pawn. At this point Dave could have put the game away but he missed the brief window of opportunity and then struggled to put Paul away despite Black being in a desperate tangle.

As the game reached time control the position had become intensely complex and very tense. In trying to get to the Black king Dave had allowed Paul the chance to get at his own monarch with his queen and a knight. The game was on a knife edge and Dave was forced to take a huge risk in order to avoid a draw by repetition. The gamble paid off for Paul missed the one rather difficult chance he was given to gain a decent advantage and then found that his attack had burnt out and he had both his knights en prise. It was all over and Dave breathed a sigh of relief.
The final match score card looked like this:

So Hebden Bridge do now sit in third place although both Huddersfield and Todmorden ‘B’ below them have games in hand and wins would see them overtake Hebden.

In the game viewer below you’ll find all the games from this fixture.