Encounters between Hebden Bridge and Huddersfield have served up some classic struggles over the years but few ties will have matched last Thursday’s Calderdale League 1 epic. This year the fixture list ordained that the Hebden Bridge ‘A’ and ‘B’ teams would travel to play their Huddersfield counterparts in League 1 on the same date. Hebden ‘A’ arrived undefeated and optimistic of challenging the Champions, Huddersfield ‘A’, for their title this season. Hebden ‘B’ travelled knowing that Huddersfield ‘B’ offered them one of their best chances to score an away win this year.

Both matches ended tied 2½-2½ after gruelling and nail-biting battles. Across the 10 boards of the two fixtures there were only two drawn games with both clubs collecting four wins a piece. Several of the games were decided by tactical oversights. Here are a selection for you to test yourself with (answers at the end of the post): 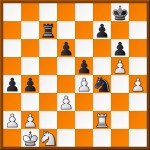 White has just played 34.Rf2?? What has he overlooked? 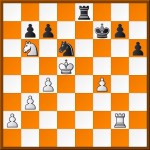 It’s odd how many mistakes are made straight after the time control. White just played 37.Nxb6?? expecting that 37…cxb6 38.Kxd6 will happen next. How did Black surprise him? 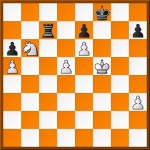 Black has won the exchange for a pawn but now zeintot claimed another victim as he now played 48…Rc5?? No prizes for spotting White’s response. 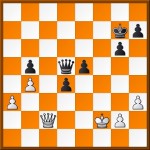 White has just played 34.Qc2. How did Black press home his advantage? 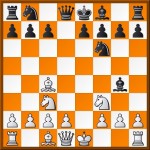 Black has just played 5…Bg4 walking into a thematic trap . What did White play? 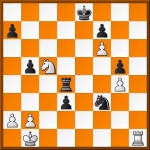 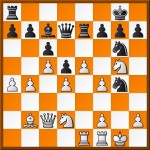 Black to play and lose! What happened next?

Hebden Bridge ‘A’ faced a difficult challenge in the form of the reigning champions against whom they perenially seem to find the going  tough. The Huddersfield team out graded Hebden on all boards although the bottom two boards were more closely matched than the top three. In the event Hebden were never behind in the match and might even have won it before Huddersfield managed to draw level.

The first game to finish was on board 2 where Hebden Bridge Captain, Dave Shapland was the beneficiary of a most unusual blunder by Chris Booth just as the game appeared to be simplifying and heading for a draw. Shortly after this the board 3 game was completed with Huddersfield’s David Firth equalising the score with a fine win against Pete Leonard. Nick Sykes put Hebden Bridge in front again when he beat Nigel Hepworth in a game that he always seemed to be well in control of.

Another point would have brought Hebden Bridge a superb and glorious victory and on board 5 Dave Sugden appeared to be on the verge of delivering it in a truly nerve-shredding encounter with Huddersfield’s Captain, Robert Sutcliffe. The dreaded zeintot became a factor in a complicated struggle deriving from a Benko Gambit. Dave seemed to be in great danger but somehow managed to find a way out of the situation via a series of clever resourceful moves. He managed to win the exchange and offered Robert a draw that could have sealed the match for Hebden. Robert was compelled to decline and shortly after Dave made a critical mistake in time trouble and resigned on the spot.

This just left the board 1 game to be completed with the match all square. In this game Hebden’s Darwin Ursal had had to defend himself for a long period against Mitchell Burke. Mitchell had won a pawn and appeared to be headed for a straightforward victory in a pawn a rook ending. However, Darwin defended himself with great determination and accuracy and it became apparent that White’s task was not so easy. As both players’ clocks wound down the game bowled on and on leaving the spectators anxious and excited until the very end when Darwin finally managed to scoop up Mitchell’s last pawn and the draw was inevitable. The players shook hands and everyone breathed a sigh of relief. A drawn match and a fair result!

Meanwhile the ‘B’ teams had been serving up a similarly dramatic bout. Hebden Bridge had turned up severely depleted. Huddersfield had also struggled to get their regular players out so the sides still seemed relatively closely matched. Board 5 was first to finish and here Hebden’s Danny Crampton (the ‘D’ team Captain) defended himself well for a while but then blundered into a mate in one. Board 4 finished shortly afterwards and here Hebden’s Neil Bamford collected a draw from Mark Rojinsky.

At this stage of the evening, despite being behind in the match, the scenario looked good for Hebden Bridge as the remaining boards all looked winnable. On board 1 Andy Leatherbarrow continued his excellent form this season by winning against Brian Corner in a queen and pawn ending to level the match and bring his tally for the season to 2/4. Bearing in mind his own grade and the strength of the opposition he has been up against on board 1 a 50% score is an excellent return thus far for Andy.

Sadly, tragedy was about to strike for the ‘B’s however for, on board 3, where John Kerrane had slowly acquired a wonderful advantage, the tables were suddenly turned in the most dramatic possible fashion. John overlooked a mating net that his opponent and craftily spun and suddenly Huddersfield were ahead again with just one game left.

Lucky for Hebden then that it was their ever reliable Captain, Martin Syrett, in command of this station. So many times in the past he has been required to achieve a result in the last game to finish and he once again did his team proud by recovering yet again from a tricky situation to beat young Peter Hepworth and tie the match.

The games from these two league matches can be viewed below. I’ve also set them up in the new Chessbase viewer which you can reach by following this link. You’ll need to download Microsoft Silverlight if you don’t already have it. I’d heartily recommend that you do download it as this viewer is definitely the solution that I’ll be using on this website henceforth. It displays all games in a recognisable Chessbase format and you can download games as well as playing through them.

And so, after two epic struggles, the honours were even. This leaves both Hebden Bridge sides in interesting situations in League Division 1. Hebden Bridge ‘A’ are in third place on board count over Todmorden ‘A’ who defeated Belgrave 2-3 to condemn the Halifax side to the bottom of the table. Both Hebden and Todmorden are 2 points behind Courier ‘A’ and Brighouse who top the table with 7 points each having drawn with each other in the other match to take place on Monday. The ‘A’ team can take some comfort from the fact that they have now played the two strongest line-ups in the division away and come away with draws. They have still to play the top two so wins against them could see them catch or even over haul them by Christmas.

Hebden Bridge ‘B’ lie second from bottom on 2 points, a point above Belgrave and with the same score as Huddersfield ‘B’ who they are half a point behind on board count. At this early stage of the season it appears that these three will be locked into a relegation struggle with one team surviving and the other two descending.

Incredibly the champions, Huddersfield ‘A’, have only 3 points after 4 rounds of play. However, before the teams above them get too complacent, it should be pointed out that their matches have been against the teams above them and they now have a run against the bottom three before the mid-season break. This year’s title still looks wide open with any of the top 5 still in with a shout.