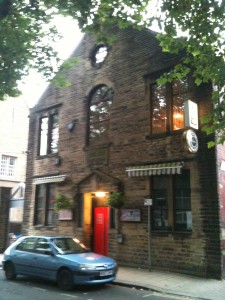 The Trades Club, Holme Street, has become something of a fortress for Hebden Bridge ‘A’ who haven’t lost in a home fixture since September 2014.

It’s been a little while since this website last reported on the Calderdale Leagues. A combination of organising the Danny Gormally simul and some holiday down time has resulted in something of a service interruption. Time to put that right. There’s certainly been no shortage of chess going on since we last reported nearly a month ago.

League 1 first, as it should be. Hebden Bridge ‘A’ have enjoyed back to back home fixtures at the Trades Club and have taken full advantage of having White on all boards to collect a couple of valuable wins. But let’s not get ahead of ourselves. First of all we must examine the sharp end of the League 1 stick.

When we left it last we billed the top of the table clash between Halifax ‘A’ and Todmorden ‘A’ as potentially season-defining. As it stood, Tod, having won the reverse fixture at home earlier in the season, were two points clear at the top of the table and had a better board count. Halifax had kept pace with the reigning champions after their defeat but really needed to overhaul them in their home fixture to have any chance of regaining the title they won in 2014.

The two met in round 8 on the 15th of February and the big guns were all present. The home side had done everything they could to field their strongest line up as their team sheet read Ursal, Somerset, Porter, Morgan and Patrick. Todmorden meanwhile were not at their absolute strongest. They had Messrs Hamer, Cook, Clarkson, Patrick and Innes in their side. This meant that, though pretty evenly matched, Halifax had a big rating advantage on the bottom board and a slight deficit on board 3. A close match was on prospect but ultimately the ratings of the two line-ups gave no clue to the outcome of the individual encounters.

First of all David Innes beat Carlos Velosa on board 5 despite giving away over twenty rating points. If this was Tod’s potential weakness then it had not been exploited. However, that was the last full point Halifax dropped as the top four boards did the business. Darwin Ursal and Richard Porter held Martin Hamer and Andrew Clarkson respectively while Bill Somerset beat Phil Cook and John Morgan beat his Courier team mate from last season, Dave Patrick. This was Dave’s first dropped point of the season. So Halifax won 3 — 2 and moved back level on points with the champions. Game on!

Whilst all this was going on Huddersfield were dispatching Halifax ‘B’ at the same venue 1½ — 3½, Belgrave were pretty much ensuring their League 1 status for another season as they beat Brighouse away 2 — 3. Finally, Hebden Bridge ‘A’ avenged themselves on Todmorden ‘B’ who had beaten them at Todmorden earlier in the season. The Tod second string have acquitted themselves nobly this season and have a line-up that can give anyone side in the league a run for their money when they are all on their game. On this occasion Hebden took full advantage of being at home and all having the White pieces and when a mix up meant the Tod had to default the bottom board Hebden had all the trump cards the needed to secure victory.

Alastair Wright made a very welcome return to Hebden Bridge chess club after a hiatus from the game. He played on board 4 and drew without any problems against Richard Bedford. On board 1 John Allan also drew against Neil Suttie. The decisive results were on boards 2 and 3. First, Pete Leonard put the match out of the visitor’s reach when he beat Mike Huett. Then, the last game to finish saw Tod’s Mick Connor play a very good game against Dave Shapland, exploiting his one opportunity to the full to avenge himself for a painful defeat in the final round of last year’s Calderdale congress.

Two weeks later the League 1 teams were in action once again, but in the meantime, it appeared that Todmorden ‘A’ and Todmorden ‘B’ were supposed to have played their postponed derby fixture. For whatever reason the ‘B’ team defaulted all boards giving their colleagues a walk-over. Whilst there may well have been a perfectly legitimate reason for this it doesn’t leave a good taste in the mouth for the ‘A’ team, no top of the league only on board count, gained 5 precious board points over their rivals Halifax. There will no doubt be accusations of collusion in the event that the title race comes down to board points and it would have been better for these two sides to have contested their fixture properly.

The long and the short of it is that League 1 has seen a steep rise in defaults this season — 21 boards so far — and an unhelpful number of fixtures have been postponed and on several occasions this has been due to teams not being able to get full line-ups out which suggests more defaults have been avoided in this way. It doesn’t bode well for the future of the league that clubs are struggling to get five players out for the scheduled fixtures so regularly. We should perhaps polish our halos by noting that Hebden Bridge is the only team in League 1 not to have defaulted a single board all season!

OK, rant over… back to the action. On February 29th a further fixture was postponed in the shape of Todmorden ‘A’ against Halifax ‘B’. This gave Halifax ‘A’ the chance to go top of the league if they could beat Hebden Bridge ‘A’ away at the Trades Club. On paper it certainly looked like Halifax had a great chance. Their team lined up with Darwin Ursal on board 1 and continued with Winston Williams (making his first appearance this season), Bill Somerset, Carlos Velosa and Sam Scurfield. Hebden meanwhile had Andy Bak on board 1 and then John Allan, Pete Leonard, Nick Sykes and Alastair Wright. To have any chance of getting a positive result Hebden would need to perform strongly on the bottom two boards and hold their own on the upper boards.

In the event that was exactly what they managed to do. Darwin overcame Andy on board 1 to give Halifax the lead but both John and Pete managed to draw against their higher rated opponents to give Hebden a chance if they could win at least one of the two remaining boards. The way for a dramatic denouement had been paved. It arrived in the form of some serious zeitnot for Sam Scurfield on board 5 during which he moved his queen, realised it was en prise and moved it again. Alastair called him on it but Sam thought he had not let go of the piece. The only eye-witness was John Kerrane, who when asked, confirmed that Sam had let go of the queen. This left the Halifax player with little choice but to resign as he had no means of contesting the game without his queen.

That levelled the scores but, as a polite but slightly noisy discussion about the board 5 result continued, Nick Sykes and Carlos Velosa were still playing their game and the result of the match now hinged upon it. Fortunately for Hebden, Nick had succeeded in winning a piece early on in the middle game so it was really a case of making sure he didn’t throw away his advantage. He didn’t and converted on move 46 to give Hebden a hard but well-earned victory and putting a major dent in Halifax’s fresh hopes of league regaining the title. They will hope that Hebden can repeat their feat of daring-do when they host Todmorden ‘A’ next Monday the 14th of March. That would ignite the championship race once again.

On the same evening that this drama was unfolding, Huddersfield were quietly continuing their recent consistent run by beating Belgrave away 2 — 3 (they won the top three boards and lost the bottom two) and Tod ‘B’ were bouncing back from their recent run of bad results by defeating Brighouse 3½ — 1½ at home (Tod won on all three of the bottom boards to take the win). It’s currently unclear why Todmorden ‘A’ did not also play their home fixture against Halifax ‘B’ but this match appears to have been postponed.

So, with 4 (or 5 for half the teams in the division who still have postponed fixtures to play) to go on the season Todmorden ‘A’ and Halifax ‘A’ have 16 points each but Tod have two more board points and a match in hand against Halifax ‘B’. Hebden Bridge ‘A’ and Huddersfield are both on 12 points with Hebden third thanks to an extra half board point, though Huddersfield have a game in hand to play against Tod ‘B’. In the bottom half the relegation battle already appears to be over. Belgrave have 9 points and Tod ‘B’ have 8 which probably means they are both safe because Brighouse have just 2 draws to their names and Halifax ‘B’ have only 1.

There are a number of games from the two Hebden Bridge ‘A’ fixtures in the game viewer at the end of this post.

Now on to league 2 where eight of the scheduled ten fixtures have now been played and the title and promotion race is therefore in its final stages. The last round of fixtures was played on 22nd of February and saw a tough night for the juniors in the Hebden Bridge ‘C’ team who went down after a hard fight with their ‘basement buddies’ Halifax ’D’. John Kerrane reports:

All five junior players made a good start, and half an hour into the game, the seemed to be doing well on three out of five boards. However, gradually, blunders and errors of judgement took their toll, and once the final game, a tough struggle between Toby Dodd for Hebden and Michael Tait for Halifax, finished in a win for Tait, the visitors went home with a 0 — 5 win.

This results condemns the Hebden ‘C’ outfit to the bottom of the table. Their results have not really been a reflection of the improvement this current crop of juniors are showing. If they keep at it then it won’t be long before the results start coming for them. Halifax ‘D’ meanwhile move onto 5 points and have now leapfrogged Courier into 6th place on board. count.

Elsewhere Courier lost narrowly to the top team Halifax ‘C’ while the Hebden Bridge ‘B’ team had a minor malfunction away at Todmorden ‘C’ as they lost 3 — 2. They have now lost contact with Halifax ‘C’ who would need to lose both their remaining fixtures and see Hebden win both of theirs for there to be any chance of Hebden winning the league.

On Monday both leagues return to action as Hebden Bridge ‘A’ host current champions Todmorden ‘A’ (this match will be played at the White Lion Hotel on Bridge Gate as the Trades Club is unavailable), Hebden Bridge ‘B’ travel to Halifax ‘C’ in a match they must win to keep any hopes of winning the league alive, and finally Hebden Bridge ‘C’ host Todmorden ‘C’.