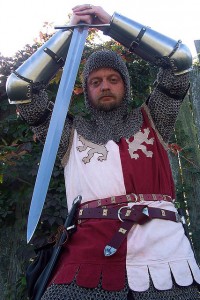 If one lives by the sword one has to be prepared to die by it also. Sadly last Monday Hebden Bridge ‘A’ were on the wrong side of the violence. This image is used under Creative Commons terms and sourced from One Lucky Guy’s Flickr photostream

The Hebden Bridge ‘A’ team’s League 1 campaign has begun with an unusually bloodthirsty set of encounters. Having lost to Huddersfield 3-2, with three decisive games and one very hotly contested draw, in their first match of the season they faced Courier ‘A’ and Belgrave in back to back Monday night fixtures on the 6th and 13th of October and a veritable cascade of blood was split in both matches.

On the 6th they hosted Courier ‘A’ who last season came within a whisker of winning the title and served up a double helping of misery to Hebden at home and away. Frankly, the team did not expect much from the match as they had a weaker line up (without Matthew Parsons and Dave Shapland) than in the corresponding fixture last season. However, Courier were also a little bit weaker as Phil Watson played on board 1 for them at the Trades Club in 2013 and he was replaced by Tony Slinger (still a very strong player) for this match. Gone too was last season’s board 5, Pete Hughes, replaced by a slightly weaker player on paper this time in the form of Dave Colledge. Hebden were still out graded on every board but the bottom one then.

As it turned out the Trades Club men were in ferocious mood as they over turned the odds on the top two boards and on board 4 and drew on board 5 to secure an splendid victory and gain a measure of revenge for their shortcomings last season. Team Captain Pete Leonard provides us with some of the match details.

I finished first, after a surprisingly easy victory against John Morgan. Quite uncharacteristically, I sacrificed a piece for two pawns; this was Fritz’s preferred move, so it was sound as well! John immediately blundered and it was then just a question of making sure I didn’t throw it away. 1-0 to Hebden Bridge.

Nick Sykes opened 1.d4, as he said, not wishing to face Robert Clegg’s French. Robert opted for a King’s Indian, which it turned out Nick knew much better than he did. By the time I looked, Nick had a very nice position, with an advanced c pawn that eventually the game for him. 2-0 to Hebden Bridge.

On board 4 Andy Leatherbarrow got into a frightful pickle on the king’s side against Dave Patrick. He got into time trouble as well and went down under pressure. 2-1 to Hebden Bridge.

Andy Bak gained a small advantage early on and just kept it. He finished off nicely after Tony Slinger moved his king to the worst possible square in an endgame. 3-1 to Hebden Bridge.

Finally, on board 5 Martin had looked to be in a dreadful mess against Dave Colledge. He won a pawn but omitted to get his king into safety. Dave missed plenty of winning chances, and was still somewhat ahead when they reached the time control. By that point, we were 3-1 up, so Dave generously offered a draw, which Martin accepted with alacrity!

So there were four decisive games out of five in that match. Then last week Hebden went one better at Belgrave as all five games in the match ended with a resignation rather than a peace treaty. Sadly the result of the match was not such a happy one!

On this occasion Hebden looked like the favourites on paper as they out graded their opponents on every board. The night got off to a splendid start for them as Nick Sykes quickly won a piece for just a pawn against Les Johnson on board 4 and Dave Shapland appeared to have Karim Khan completely bamboozled with his obscure opening play on board 3. The other three boards all began in much more measured and closely contested fashion.

Mid-way through the evening it looked like everything would go according to plan as Pete Leonard pounced on Gordon Farrar’s mistake in the endgame to put Hebden one point up and Nick Sykes inevitably compelled his opponent’s resignation soon after to make it two. Surely nothing could go wrong from here.

Sadly it could. On board 1 Andy Bak appeared to overlook a tactical shot for a material advantage and ended up material down against Malcolm Corbett. He struggled on to the very end of the evening trying to hold a rook and pawn against queen and pawn ending but finally Malcolm’s technique privailed and he converted the full point.

Before this Andy Leatherbarrow had lost control in a tense and complicated strategic struggle with Mike Barnett on board 5. Although he only dropped a pawn his position fell apart in the ending.

The true tragedy was taking place on board 3 however. Dave Shapland had managed to gain a great measure of control in the position out of the opening against Karim but there was still much work to do. The position was very messy and Dave realised that he needed to take some time out to consolidate his position and complete his development before pressing forwards. Karim appeared to be restricted to fairly passivity but defended himself resolutely until he played an inaccurate move that allowed Dave to grab a pawn and demolish the defences around the White king.

Normally Dave is in his element in this kind of situation and he increased his advantage until it was a winning one… but it took him too long on the clock to do it. With both players in some time trouble and the position still terribly complicated Dave overlooked a defensive resource, mistakenly pressed ahead with his attack when he needed to defend and suddenly found himself getting checkmated. Sometimes when you live by the sword, you also die by it.

The outcome was a stunning reversal and Belgrave continue to be a real bogey side for Hebden ‘A’ when they are playing at home. Here’s the final match scorecard:

Elsewhere in League 1 the title seems to be becoming a two horse race between Huddersfield and Todmorden ‘A’ already. On the 13th Huddersfield travelled to the champions Halifax ‘A’ and dealt their hopes of retaining the title a huge blow by beating them 2 — 3. The week before Halifax had travelled to Todmorden ‘A’ and lost 3½ — 1½ so they are now 1 and 2 for the season to date. Critical to Huddersfield’s success last week was Matthew Parsons’ win on board 1 against Winston Williams whilst Daves Firth and Tooley also won against Sam Scurfield and Scott Gornall respectively.

Todmorden ‘A’ seem to have found some very handy new players this season. They travelled to Brighouse (a destination they’ve performed poorly at in the past) without top board Martin Hamer but they came away with a convincing victory of 1½ — 3½. The damage was done in the middle order by Messrs Cook, Gil-Fresno and Clarkson.

All this means that Tod and Huddersfield are the only two teams with a perfect record and next Monday that statistic can’t fail to change as the two play each other at Todmorden as Huddersfield begin the season with four away fixtures in succession! It looks like we’ll find out what these two teams are made of.

Courier ‘A’ bounced back from that defeat to Hebden Bridge by seeing off Tod ‘B’ at home last week. This puts them back in touch with the leaders as the only other team with two wins to their name. Behind Courier, Belgrave are the fourth team in the table with a win, a draw and a defeat. Then come Hebden ‘A’ and Halifax ‘A’ with a single win each, Brighouse with a draw and Tod ‘B’ prop up the table with no points thus far. They have however been very competitive in all their matches and won’t be taken lightly by anyone.

Next Monday besides the Todmorden vs. Huddersfield match there is also a match between Halifax ‘A’ and Courier ‘A’ which you’d already have to classify as a ‘must win’ for the title holders. Meanwhile Hebden Bridge travel to Brighouse knowing that they need a result to stay out of the relegation dog fight and Todmorden ‘B’ host Belgrave hoping to get their season off to a start at the fourth attempt.

In the game viewer below you’ll fine a number of games from the last two rounds of Hebden Bridge fixtures as well as the game between Matthew Parsons and Wintson Williams which Matthew kindly sent on to us.

4 Responses to “Live by the sword…”