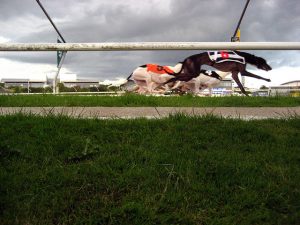 They’re away! It all began again in the Calderdale Evening Chess League on Monday night. This image is used under Creative Commons terms and sourced from Tomas’ Flickr photostream

On Monday night the Calderdale Evening Chess League started up again as a round of League 1 fixtures were played.

As is always the case where any club has two or more teams in a division they are drawn to play each other in the first fixture of the year to ensure there can be no hint of collusion later in the season. This season Hebden Bridge, Huddersfield and Belgrave all have two teams. Hebden Bridge actually have three with the team based at the Golden Lion now part of the club and named Hebden Bridge ‘A’.

As Golden Lion were last season’s champions (their fourth title in succession which is a feat only ever bettered by Courier ‘A’ who won the Anderson Trophy five successive times between 1986-87 and 1990-91) let’s start with them.

At the core of the Golden Lion team is the same spine that has helped them to those last four league titles, Martyn Hamer, Andrew Clarkson and Phil Cook. This year though their top scorer from last season, Dave Shapland, has based himself back at the Trades Club as Captain of Hebden Bridge ‘B’ and David Innes and Marc Turu, who played on board five between them for most of last season, have both moved on. In their stead came Andrew Swales and Jon-Paul Ellis who occupied the bottom two boards as they hosted Halifax ‘A’.

Halifax have had a turbulent few seasons themselves. They used to have a trio of super strong players on the top three boards themselves but Winston Williams and Darwin Ursal were both missing last season and the team felt their loss keenly. However, for this first match of the season, Winston was back on board 1 and with Bill Somerset on board 2, Richard Porter on 3, Carlos Velosa on 4 and Sam Scurfield on 5, Halifax had a stronger line up than they’d managed to put out at any point in 2017-18. 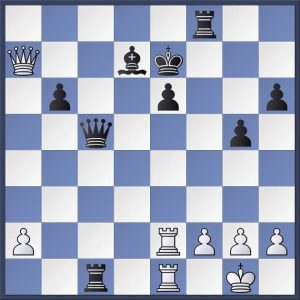 Porter vs. Cook. White to move.

It was always likely to be a tall order for Hebden ‘A’ on the lower boards and they weren’t helped when JP lost his game quickly and somewhat noisily. Unfortunately, this caused some distraction to other players on both sides and Andrew Swales lost his game shortly afterwards.

This put the top three Hebden ‘A’ players under a great deal of pressure and the remaining games went on long into the night. They could very well have pulled it off. Martyn managed to beat Winston, Andrew had Bill on the rack for significant chunks of the evening only for his adversary to defend himself stoutly and resourcefully to hold the balance and a draw.

This just left Phil cook and Richard Porter to decide the match. If Phil could win the match would be tied. Nay other result and Halifax would steal the win. Phil was a piece and a pawn up when he made time control and all looked well but it seems he may have drifted back into time trouble for he made a most uncharacteristic blunder on move 41 and this basically cost him the game on the spot as Richard spotted a nice tactic. See if you can find it in the position on the right.

The games from the top three boards can be found in the game viewer at the end of this post. Here is the final match score card:

So, an early season set back for the reigning champions that will give the other teams in the League this year hope of stealing their crown. There is a long, long way to go though.

Meanwhile at the Trades Club Hebden Bridge ‘B’ were playing their derby match against Hebden Bridge ‘C’. Hebden ‘B’ welcomed back the strongest player in the league (on paper at least) in the form of Matthew Parsons. Dave Shapland, Pete Leonard, Sam Swain and Neil Suttie made up their formation.

Hebden Bridge ‘C’ had the luxury of having more players than they needed and so their Captain, Martin Syrett generously sat the match out to enable others to play. The ‘C’ team lined up with Andy Leatherbarrow, Neil Bamford, John Kerrane, Terry Sullivan and Luca Curry. With significant differences in the players ratings on all the boards this match always looked like it would be a tough challenge for the ‘C’s but they’ve been known to cause derby upsets before and they put up spirited resistance before succumbing on this occasion. 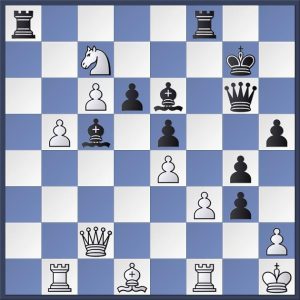 Leatherbarrow vs. Parsons. Black to play

The first game to finish saw Dave Shapland take advantage of some early season rustiness on Neil Bamford’s part to win swiftly but the other games all went on much, much longer. On board 3, the lack of ‘match fitness’ (if you can call it that!) showed itself even earlier as Pete Leonard confused two different variations of the Grunfeld Defence and lost a pawn as early as move 6. Sometimes, this kind of thing can be overcome but John Kerrane maintained his material and restricted Pete’s counter play for quite a long time. Later in the game he gave Pete a glimmer of hope before finding the right way to close out the game with some good technical play. The match was level.

Sadly, that was as close as the ‘C’ team got. First, Matthew sealed a fine win with the King’s Indian Defence by finding a very smart pretty tactic. See if you can spot it in the diagram on the right. Then Sam saw off Terry in the endgame before Neil did much the same against Luca although he had held a material advantage for a significant chunk of the evening.

All five games from this match are in the viewer at the end of this post. Here are the final results:

The third match to take place on Monday night was the one between Belgrave ‘A’ and Belgrave ‘B’. Again, on paper this looked like it should have been straight forward for the home team, but, playing Black and with a rating advantage on every board but board 5, they struggled greatly.

Gordon Farrar continued his strong recent form by holding Ian Hunter to a draw on board 1. New recruit Keith Marsh and Les Johnson did the same to Dave Patrick and Malcolm Corbett respectively. Meanwhile, the only player in the ‘A’ team line up to have a lower rating than his opponent (Steve Harrington against Angel Gonzales) won his game and this left Karim Khan with the task of holding Dave Colledge to a draw to squeeze out a win for Belgrave ‘A’. Sadly he was unable to manage it and Dave won the last game of the night to finish as the ‘B’ team took a very creditable draw indeed.

On Wednesday night Huddersfields ‘A’ and ‘B’ teams were due to meet but (perhaps unsurprisingly given their recent history) the fixture was postponed until next week. We will try and bring you that result then.

League 2 starts next week and the good news is that Huddersfield have been able to belatedly enter a ‘C’ team to the League which means that there won’t need to be a team taking a bye in each round of matches. Very welcome news that and so Hebden Bridge ‘D’ will host Huddersfield ‘C’ next week.

One Response to “Off we go again!”