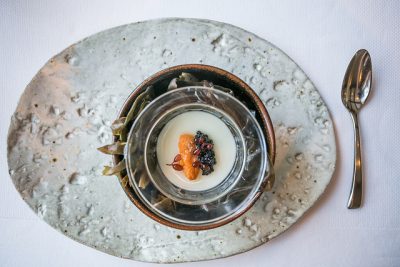 Today readers, we offer you the chess version of an amuse bouche as we prepare for the start of the new season tomorrow night. The image above is evidently an amuse bouche of raw milk, sea urchin and sea grapes (not sure that sounds awfully appetising!) The image is used under Creative Commons terms and sourced from City Foodsters Flickr photostream

An amuse bouche, often accompanied by a complementing wine, are served both to prepare the guest for the meal and to offer a glimpse into the chef’s approach to the art of cuisine. The term is French and literally means “mouth amuser”

The new Calderdale Evening Chess League season begins tomorrow night. So, on the eve of hostilities opening up once again, the time felt right to inspire, titilate and tantilise your chess senses with whatever the chess equivalent of an amuse bouche would be. This takes the form of a highly entertaining and very beautiful game that was played in the recent Korchnoi Memorial tournament.

Before that though, lets remind ourselves of the Calderdale League 1 fixtures taking place up and down the valley this week.

First of all on Monday 17th:

And then on Wednesday:

The shape of League 1 feels like it’s changed quite a lot compared to last season. Halifax ‘B’ and Brighouse have dropped down to League 2 to be replaced by Huddersfield ‘B’ and Belgrave ‘B’. Neither Huddersfield nor Belgrave have had two teams in the top tier for quite some time. Stay tuned to these web pages for a report on these matches later this week.

Next, we must report on the outcome of the Hebden Bridge Chess Club Lightning tournament which was advertised here a couple of weeks ago. Here’s a brief report from John Kerrane:

To round off the Summer Programme, we held our Annual Lightning Tournament on Monday the 3rd of September at the Golden Lion, Todmorden.

There were plenty of slip-ups and oversights as usual in Lightning Chess, making it a light-hearted way to end the summer. Eleven players entered the tournament, not a bad attendance at all considering the change in venue. Several of the regular Golden Lion players were there, which gave us the strongest field we’ve ever had.

Matthew Parsons led from the outset. Although he was closely challenged in all six rounds, he ended the outright winner on 4½/6, with Martyn Hamer, Andrew Clarkson, Dave Shapland and Martin Syrett all in second place with 4/6.

The individual scores of all eleven entrants were:

Congratulation to Matthew for winning against some stiff competition.

Now, let’s turn our attention to the entertainment! Take a look at the position on the right. White is to play and has already invested a knight to draw the Black king out to the f6 square but now Black has just played 22… Kxf6 instating an attack on the White queen. See if you can find the idea that enabled White to crown the game with a stunning finish.

The whole game is well worth a closer look and there are a series of surprising and beautiful tactics that preclude this position. There are also a fair few afterwards! I’ve added the whole game into the viewer at the end of this post so that you can find the answer to this puzzle and also enjoy the whole game.

It’s not surprising that this game as been widely circulated and celebrated on the internet so I’ve also embedded a YouTube video to Agadmator’s channel where he covers the game and covers some of the key variations.

I hope that this will serve as an appetite whetter for the chess to come in Calderdale over the coming months.