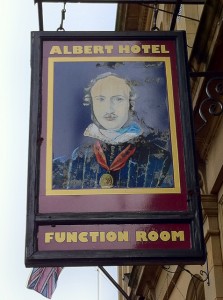 After a nice long break for the summer I’m starting up the website again as the usual pre-season activity begins. Last week six Hebden Bridge players travelled to Keighley for a friendly match that was a return tie for last year’s equivalent which I think was played over ten boards.

The new Calderdale league season approaches, and Hebden Bridge Chess Club accepted an invitation from Keighley Chess Club to a warm up match at their home venue, The Albert Hotel, Keighley. A six-strong team from Hebden Bridge set out across the moor on Wednesday evening to take up the challenge.

The Hebden side was a little weakened since the corresponding match last year, and were surprised to find that Keighley had made a very strong addition to their line-up in the form of Greg Eagleton, one of Huddersfield’s leading players.

A couple of blunders on lower boards left the Hebden side struggling, and although the other team members fought back hard, the match slipped away from them. The last game to finish was between Eagleton and Hebden Bridge captain Pete Leonard, who put up a strong fight, but succumbed in the end, leaving the home side with a 4-2 victory.

Pete Leonard and Nick Sykes have annotated their games and these can be found in the game viewer at the end of this post.

Here are the important dates coming up in the month of September:

I’ll be posting reports on both the simul and the lightning competition as well as a review of last season and a preview of the forth coming one. in the next few weeks. Stay tuned!