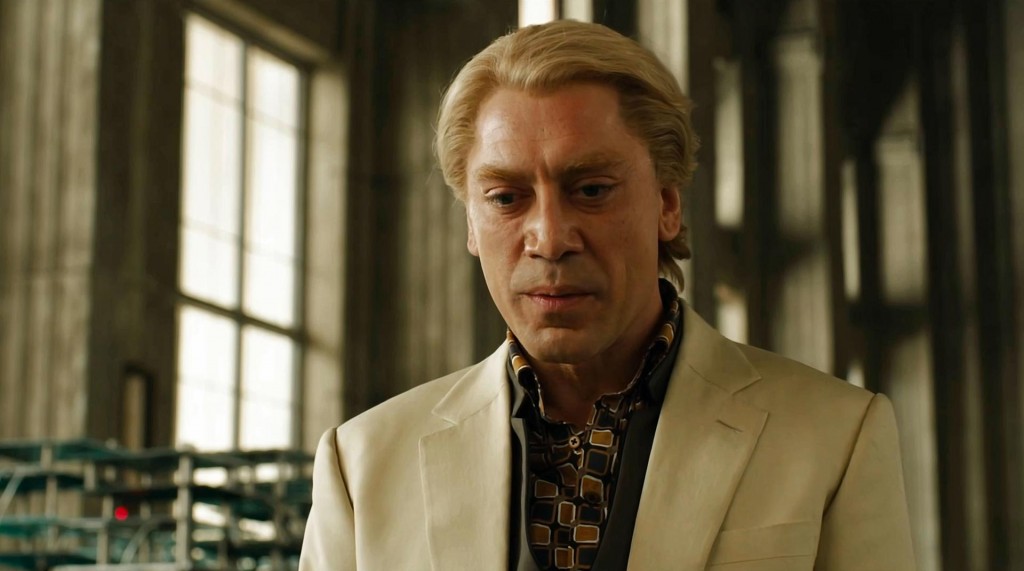 “Now, they only eat rat”: Javier Bardem as Raoul Silva in the most recent Bond film, “Skyfall”

I think I’ve used pretty much every analogy under the sun to describe the nature of this season’s extraordinary title race, but here is one more…

There’s a scene in the most recent James Bond film “Skyfall” where the treacherous super-villain Raoul Silva, played by Javier Bardem, recounts to a physically restrained James Bond (who would probably be disinclined to listen to him otherwise!) an anecdote from his childhood about the method his Grandmother used to rid the family island of a rat infestation. She buries an oil drum on the beach, hinges its lid and then wires some coconut to it. One by one the rats come for the bait and drop into the barrel where they starve until their survival instincts turn them against one another. Eventually, the strongest two rats have killed and eaten all the others and they can be turned loose again only…

This memorable vignette sprang to my mind as I reflected again on what is turning out to be a truly remarkable season in Calderdale League 1. Nine rounds out of fourteen have now been played and the configuration of the leading team or teams has changed after no fewer than eight of those nine rounds. The top five teams are still separated by a mere three points. It’s rather like the rats in a barrel story, only in this instance, there will only be one rat left at the end of the struggle… and what a resilient specimen it will be!

To tell the story of round 9 we really must begin with the events from last Wednesday night at Huddersfield as the league leaders hosted Courier ‘A’. In the previous round Huddersfield had shrugged off the challenge of Halifax ‘A’ to maintain their single point lead at the top. This time round they couldn’t maintain their form as a bloodthirsty match ended with five decisive results! Mitchell Burke beat Tony Slinger on board 1 and Peter Hepworth defeated Kevin Winter on board 5 for the home team, however wins for John Morgan, Dave Patrick and Robert Clegg against Dave Keddie, Dave Tooley and Tony Aguirre respectively allowed Courier to re-ignite a title challenge that would almost certainly have been over had they lost. They now sit just two points behind the new league leaders as Huddersfield slip down to second a point behind…

… Todmorden ‘A’ who on the Monday night white-washed a plucky but hapless Hebden Bridge ‘B’ team. Todmorden’s board 3, Andrew Clarkson has very kindly sent us a report on this match along with a couple of annotated games which can be found in the game viewer at the end of this post.

Monday the 20th of January saw Hebden Bridge ‘B’ pay a visit to Todmorden, a match that I can assure you we were not taking lightly. In the previous round of matches Hebden’s ‘B’ team had earned a remarkable draw against their ‘A’ team, while Todmorden ‘A’ had struggled to a 3-2 victory against their own ‘B’ team. Clearly these ‘B’ teams are dangerous animals! We just couldn’t be sure of Hebden’s line up, so preparation was out of the window and improvisation was the recipe for the night.

As proceedings got underway the first notable event was Josh Blinkhorn giving up a pawn to Martyn Hamer on board 1, albeit an isolated Queen’s pawn. Perhaps it was something he was familiar with and had used as an equaliser in the past? Board 2 had Peter Mulleady playing his favourite line of the English Opening against Martin Syrett, and on board 3 I was happy to employ my tried and tested 7.a4… against John Kerrane’s line in the French Winawer variation. Meanwhile Alistair Wright, on board 4, was playing a hypermodern opening as White by delaying the advance of both e and d pawns until move 13! I bet Neil Bamford has not come across that before. Finally on board 5, Rob Tokeley was kicking Mr Crampton’s Queen around the board with gain of development.

Nothing was certain out of the openings despite at least a small plus on every board for Todmorden, so credit to the visitors. However as the evening progressed it was evident that the Hebden players were having to work very hard at their positions while the higher rated Todmorden players took full advantage of their greater calculating powers. Small advantages were accumulated and tactical opportunities seized. Games were won and Hebden were under relentless pressure. I am afraid to say we did not spare the wounded when we scented victory. 5-0 victories are quite rare in the Calderdale League and Todmorden were eager to chalk one up. Martin Syrett was eventually the last man standing, or should I say sitting, and two pawns down in a Rook ending when he threw in the towel.

So despite the 5-0 result I have to pay tribute to the brave Hebden team that came to do battle. They certainly tried to cause us problems but found all five Todmorden players intent on impressing their teammates.

Todmorden have occupied first or second place in the league since the beginning of the season and they’ve been in the top spot for longer than any other team thus far. They’ve also been hugely impressive at home, they haven’t lost a single board with white this season and they haven’t lost a home match since they fell to Hebden Bridge ‘A’ on bonfire night in 2012! If they don’t drop any points on their travels it’s hard to see past them for the title at this point. Their match at home to Huddersfield on the last night of the season could well prove to be decisive, not to mention mountainous for Huddersfield if the trail Tod at that juncture.

So Todmorden ‘A’ are top, Huddersfield second and Courier ‘A’ third. What about the champions? Hebden Bridge ‘A’ have had a poor run by their standards. They lost to Huddersfield and managed only draws against Todmorden ‘B’ and Hebden Bridge ‘B’ in their last three matches. With the title defence looking very shaky, could they find a way back to form at home to the bottom team Brighouse?

In the end they did by that familiar old score line of 3 — 2. One thing we can say for sure is that they won’t win the title on board score if it comes to that! Once again they set off from the blocks like lightening as they advanced to a 2 — 0 lead early on in the evening.

First of all Dave Shapland ran over Ron Grandage after the Brighouse man played the opening too provocatively. Soon afterwards Matthew Parsons had also seen off his opponent in what turned out to be the best game of the night. Robert Broadbent found himself in a Grunfeld-type position and either didn’t know the best way to proceed or dubiously elected to go ‘off-beat’ by trying to duck into a Grunfeld-Slav hybrid. Matthew pounced on his chance with great energy pushing his h-pawn right up the board to open that file and then sacrificing material to open up the Black king. Computer analysis shows that Robert did miss chances to equalise but he was under great pressure and failed to seize his main chance. After that Matthew needed only to apply a few further deft strokes and it was check mate (which Robert generously allowed his adversary to deliver).

It looked once again like Hebden Bridge were cruising. Unfortunately, in a familiar story for this season, the momentum was lost and the longer the remaining games continued the less likely it appeared Hebden would find the elusive extra point they needed for the win. Nick Sykes blundered a pawn in the opening against Paul Whitehouse on board 4. He managed to whip up some compensation for it but Paul slowly and securely defused the pressure and then pressed forward. Try as he did, Nick couldn’t find a way to hold the game and eventually Paul queened a pawn and found the right method to round up Nick’s remaining, far-advanced, past pawn.

Salvation came in the form of Pete Leonard who once again essayed his Closed Sicilian Variation against Bruce Bendall. The opening seems to suit Pete’s style. He certainly looked comfortable against Bruce although the win required patience and concentration to the last.

This just left Andy Leatherbarrow and Nick Hudson to finish up the match on board 3. Andy seemed to have the upper hand and Nick was in dreadful time-trouble but he managed to turn the tables on the Hebden player and stole the win at the very end of the night to leave the match score at 3 — 2.

So, Hebden close the gap between themselves and the top spot to two points. They are still in the hunt but must now face up to the critical spell in their season as their next four games are Courier away, Todmorden ‘A’ away, Halifax ‘A’ at home and Huddersfield away. They will likely as not need to win at least three of these matches to have any chance of retaining the title. It’s a very tall order but here’s a statistic to give them some hope. Todmorden may be the “masters of the home fixture” but Hebden ‘A’ are the “away players” of Calderdale League 1. Their last away defeat was at Belgrave in March 2012! They’ll need that kind of form again in the coming weeks.

This just leaves us to report on Halifax’s win against Todmorden ‘B’ by the handy margin of 4½ — ½. They might well have been considered out of contention after their last defeat at Huddersfield but now they are just about still in it three points behind Tod. However, with five rounds to go they simply can’t afford any more slip ups, they’ll probably need four or five wins from those fixtures to be in with a chance.