In part two of my review of 2014 we’ll cover summer and Autumn period. With the Calderdale and Yorkshire league seasons completed in May you might have been forgiven for thinking that nothing much would have been going on in the summer but you’d be quite wrong. 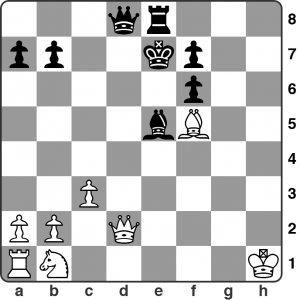 July: Syrett vs. Shapland – Hebden Bridge Summer Rapidplay. Black to play. With both players in dreadful time trouble White has understandably just offered simplifications with 28.Qd2. How should Black respond? Solution in the game viewer at the end of this post.

Pete Leonard, Andy Leatherbarrow and Dave Shapland all took part in the Yorkshire under 160 team’s superb run to the final of the county championships. In May Dave and Pete travelled to Penrith to play their part in the demolition of Cumbria in the qualifiers. Andy joined them for the quarter final match against Essex which saw the Yorkshiremen avenge their defeat to the same side in the 2013 final. Dave missed the semi-final win against Cambridgeshire and, unfortunately, Pete was unavailable for the final which was played, along with all the other finals, in Warwick in July.

Both Andy and Dave won their games in the final against Middlesex as Yorkshire struggled on the top eight boards but swept their opponents aside on the lower boards where they scored 7/8!

Yorkshire also won the ‘Open’ section of the County Championships when they thrashed another Middlesex team 11½ – 4½. This included a fine win by HebdenBridge’s occasional guest star Matty Webb. This was just one step on the road to a fabulously successful season for Matty. 2014 saw his rating shoot up and he currently occupies the number 3 spot on the Yorkshire Chess Association rating list. 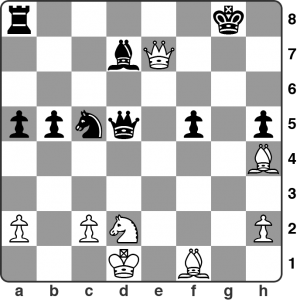 September: Bak vs. Eagleton – Calderdale League. White to play. White is the exchange down but he has the initiative. Can you see a way to take advantage?

During the summer the club held two rapidplay competitions in which particpants played each other twice with 30 minutes each on the clock. The ‘A’ group was won by Matthew Parsons who was dominant through out and only lost one game to Dave Shapland. There were a good number of highly entertaining games played in the top section.

As preparations for the new league season began some warm up activity was organised to get players back into the swing of things. First of all six of our members travelled to Keighley chess club to play in a return friendly match to the one played at the Trades Club in 2013. Keighley took revenage for their away defeat the previous year by winning this match 4 — 2. Neil Bamford was the only Hebden player to win but both John Kerrane and Nick Sykes took creditable draws.

The following week Matty Webb agreed to play a simultaneous match against all-comers at the Trades Club. Ten players took up the challenge in which Matty generously (or foolishly perhaps!) agreed to play all the games sat standard Calderdale League time limits. He still scored 9 out of 10 conceding draws to Matthew Parsons and Martin Syrett and losing just one to Danny Crampton who sneakily played at high speed and survived long enough to win the game on time when Matty didn’t notice what he was up to.

Then came the Club Lightning competition which was won in fine style by John Allan with a score of 5½/6. Pete Leonard and Dave Shapland trailled on a point and a half behind him on 4 and John Kerrane and Nick Sykes were next on 3½. 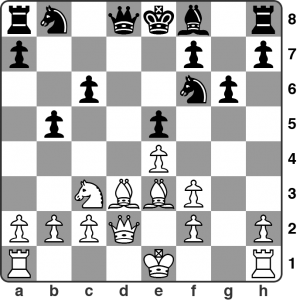 October: Leonard vs. Morgan – Calderdale League. White to play. With such a lead in development it’s no surprise to find White can proceed in sacrificial style. What’s his best continuation?

After the warm ups came the serious business of the new league season. The club decided to field three teams across the two leagues this year as our pool of willing league participants continued to dwindle. Most significantly Matthew Parsons made the decision to return to representing Huddersfield after a four year stint playing in the HebdenBridge ‘A’ team. That loss was keenly felt but the ‘A’ team began the season pretty solidly as they almost took advantage of Huddersfield arriving at the Trades Club with only four players in the first round and then beat Courier ‘A’ in fine style in round 2. Andy Bak on board 1, Pete Leonard on 2 and Nick Sykes on 4 all played brilliantly to beat strong opponents.

Subsequently it’s been a bit of a mixed bag for the ‘A’s as they followed their surprise win over Courier with a surprise defeat to Belgrave but then beat both Brighouse and Todmorden ‘B’ before succumbing to a very strong Halifax ‘A’ team despite drawing on the top two boards. 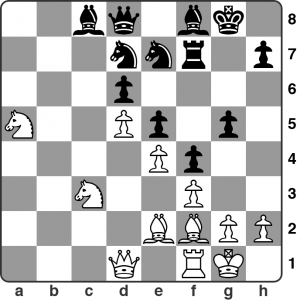 October: Sykes vs. Clegg – Calderdale League. White to play. How did Nick cap a really fine thematic game from this position?

League 1 is warming up to be another fascinating contest this season as the reigning champions Halifax ‘A’ have recovered from a slow start to get themselves back in contention whilst Huddersfield started tremendously but have subsequently slipped up to allow their rivals to close up on them. Todmorden ‘A’ and Halifax look like the main contenders although Courier aren’t out of the race just yet.

In league 2 both the ‘B’ and ‘C’ teams have found life difficult. League 2 has just six teams in it this year and our teams occupy the 4th and 5th places at present with one win and one draw a piece. Danny Crampton has taken up the captaincy of the ‘B’ team and after beating Courier ‘B’ in the first round his side have managed only a draw against Halifax ‘C’ in the subsequent three matches.

Meanwhile John Kerrane’s ‘C’ team have performed identically to pick up the same number of match points and they trial their ‘B’ team colleagues only on game points at the moment.

Halifax ‘B’ are the dominant force in League 2 thus far and they already have a decent lead over Todmorden ‘C’ and Halifax ‘C’. The two Hebden sides are still close enough to challenge for second place here.

Calderdale ‘A’ are maintaining the same position they finished in last year by occupying the middle of the Division 1 table after 5 rounds. In League 2, Calderdale ‘B’ have started in rather lacklustre fashion with one win, one draw and three defeats so far. They’ll need to up their game to be sure of avoiding relegation this season. Hebden regulars Andy Leatherbarrow, John Allan and Martin Syrett look poised to assist in this task with John continuing his excellent form of last season in this competition. 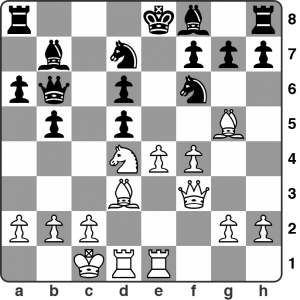 December: Webb vs. Guramishvili, London Chess Classic FIDE Open. It’s White to play. He’s sacrificed a piece on d5 to open the e-file. How should he proceed to capitalise on that. This is straight out of the opening book so anyone wanting to play the Najdorf needs to know this idea!

In December I was fortunate to have the opportunity to visit the London Chess Classic and see the opening round of the main competition. Whilst I was there I was surprised but very pleased to get the opportunity to meet one of my chess heroes, Garry Kasparov! The former world champion was there for a book signing and I wasn’t going to miss out on that opportunity. Of course I spent the whole time in the queue trying to think of something meaningful to say to him and then pretty much stuffed it up when I got to the front of the queue. Never mind, I now own a signed copy of the second part of his chess biography ‘Kasparov on Kasparov’ which I can certainly recommend to anyone who’s interested in some literature on his career.

In the end I only spent a little bit of time inside the chess classic itself because I predominantly wanted to follow Matty Webb’s game in the FIDE Open that was taking place alongside. To my great delight he played a game in a theoretical line of the French that I play myself against a Grandmaster in the form of Neil McDonald. It was an interesting game that ended in a draw.

Matty played extremely well in the tournament and I’ve included a game he won against WGM Sopiko Guramishvili in round 2. Anyone who watched the recent World Chess Championship match will know that Sopiko was co-commentator with Peter Svidler so this was a high-profile scalp for Matty to take.

The full games, some with commentary, are featured in the game viewer below so that you can find the solutions to the positions given in the article as well.