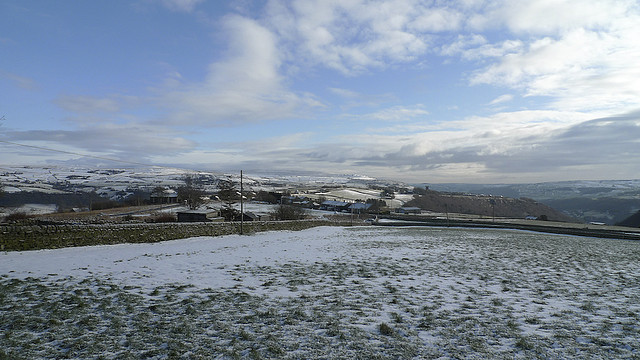 Despite the wintery weather over the last few weeks there has been plenty of bright chess played by Hebden Bridge’s chess teams. This image is used under Creative Commons terms and sourced from Jan Scott Nelson’s Flickr photo stream

What with the various postponed fixtures around the Christmas and New Year period it’s no surprise to see that there has been a flurry of activity in the Calderdale League over the last couple of weeks. Hebden Bridge ‘A’ hosted the league leaders Todmorden ‘A’ last Monday and then this Monday gone found themselves at the Belgrave Social Club for a match against Courier ‘A’.

We’ll com back to the ‘A’ team in a moment but first let’s cover the League 2 results from the Trades Club last Monday where, for the first time in a long time all three Hebden teams were playing at the same time.

Danny Crampton’s Hebden Bridge ‘B’ team have looked like they mean business this season and are contending for the second promotion spot  with Todmorden ‘C’ in a title race that already looks to be over as Halifax ‘B’ top the table by 5 points from these other two. Crampton’s barmy army faced the bottom team in the division, Courier ‘B’, for a match that looked on paper like it would be straight forward for the hosts.

It didn’t turn out that way when each team fielded 4 players and agreed to default a board each rather than pairing up the two ‘spare’ players. Therefore the match became essentially a three board affair and Hebden were right up against it when Neil Bamford went down to Paul Jacobs in an entertaining game. This meant that both John Allan on board 1 and Martin Syrett on board 2 needed to beat Dave Colledge and John Smith respectively to win the match. This they duly did but not without adventure.

Meanwhile John Kerrane’s ‘development’ team were paired against Todmorden ’C’ and found it to be a tough assignment. Hebden defaulted their fourth board and fielded two of their juniors in the line up against a squad of seasoned Todmorden veterans. The result was a ½ — 4½ thrashing for the home team with just captain Kerrane saving their dignity with a draw against his old foe Dave Milton.

Various games from these two League 2 encounters are posted in the game viewer at the end of this article. All of this means that Courier ‘B’ stay rooted to the bottom of the table with Hebden ‘C’ just above them. At the top Hebden ‘B’ and Todmorden ‘C’ are still level on points and very close on board count in second and third positions.

Now, to the League 1 action. Hebden Bridge ‘A’ entered these latest fixtures with very little expectation of scoring any points for both Todmorden ‘A’ and Courier ‘A’ out graded them on most if not all boards. However, Hebden are capable of pulling off results against the very best sides in the division on their red letter days and they actually had two of these on the last two Mondays as they first took down the League leaders’ strongest possible line up and then dispatched Courier in a storm of decisive games.

Let’s deal with Todmorden’s visit first. They arrived with Messrs Hamer, Mulleady, Cook, Gil Fresno and Clarkson all of whom sported ratings of 170 or above in the December Yorkshire ratings. This must be one of the most formidable line ups there has been for many a long year in the Calderdale League and Hebden were out rated by 20 points or more on each of the bottom four boards!

Unfortunately for them Todmorden ‘A’ have a pretty awful record at Hebden and this occasion was not to prove any happier for them. The first game to finish was the board 1 match up between Andy Bak and Martin Hamer. On paper this was the tightest match up of the five boards with Andy being rated only a little lower than Martin. Andy met the Alekhine’s Defence in a calm and positional fashion aiming to shut down Blacks active chances and slowly improve his position. He did this very successfully, put Martin under pressure and duly converted the full point when his opponent made a tactical error.

The scores were soon level as Andrew Clarkson overturned Andy Leatherbarrow on board 5. Andy essayed a classical line against Andrew’s Pirc and seemed to be caught off guard by his opponent’s slightly offbeat response. He ended up losing on time in a pretty terrible position. Anyone wanting to play in this way against Andrew in the future will need to look carefully at what happened here to find improvements for White.

The next two games to finish concluded one after the other. First of all Nick Sykes pounced on a tactical blunder to compel instant resignation from Carlos Gil Fresno. In fairness Nick had already succeeded in obtaining a very comfortable position against Black’s Sicilian Sveshnikov opening.

Directly after this Todmorden were level again as Phil Cook dispatched Dave Shapland on board 3. This game went wrong for Dave very early on as Phil chose an interesting and offbeat line of the Two Knights Defence. Dave played logically but in this instance that wasn’t enough and when he was tempted into the speculative sacrifice of a piece for two pawns and an exposed Black king it soon turned out that Black was more than comfortable defending himself. Once the players had reached a simplified ending it became all too easy for Black to convert his advantage.

This meant that the match came down to the battle of the Pete’s (Leonard and Mulleady) on board 2. This game was decided by a double time-crisis. Right before time control Pete Mulleady seemed in very grave danger in a still complicated position. However, Pete Leonard was the one who overlooked a tactic when he missed a discovery on his queen that lost her majesty for a rook and bishop. This should have been enough for Todmorden’s Pete to convert the game after the time control but Leonard’s two bishops and rook were extremely irritating against the Black queen and knight. Mulleady got himself into time trouble for a second time and this time his opponent did capitalise as Black stumbled into a mating net.

And so the match was decided only at the very end of a compelling and tense evening with Hebden edging it by the odd point in five decisive encounters. Here’s the match scorecard:

All five games can be found in the game viewer at the end of this post. I promise you won’t fail to be entertained and/or interested by any of them!

Now let me bring you completely up to date with this week’s action. On Monday night Hebden Bridge ‘A’ returned to battle again with a trip to face Courier ‘A’ in Halifax. Despite the previous week’s heroic effort none of the side expected anything other than a very tough match against another team who matched or bettered them rating-wise across all five boards.

If anything the Hebden men were on even more inspired form as the demolished their opponents convincingly despite losing the first game of the night to finish. This was the board 2 match up between the two team captains Dave Patrick and Pete Leonard. This time Pete was on the losing side having been the hero the week previously. This game would make and excellent companion to the Bak vs. Hamer game mentioned above for again White opted for a slow positional squeeze against the Alekhine Defence and again Black struggled to cope and was ground down.

It looked like it was going to be a long hard night for the visitors but that was when everything changed. First of all Andy Bak beat Tony Slinger on board 1 in a King’s Indian come Benko Gambit that got very sharp indeed at the end . However, once it became clear White had nothing to show for his efforts down the h-file Black was simply much better.

Not long after this Andy Leatherbarrow converted the material advantage he accrued against Dave Colledge fairly early in the game as he navigated through all the tricks and complications Dave could throw at him to put Hebden in the lead.

Nick Sykes won a splendid and extremely interesting battle against John Cawston on board 4. The game started out as a rather unfashionable Tarrasch Variation but perhaps players should look at this variation again for it was once a favourite of Garry Kasparov and contains more than a drop of poison. Nick sacrificed the exchange in thematic fashion and then demonstrated again that he is in excellent form this season by winning the ensuing ending which looked vey uncomfortable for his opponent.

This time the match was decided before the last game finished but Hebden won it all the same. Dave Shapland opted for a reputable and solid set up against John Morgan’s English Opening and the position developed along the lines of a reversed Classical Dragon. This system is very hard for White to break down and as the tension in the centre built John correctly opted to force simplifications that seemd to guarantee Black equal play.

However, the double rook, bishop and knight end game that emerged was very complicated and both players started to consume time on the clock as they tried to navigate accurately through the tactics. Dave thought he’d found a cunning way to set up a pin on the c-file that would net him a piece. John saw the idea and believed it but overlooked a couple of ways it could have been side-stepped when he instead opted to give up his knight for two pawns.

Dave now had two rooks and a knight against John’s two rooks and with the time control reached he had plenty of breathing space to improve his position and tie John up. He still managed to make heavy weather of it at the end and it was only when John, under pressure on the clock, made a tactical error that Dave was able to cause devastation with his knight and round up a splendid performance for the team on the night.

Again, there are annotated games form this match in the game viewer below. I’ll provide a full update on the league positions in the first division next week as there is another round of action on Monday when Hebden Bridge ‘A’ will once again be at home, this time to Belgrave.

10 Responses to “A bright start to the new year!”