The Calderdale Evening Chess League first division title race took yet another twist as Hebden Bridge ‘A’, last season’s champions, moved into the top spot while their main rivals failed to secure much needed victories. 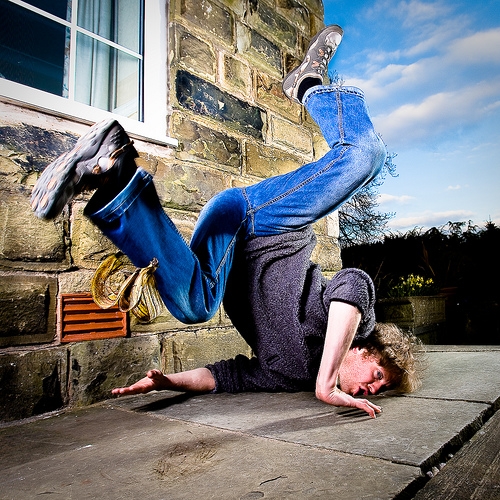 Brighouse, Belgrave and Todmorden ‘B’ have all been banana skins for the title challengers to slip on over the last few rounds. This image is used under Creative Commons and sourced from purplemattfish’s Flickr photstream

At the start of the round Hebden were one point behind the league leaders Huddersfield and on the same score as Halifax ‘A’. Two points behind them, last year’s runners up, Todmorden ‘A’ were lurking and the ever dangerous Courier ‘A’ were a further point behind. Huddersfield dominated the early stages of this year’s proceedings as they swept to a perfect six wins from their first six matches. Then, just before Christmas, Halifax managed to arrest their momentum by beating them at Halifax. Now the wheels seem to be off the Huddersfield championship band wagon all-together. First they lost to Hebden at home straight after Christmas then they drew at home to Belgrave and on Monday they lost at Todmorden ‘A’ to a team who absolutely had to win to keep their own slim chances of taking the title alive. Todmorden are particularly powerful at home and a win by Martin Hamer against Mitchell Burke on board 1 was enough to secure the match as all other boards were drawn.

Whilst this drama unfolded Halifax were hosting the other Todmorden team at the Lee Mount Club. Todmorden ‘B’ are firmly rooted to the bottom of the table but that fact masks the simple truth that they have been very competitive in many of their matches. Halifax only just pipped them in the reverse fixture earlier in the season and on this occasion they couldn’t muster enough to win the match. If Halifax has a weakness it is on their lower boards and Todmorden exposed this expertly. Alastair Wright took a very creditable draw off Bill Somerset on board 1 (only his second drawn game of the season!) and Mike Huett and Bob Pratt secured victories against Carlos Velosa and Adrian Dawson on boards 4 and 5 to leave the match tied.

Of course all of this was unknown to Hebden Bridge ‘A’ who had their own challenge to overcome as they faced up to Belgrave at the Trades Club. Belgrave had been able to draw the reverse fixture at the end of November and they appeared to have strengthened their line up for this match due to the absence of regular members of the team Malcolm Corbett and Mike Barnett. Karim Khan and Sam Scurfield are both rated above those they replaced and on that basis the tie looked fairly balanced at least on paper.

For once Hebden made light work of a tough challenge by taking two wins and a draw from the first three ties to finish. On board 1 Matthew Parsons was on particularly strong form as he despatched Gordon Farrar. Gordon is nothing if not an obdurate opponent but Matthew breezily ventured a positional exchange sacrifice that enabled him to secure long term advantage thanks to the closed nature of the position. He eliminated the bishops and a pair of knights from the board to leave himself with a knight and rook against two rooks. As Matthew himself points out in the commentary to his game (below) the knight dominated both Gordon’s rooks to the extent that Gordon had to return the exchange whereupon the resultant king and pawn ending was a trivial victory for Matthew. This was a very impressive and confident performance from Hebden’s top player.

On board 4 Andy Leatherbarrow took on Belgrave’s Captain, Angel Gonzalez in what transpired to be a fairly insipid Scotch Game. The queens, a pair of knights and a pair of bishops had all disappeared from the board by move ten and, as a result, although Andy was able to generate a considerable spatial advantage he could not prevent further simplification whereupon a draw was the inevitable outcome.

The confidence boost administered by Matthew’s victory seemed to have permeated into other members of the team for, on board 2, Pete Leonard had also ventured a sacrificial attack against Karim Khan. Later analysis (see the game viewer below with commentary by Pete) demonstrated that the sacrifice was not sound but it caused enough practical problems over the board to yield Pete a significant advantage. He established a monster protected passed pawn on f7 that dominated the position and as he forced simplification it became apparent to Karim that further resistance was futile.

That result gave Hebden the draw in hand. Now they needed one more draw to secure the tie. On board 3 their Captain, Dave Shapland, was once more embroiled in a head-spinningly complicated affair with Sam Scurfield. The opening became very unusual when Sam had a momentary mind blank on move four. He thought for twenty minutes and then played a most unorthodox continuation. Dave should probably have been more direct in his attempts to refute this and some resourceful play from Sam brought him right back into the game. The position became dangerously open from Dave’s point of view but he calculated almost everything very accurately and maintained the balance.

I say almost because, at the critical moment in the game, when he had a choice between two queen moves he chose the wrong one and over looked a clever intermezzo that allowed Sam to take the initiative once more. It appeared that Dave would lose a piece but he’d seen he could get it back. Sam’s remaining knight was trapped. Unfortunately, in a final twist, Sam engineered a means of winning two pawns for the knight and in a simple end game that was enough to force Dave’s resignation.

That left perennial late finisher Nick Sykes to complete the victory for Hebden on board 5. Unusually for Nick he had made an elementary mistake in the opening and lost a pawn and two tempi in the early stages. However, he kept his head and slowly reduced his arrears against Belgrave’s Les Johnson. By the end of the evening Nick had won back his pawn and even gained a further pawn’s advantage. However, with the heavy pieces still on the board this might not have been enough to win the game and he sensibly offered Les the draw his team needed to take the match.

The final score then was 3 — 2 to Hebden. Here are the individual results: