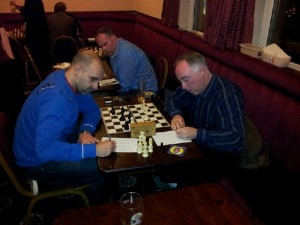 It was a third consecutive week of Calderdale League chess for Hebden Bridge ‘A’ on Monday night at the Trades Club as they played hosts to Belgrave from Halifax.

Having lost three of their six matches played before Christmas Hebden have gone on a brilliant run since the Christmas break starting out with wins over Todmorden ‘A’ and Courier ‘A’. Both those teams were higher rated on average than they were. This time however they knew that the boot would be on the other foot as Belgrave’s regular line up was slightly weaker than their own. Of course, having lost to Belgrave away earlier in the season Hebden were taking absolutely nothing for granted and when the visitors turned up with seven players (two of whom had never played for them before!) the home team knew they were in for a tough night.

Once Belgrave had decided on who was actually going to sit down and play it became apparent that the match would probably be decided on the lower boards where Hebden held modest rating advantages. However, all of the match ups were close enough to indicate that a tense night was in prospect. And so it turned out to be as all five games were contested fiercely.

The board two encounter was the first to finish. Here, Dave Shapland secured himself a decent advantage against Gordon Farrar’s Philidor’s Defence which developed idiosyncratically when Gordon played the unusual 4…g6!? Dave elected to play the position a little bit like a Yugoslav Attack and castled on the opposite side of the board to Gordon. Ultimately all but the heavy pieces were traded and Dave opened the h-file. It looked at various stages like he should have cashed his chips and won Gordon’s backward d-pawn but Dave didn’t think this would give him a clear enough edge in the rook ending and engine analysis suggests he may have been right. Dave tried to set up a diabolic trap but when Gordon side-stepped that a draw was the inevitable result.

At that point in the night it was very much unclear as to whether or not this first result would be a good one for Hebden or not because all the other games were very close fought and could conceivably have gone either way.

That all changed when, on board 5, Martin Syrett concluded a vicious attack on Mike Barnett’s king by compelling his opponent to give up his queen for knight and bishop. Then in the scramble to reach the time control Mike made an error that allowed a fork and with the loss of one of his two pieces he resigned. Hebden had the lead.

Next up Andy Leatherbarrow bagged his second win in succession by converting a minor piece ending against Angel Gonzalez. These two had swapped off the queen’s very early in the game but the resultant queen less middles game was complicated and Andy found himself in his habitual time crisis which was compounded by Angel seemingly trying to blitz him. But Andy made the time control with a small advantage which he converted when Angel walked his knight into a pin. By this time Andy was down to his last 5 minutes but he just had enough time to convert the endgame for Hebden’s second win of the night.

It was only fitting that Nick ‘Syko’ Sykes should score the winning point for his team on board 3. He’s in a real purple patch at the moment and has now won all three of his games for Hebden in 2015. He was facing Karim Khan, a man who is himself having a really strong season and has claimed several scalps, including Nick’s Hebden teammate Dave Shapland, in the reverse fixture last Autumn.

This could have been a banana skin for Nick but if it was he never looked in danger of slipping up as he subjected Karim to the ‘Spanish Torture’. Karim just could find an active plan and Nick seemed to have all the time in the world to build up a huge attack on the Black king which finally crashed through to give White victory.

Hebden had won the match but there was still one board playing. Here Belgrave’s new recruit, Ian Hunter, was up against Hebden’s Captain Pete Leonard. It looked like Pete had landed himself in trouble straight out of the opening as Ian gained a very comfortable position. In this game too the clock situation was very tense as the players embroiled themselves in a very complicated rook and two minor pieces ending. Peter was subjected to intense pressure but seemed to have built himself a fortress with his knight on g1 and his rook holding the position together on the second rank while Ian’s bishop had no targets because Pete had pawns on the opposite colour squares. However, it was one of those positions where Ian could manoeuvre almost endlessly and eventually Pete ran out of time at the same moment that he made a mistake that seemed to have allowed Ian in. this was an unfortunate outcome for Pete who had defended himself staunchly.

Elsewhere this week both the title race and the relegation battle heated up as giants tumbled.

In Todmorden the ‘A’ team continued their yo-yo form with a surprising defeat at the hands of Brighouse. The hosts had rightly been concerned about fielding a slightly weaker team than usual last week against a full strength Halifax ‘A’ but they had won that match by a four point margin. What could go wrong against the lowly Brighouse? As it turned out plenty. At Halifax Tod’s top three boards had powered them to victory. This time out they could only muster two draws and one win on board two for Carlos Gil-Fresno against Robert Broadbent. That opened the door for Brighouse’s bottom boards to spring a massive surprise as they won on both 4 and 5 to claim the match 2 — 3. This result still leaves Todmorden ‘A’ top of the league on 14 points but now it’s only on board count. The result also propels Brighouse 2 points clear of the relegation scrap and means that Belgrave have a good deal of work to do to reel them in as the two teams have now met twice and drawn twice.

Also at Todmorden, their ‘B’ team took on Courier ‘A’ who recovered from their defeat at the hands of Hebden Bridge last week by soundly thrashing their hosts 4½ — ½. They move to 12 points, within touching distance of the leaders. Tod ‘B’ despite being competitive in every match are rock bottom.

Undoubtedly the most mouth-watering and certainly the most critical tie of the week in terms of the title race was played out last night at Huddersfield between the hosts and the title holders Halifax ‘A’. The visitors knew that this was a must win encounter as victory for Huddersfield would place them 6 points clear of the champions — too much ground to make up. However, Halifax bounced back from the disappointment of losing to Todmorden last week as they walloped the home team 1 – 4. Only Matthew Parsons on board 1 could manage a win against Bill Somerset. Huddersfield’s storming start to the season now seems like a distant memory and their line up seems to have got weaker, not stronger as the season has worn on.

All of this means that ther are no five teams within 2 points of each other at the top of the table. We now have two weeks off before the next round of fixtures sees Courier ‘A’ hosting Halifax and Huddersfield playing at home against Todmorden ‘A’. Hebden host Brighouse and they certainly won’t be taking them lightly after their triumph this week. The title race is well and truly on!