It’s time for another Calderdale League update readers. A week last Monday (the 28th), Hebden Bridge A played away to Belgrave in Halifax. Meanwhile, at the same venue our comrades in the B team were playing Courier A, who we had beaten in our first match of the season. (I may well post separately on this match as I saw one very interesting game that deserves some coverage.)

The A team made heavy work (although we were all playing black) of defeating Belgrave 3.5-1.5 with all the games being tightly contested for a long period of the evening. In the end we won on board 1 and board 5 and drew the other three games. What is pleasing to see so far is that everyone in the team has made a good and pretty much equal contribution to our first two successes. Boards 1,2,3 and 5 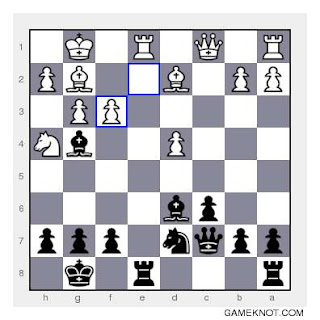 have all scored 1.5 from 2 matches and board 4 has made two draws.

My own game on board 3 was drawn. To tell the truth, I should have won it fairly comfortably. I chose to develop sensibly against a Reti system which transposed into a Catalan/Slav type position when white elected to play d4 instead of e3 or b3. Having succeeded in gaining a fairly comfortable positional advantage (see diagram on the left) I managed to avoid a tempting piece sacrifice after a long think.

This position (my 15th move) was critical for me. I had been looking for ways to get at white’s king and one idea I had looked at was a piece sacrifice starting with 15….Bxg3 and following 16.hxg3 up with 16….Qxg3 17.fxg4 Qxh4 when the white king is exposed and I should pick up a third pawn (g4 or d4) for my piece. I tried to calculate the variations that might arise after Qxh4 but the plausible continuations were too numerous to manage. In fact, during analysis after the game my computer found a tactical flaw in my plan which I hadn’t uncovered which is 18.Rxe8+! Rxe8 19.Be1 protecting the knight on h4 and maintaining a two piece advantage! I’m can’t be sure my opponent would have found this but I’m glad I didn’t give him the opportunity.

Ultimately I realised that if I played the sacrifice I would have to rely on my gut instinct and a positional justification. After further reflection I decided that in this case the positional justification wasn’t strong as I already had a tangible positional advantage. White’s structure is badly damaged and his pieces are not all placed on good squares. I therefore resolved to try and find a different method of capitalising on this even though retreating the bishop on g4 would give white some time to re-group.

I’m sure that playing 15….Be6 was the right choice here and my opponent said after the game that he would have been happy if I’d played 15…Bxg3. We very quickly looked at the position that would have arisen after the short forcing sequence and I wasn’t wild about the resultant possibilities.

Despite the fact that this crucial decision took me quite a long time to make I’m glad that I reached the right conclusion. Often in the past I have found that I am unable to make objective decisions about retreating pieces from attacking outposts if I believe that an alternative direct method is available to me, no matter how risky. I need to be more aware of this tendency in my play and try to avoid making decisions based purely on my desire to attack and maintain the initiative.

Having selected the right continuation here I managed to maintain some control of the game and picked up a pawn in the middle game and another one as we transposed to the end game. The diagram below picks up the stor of the endgame.

I should take some comfort from having made the correct decisions at key points in the opening and middle game but it was disappointing to have missed out on a win when it was staring me in the face on a few occasions.