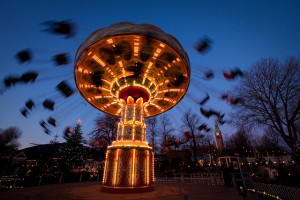 Chess, like life, has its ups and downs. Hebden Bridge ‘A’s form has been inconsistent this season as their recent results testify. this image is used under Creative Commons terms and sourced from Stignygaard’s Flickr photostream

Last Monday saw the completion of the League 2 season with the destination of the title race all but decided. Halifax ‘C’ were two points clear of Hebden Bridge ‘B’ and faced Hebden Bridge ‘C’ at the Trades Club in their last match. Hebden’s juniors have yet to win a match this season and seem unlikely to start now but they have been improving and have taken highly improbable match wins in the past (who can forget a memorable home win against Belgrave two years ago?) Meanwhile Hebden ‘B’ were also due to play at home against Courier.

We’ll report on the outcome of League 2 next week. In the meantime, the rest of this report will be dedicated to recent League 1 action with an update on the last two rounds of fixtures.

On the 21st of March, last year’s Champions and this season’s league leaders Todmorden ‘A’ pulverised an already relegated Brighouse team 4½ — ½. Only Brighouse’s Robert Broadbent on board 2 could put up any sort of resistance as he drew with Phil Cook.
The battle between Todmorden ‘B’ and Belgrave also took place at the Todmorden Working Men’s Club. This was an altogether more tense affair with Belgrave taking the only decisive game of the match when Ian Hunter took down Neil Suttie on board 1. The rest of the games were drawn.

While this was going on, second placed Halifax ‘A’ were maintaining their dogged pursuit of Tod ‘A’ with a win over Huddersfield at home. Stuart Westmorland pilfered a victory on board 4 for the visitors and Dave Tooley drew with John Morgan on board 2. However, the rest of a moderately understrength Halifax team were too good for their opponents and won their games to seal the victory.
The second match hosted by Halifax Chess Club threw up one of the surprise results of the season as Halifax ‘B’ defeated Hebden Bridge ‘A’ for only their second won of the season. Sure Hebden were under strength without the likes of Pete Leonard and Andy Leatherbarrow but they still out-rated their opponents on every board and should have won the match.

Indeed, the evening began well enough when Neil Bamford defeated Barry Wadsworth in an exciting game on board 5. Sadly, that was the last full point Hebden were going to score that evening as the rest of the team were collectively and individually insipid. On board 1, Andy Bak blundered a piece so early on in the game that several observers thought he might have played a pre-prepared sacrifice in the opening. He hadn’t and Richard Porter is not the sort of fellow to give back a piece. The match score was soon level.

On board 3, Nick Sykes managed to get absolutely nothing at all out of the opening against a well prepared opponent in Vivienne Webster. Try as he might, Nick couldn’t find a way to unbalance the position and eventually acquiesced to a draw. It was the same result on board 4 too but the means by which it was achieved was rather different. Hebden’s Martin Syrett pressed hard and appeared to be winning his endgame against Ray Cully, but his resourceful opponent found a passive defence that was obdurate enough to stop Martin in his tracks and another draw left the scores level at 2 each.

This left stand in Captain Dave Shapland in the enviable position of needing to win against Scott Gornall on board 2. Patiently Dave crafted out a position that appeared to be highly advantageous, but then slowly but surely he relaxed his strangle hold and then managed to relinquish all his positional trumps to his opponent. Scott was not as profligate as Dave and converted his advantage smoothly to seal an excellent win for Halifax and a chastening evening for Hebden who have now lost 3 matches to opponents positioned below them in the league this season.

Two weeks later the League 1 teams reconvened for their penultimate round of fixtures. This time we’ll start with Hebden Bridge ‘A’ who went on the road to bottom team Brighouse. These two sides have a history of playing out some pretty brutal battles where all five games have a decisive result. On this occasion it was no different. What was perhaps a little surprising was how easy it was for an understrength Hebden team to defeat their hosts who, though under full strength themselves, nevertheless had their top players out on the first two boards.

Without Pete Leonard again and also Andy Bak, Hebden players were all forced to take a step up as Neil Bamford was once again drafted in on board 5. For the second match in a row Neil was the first to finish and did so with a win.

The remaining four games all lasted much longer and saw tough battles played out. Martin Syrett was the next to finish his game as he defeated the home side’s latest recruit Chris Lund with his trade mark Scandinavian Defence.

Not long after that the home side pulled a point back as Robert Broadbent somehow survived a huge attack from Nick Sykes to win his game. Nick was dejected to find afterwards that he had missed a number of clear cut winning opportunities but he has generously sent us his game for publication which is an entertaining one despite the outcome for him.

The last two games to finish ran almost to the very end of the evening’s play. On board 1 Dave Shapland finally overcame the determined resistance of Dennis Breen to put his Calderdale season back on track after a run of four successive defeats. The opening was an Open Spanish which Dave has an good record with but he overlooked an excellent opportunity to take advantage of an inaccuracy played by Dennis early in the game and then got into serious hot water.

Fortunately, Dennis then returned the favour in a complicated position and as the game simplified Dave found himself in an ending in which he had the bishop pair and a far advanced, isolated White d-pawn to target. Once he’d picked that up it was a matter of finding the right technique to put Dennis away. Endgame technique is not something that Dave is renowned for but on this occasion he was up to the task as he engineered further simplifications to leave himself with two connected passed pawns and a rook against Dennis’s loan rook. Finally, Dave converted for an excellent win against a strong opponent.

That just left Andy Leatherbarrow to complete the scoring for the visitors by beating Ron Grandage at the very end of the evening. This one really was a grind but finally, with both players low on time, Ron missed a tactic that gave Andy the exchange and the rest was easy.

So, Hebden completed a fine away victory following on from the disappointment of losing at Halifax ‘B’ in the previous fixture. Their inconsistency has really been the story of their season. The individual scores were:

Elsewhere in the league Halifax once again maintained the pressure on Todmorden ‘A’ with another victory this time away at Belgrave by 1 — 4. However, they were to be disappointed on Wednesday night when, at the eleventh hour, Huddersfield defaulted all five boards to Todmorden in a fixture that represented the last genuine banana skin for Tod this season. This default pretty much hands back-to-back titles to Tod who would probably need to lose both their final round match at home to Belgrave as well as their match in hand against Halifax ‘B’ for Halifax to have any chance of snatching the crown from them.

The other match played on Monday the 4th was between Todmorden ‘B’ and Halifax ‘B’. Continuing on from their fine home win against Hebden Bridge the visitors won again by a score of 2 — 3. This result means that Todmorden ‘B’ are not quite safe from the threat of relegation because they are only two points ahead of Halifax ‘B’ now. Both teams have one postponed fixture to play which means that Halifax ‘B’ will end the season playing first Brighouse at home and then Todmorden ‘A’ away whilst Todmorden ‘B’ play ‘Halifax ‘A’ away and then Huddersfield at home. Based on current form you’d have to say that Halifax ‘B’ stand a decent chance of staying up. We’ll find out over the next couple of weeks.

3 Responses to “Swings and Roundabouts”