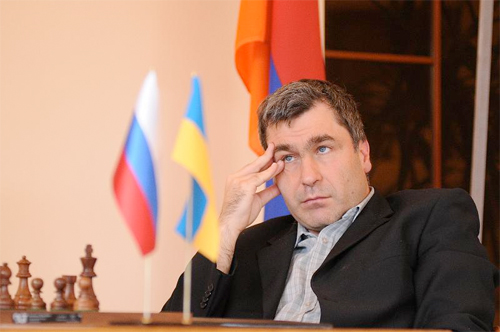 Vassily Ivanchuk looks at anything but the board!

Q – How do we know that Neanderthal Man played blindfold chess?
A – Because in excavations of their sites no chessboards or pieces have been found.”

It’s an old and rather cheesy joke but don’t let that hide the essential truth that it exploits. The physical manifestation of the game of chess (the board and pieces) only exists to help us players visualise the moves. Once you have learned chess notation and grasped of the rules you can play the game in your head. That virtually none of us practice this is an indication of how difficult it is to do. If you’ve never tried it I recommend you give it a go. It is mind bogglingly difficult! However, one skill that, throughout history, sets aside the very best chess players from us mere mortals is their ability to do this very thing.

I recently came across a very interesting and very comprehensive post by HeinzK on his Chess Plaza blog called “The big comparison” in which he associates this game we play with lots and lots of other aspects of life. It is a post which is by turns funny, philosophical, insightful and poetic. It is also full of links to other related blog posts and stories and I followed one about super Grand Master Vassily Ivanchuk which looked interesting. I ended up reading a very nice little interview conducted with him shortly after he had won the Gibraltar Chess Festival in February of this year. One answer he gave tickled me in particular and it was also the answer that had grabbed HeinzK’s attention. Ivanchuk was asked how much time he spent on chess (aside from playing in tournaments) and he answered:

It’s hard to say, because chess and the way you train for it, is quite unusual. For example it’s not even obligatory to sit at a computer, or even a chess board. I can also walk in the park and analyse some important position in my head. Moreover, it’s by no means certain that working using such a method will have any less effect than if I sit at a computer. It depends much more on getting into a mental state that allows you to discover new ideas.”

“I can walk in the park and analyse some important position in my head.”  Woah! Ivanchuk has a reputation for being a “genius” and also for being, shall we say, one of the game’s more colourful characters. This statement certainly seems to bare that out. So next time you take your dog for a walk and spot a dishevelled looking fellow doing laps of the park and muttering to himself as he gazes somewhere into the far distance, don’t worry, he might appear to be a lunatic but it is probably just Vassily analysing an opening novelty.

The real point I guess, is that this extraordinary ability to visualise games and positions is both a blessing and a curse for the chess professional. On the one hand it helps them develop their astounding powers of calculation and concentration, on the other it means that their minds can never truly be free of the game that dominates their lives. The truth that Ivanchuk reveals by being unable to provide an answer to the interviewer’s question is that lots of his chess is played in his head and so it is impossible to keep track of how much time he spends on it.

I’ve seen it mentioned in several sources that Ivanchuk (and some other players) frequently sit at the board and calculate variations without spending much time actually looking at the pieces themselves. On his blog, Tim KrabbÃ© suggests that this is actually quite a logical way to visualise future positions because “the mental pieces are often on different squares than their wooden counterparts.”

To illustrate this point (in a post that is interestingly titled “The handicap of sight” – scroll down to post number 86) KrabbÃ© references an incident involving Mikhail Tal which is taken from “Psychology in Chess”by Nikolai Krogius. You can see the critical position and notes in the game viewer at the end of this post.

I’d like to end this post on a slightly lighter note. As I read the interview with Vassily Ivanchuk I also remembered that our old friend, Colonel Walter Polhill (RTD), had written an article for The Independent on Sunday in which he referred directly to Ivanchuk’s ability to find brilliant ideas without looking at the board. I am willing to risk prosecution to bring you that article (and the illustrative game which is also in the viewer below) for your amusement.

You can tell great players by their eye movements. An average club player’s eyes dart about hopelessly, never knowing quite where to look for the best move. A Grand Master focuses rapidly on the critical area of the board. It is a rare genius that looks, as Vassily Ivanchuk does for much of the game, at the ceiling. And when he is not perusing the ceiling, he often stares blankly at the audience. His 24th move in this game however, surely came from the ceiling.”