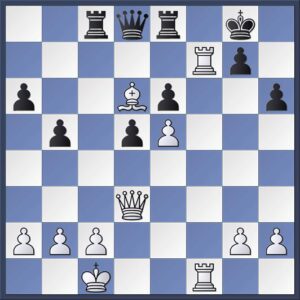 White to play from Blinkhorn vs Woolgar in Round 6 of the 4NCL Online. White is clearly winning here, but how would you chose to finish the game? Josh played 26.Rf8+ and his opponent resigned immediately as 26…Rxf8 27.Rxf8+ Qxf8 28.Bxf8 is all over. However, there is a beautiful forced check mate available here. Can you see it? See the game viewer below for the solution.

A brief hiatus in posting here means that lucky readers will get all the games and updates from two rounds of the 4NCL Online competition where two Hebden Bridge teams are making their debut appearance in division 7 and fighting hard for promotion.

On the 23rd of March round 5 matches took place and the only word that can be used to describe the outcome for Hebden was ‘catastrophe’! Having both lost to the very strong Newport A outfit in consecutive rounds, Hebden 1 and 2 had an identical record of three match wins and one defeat. Keeping pace with the leaders seemed like a decent prospect as both sides drew teams that were, on paper at least, weaker than them. However, the ECF Online rating system is new, there are lots of new and returning players out there and, as we’ve discovered many times since the COVID lockdown came into force,  players online strength does not always reflect their ‘over the board’ strength – whether that be through fair means or nefarious ones! In round 5 Hebden fielded slightly weaker lines ups for their sides but still had an edge on paper over Eagle and Child (who played Hebden 1) and Dundee City C (Hebden 2’s opponents.

What was perhaps most surprising on the night was that it was the lower boards where matters went astray for the teams. Dave Shapland and Pete Leonard lost on boards 3 and 4 respectively for the first team and Chris Marsden and Rob Catlow lost on boards 3 and 4 for the second team. This left their colleagues on the upper boards with it all to do. Josh Blinkhorn won on board 2 for the second team leaving Dave Wedge on board 1 with an uphill task in his match as he was certainly worse very late into the evening. However, the position was complex enough that he was able to hoodwink his opponent and he saved the day for the second team by snatching a win that tied their match with Dundee City C. 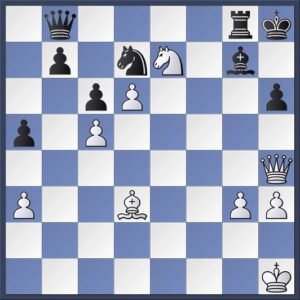 White to play from Vijayakumar vs. Catlow in Round 5 of the 4NCL Online. Can you find the beautiful forced conclusion to this game? Solution in the game viewer below.

Sadly it didn’t quite go so well for the first team. Andrew Clarkson won a smooth positional game on board 2 and Greg Eagleton seemed to be doing well against Martin Carpenter on board 1, the challenge was, his clock situation was poor. In the end, had to settle for a draw and that meant the first team lost by the narrowest possible margin 2.5-1.5.

So, Hebden 2 actually climbed above their first team with their tie, but both teams really needed to win in round 6 last night to keep their promotion hopes alive. Lessons were learned from round 5 and Hebden looked to take no prisoners with their teams selections this time opting for the strongest eight players available. That meant Stavros Pantazopoulos, Phil Cook, Andrew Clarkson and Pete Leonard in the first team squad to face Redbridge All Sorts C and Dave Shapland, David Wedge, John Allan and Josh Blinkhorn in the second team against the wonderfully named Throw in the Tal!

Hebden 1 got off to a flying start as Andrew won his game in very short order when his opponent blundered a piece in the opening. After that though, the evening became a tense and difficult grind as the remaining seven games were extremely competitive. Next to finish was Stavros who was playing Black on board 1 for the first team. His game was very accurately played by both parties although his opponent was playing very, very quickly – suspiciously so perhaps given the incredible level of accuracy. Stavros held his nerve though and, despite running his clock down fairly significantly, he managed to liquidate into a drawn rook and pawn ending and halve the point to keep Hebden 1 a point up against Redbridge.

The second team meanwhile were locked in to some tight encounters with their opponents from Throw in the Tal. On board 1, Dave Shapland had played his Classical System (3…Bc5) against the Spanish. This gave him a solid base to work from but there weren’t going to be any trademark complication in his game against Ben Graff. David Wedge was struggling a little in his game against Ed Goodwin and John Allan also appeared to be under pressure with the Black pieces against Gareth Griffiths. Only Josh Blinkhorn on board 4 seemed to hold a definite advantage playing the White side of a Sicilian Richter Rauser variation and with a strong initiative against Steven Woolgar.

For the first team, the remaining two games looked tight as well. Phil Cook had to weather an aggressive middle game assault from Mark Murrell while Pete Leonard had suffered an opening malfunction and was two pawns down with the White pieces in an endgame against Michael Wilson.

As the night draw towards it’s end, Josh converted his advantage to put the second team 1-0 up. Shortly afterwards, John also turned the tables on his opponent to make it 2-0. David lost his game on board 2 and that left Dave Shapland to steer the shop safely home on board 1. He’d won a pawn in the transition from middle game to end game and seemed to be in no danger of losing as long as he didn’t over press for the win. He played patiently – missing a few opportunities along the way but finally converting successfully to make the final score 3-1 to Hebden 2.

In the first team match, Phil, having resisted his opponents attack was able to gain a material advantage in an unbalanced ending. He still had work to do but converted comfortably enough to put Hebden 1 over the top. The cherry on the cake was Pete’s incredible turn around in his game which seemed totally forlorn but he successfully invaded his opponent’s position and ended up snatching a win meaning the first team won by 3.5-0.5.

With both teams firmly back on track, Hebden 2 lie in fifth position in the table on 9 points behind Bearsden Grizzlies (who have 10) and King’s Head and Newport A (who both have 11). There are three other teams on 9 and so the second team seem to be guaranteed a very stiff encounter on the final round. Meanwhile, Hebden 1 are on 8 points along with 10 other teams although they lie in ninth thanks to their excellent game points score of 18/24. A win in the final round should see them enter the top eight positions which would get them promoted.

The game viewer below has all 16 games from rounds 5 and 6 of the competition. Round 6 games first.

For the benefit of those who are uninitiated, the game viewer above contains all eight games played last night and from the previous round. It will automatically scroll through all of them one after the other unless you tell it to stop by clicking on the ‘=’ button below the board. To select the game you wish to view click on the ‘…’ symbol in the white box above the board. This will reveal a drop down menu for you to choose from and when you select your game will appear. You can navigate forwards and backwards using the arrow buttons beneath the board or click on the moves in the text box on the right. Most of the annotations in these games have been generated by Lichess’ in house engine which creates auto-analysis for every game played (one of the tools they use to track down and punish cheats!) and are therefore part of the download when you export games from Lichess to your own chess engine or database.

One Response to “The fall and rise of Hebden Bridge”