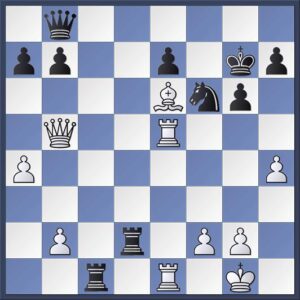 Toczek vs. Pantazopoulos. Black to play after White has just played 25.Qb5. How did Stavros continue to secure a winning advantage with a beautiful tactic? the answer can be found in the game viewer below.

Round 4 of the 4NCL Online Season 3 was played on Tuesday night this week and saw the championship move past the half way stage. Hebden Bridge 1 came into the round with a perfect record of three match wins and 12 game points from those matches. This put them joint top of Division 7 alongside the top seeds King’s Head. A little further down the rankings, but still very much in contention, Hebden Bridge 2 had won their first two matches before being defeated in round three by second seeds, Newport ‘A’.

With two further teams on three match wins (but behind the top two on board scores) it was clear that Hebden 1 were going to draw very challenging opposition in round 4 and indeed, when the draw came out on Friday evening they found themselves pitted against Hebden 2’s nemesis – Newport A. Both teams fielded exactly the same line up that they had in the previous round but this time, the ratings margin between all four pairings was much closer than they’d experienced in round 3.

Board 1 had a real international feel to it with Newport’s Polish-born FIDE Master Grzegorz Toczek facing Hebden’s Greek import Stavros Pantazopoulos in what the main stream media might have dubbed the ‘Battle of the Unpronouncables’! This game was a tense struggle originating from the 2.c3 variation of the Sicilian Defence which the players reached by transposition. Playing White, Toczek seemed to have succeeded in achieving a nice advantage from the opening as he had the bishop pair, more space and had created a structural weakness in Stavros’ camp in the form of doubled, isolated e-pawns. however, Stavros hung on and was able to generate strong counter play when his opponent grabbed the loose pawn on e6. Then followed a stunning tactical sequence which culminated (from the diagram) with 25…Rdd1 26.Rxd1 Rxd1+ 27.Kh2 Rd5!! 28.Bxd5 Qxe5+ and saw Stavros winning a piece. by this point he was very low on time and, with the queens still on the board, there was still much to be done. However, Stavros calmly steered the game home to make it 2-2 for Hebden Bridge players against the Newport’s FIDE master!

Sadly for Hebden 1, that early highlight was as good as it got for them. The remaining 3 boards were all ferociously competative, but Newport some how managed to bag wins on all of them. Board 3 was the next game to finish. There, Greg Eagleton had essayed the King’s Indian Defence which generally tends to lead to fireworks and his opponent, Gareth Yeo, did not shy away from the fight as he played one of White’s most aggressive responses with 5.Nge2 intending a king’s side pawn advance and queen’s side castling. It looks as if Greg’s 16…b6? a decisive mistake (16…f5 was needed to prevent White’s 17.g4) and after this, although the game was so complicated that inaccuracies were guaranteed, White always seemed to have the initiative. In the end Greg lost on time, but his position at the board was hopeless by that stage.

On board 4, Andrew Clarkson was locked in a mortal struggle with Barbara Graczyk-Gibiec. Unlike the wildness that occurred on the board above them, this game was a drawn out and tense affair with neither side allowing their opponent much by the way of opportunities. The engine points out that White might have secured some sort of advantage after 17.Bg3 instead of 17.Bxe7 but the game bowled on and eventually the players emerged in a same coloured bishop and knight endgame with six pawns each. We’re used to seeing Andrew grind out wins with great endgame technique but this time he was on the receiving end as his opponent capitalised on a mistake to grab a pawn. Then, with Andrew still hanging on grimly he blundered to walk into a knight fork that lost him his bishop and it was game over. That made it 2-1 to Newport.

The last game to finish was the board 2 match up between Phil Cook and Adam Rakos. This one was delayed in starting when Phil couldn’t see his opponent online and his opponent couldn’t see Phil’s challenge. Eventually, the problem was resolved and the game got underway nearly half an hour late. When it did it saw another pretty heavy-weight positional encounter that was tense and tight from start to finish. Phil navigated the opening successfully and generated a weak backward pawn on d6 that looked like it might give him decent chances when he eventually won it on move 19. However, it was clear that, whilst Phil had been winning the pawn, Adam had been busy generating some activity of his own. Some arch manoeuvring followed in which Black managed to regain his pawn deficit as Phil sought to reactivate his own pieces. Then, just as the game appeared to be reaching it’s climax, Phil resigned when it looked like Black would be breaking through his king via f2. The engine assessment was that Phil still had an advantage but by this point he was running short of time and Black’s initiative did look scary.

So, Hebden 1 went down to their first defeat. However, they are still very much in touch with the top of the table as there are just five teams above them. King’s Head and Newport are the only two teams to have won all their games so far and will face off in what promises to be an epic clash in round 5, while there are three more teams on seven match points out of a possible eight. Hebden 1 are the first of the teams on six match points.

While all of this drama was going on, Hebden Bridge 2 were making an attempt to bounce back from their defeat at the hands of Newport A last time out as they took on Streatham B. This match was also closely contested with all four games going on well into the evening. In the end however, Hebden came out on top thanks to fine wins for John Kerrane, Josh Blinkhorn and Rob Catlow on board two, three and four respectively. Dave Shapland lost on board 1 against Michael Chung who defended against Dave’s attack very well and then drove home his counter attack with great precision.

All eight games from this week’s matches can be found in the game viewer below. The annotations are created by Lichess’s in house engine and some of the ‘exclams’ are therefore rather arbitrary.

For the benefit of those who are uninitiated, he game viewer above contains all eight games played on Tuesday night. It will automatically scroll through all of them one after the other unless you tell it to stop by clicking on the ‘=’ button below the board. To select the game you wish to view click on the ‘…’ symbol in the white box above the board. This will reveal a drop down menu for you to choose from and when you select your game will appear. You can navigate forwards and backwards using the arrow buttons beneath the board or click on the moves in the text box on the right. Most of the annotations in these games have been generated by Lichess’ in house engine which creates auto-analysis for every game played (one of the tools they use to track down and punish cheats!) and are therefore part of the download when you export games from Lichess to your own chess engine or database.