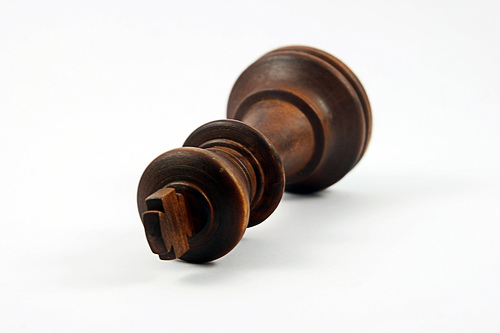 Last year’s champions fell at the first hurdle this year. This image is used under Creative Commons license and sourced from Leo Reynolds Flickr photostream

In recent seasons something of a tradition has developed in the Calderdale Evening Chess League’s first division. The reigning champions always give their title rivals a sporting chance at the beginning of the new season by losing their first match. Last season Huddersfield took this tradition to new extremes by losing their first two matches. They still battled back into contention but were a point behind Hebden Bridge ‘A’ and Todmorden ‘A’ when the dust had settled.

Despite dearly yearning to break this quaint custom, this year’s reigning title holders, Hebden Bridge ‘A’, ended up following the same path. Ironically against Huddersfield. To make the result even more painful, Hebden were at home, fielded a team that was strong enough to beat their nemesis and managed to lose on two boards where they probably had the upper hand. The result could easily have been turned on its head.

The night began badly for Hebden Bridge when Huddersfield’s Captain and Board 1 player, Mitchell Burke, despatched Matthew Webb summarily after an uncharacteristic blunder by Matty left him a piece down for nothing whatsoever. The other four games continued later into the evening. Hebden stabilised the match situation when Nick Sykes pressed Robert Sutcliffe for the whole game without really looking like he could find a big enough advantage to win and peace was agreed.

At this stage the situation still seemed retrievable for Hebden. Their Captain, Dave Shapland managed to exploit a small inaccuracy by Antonio Aguirre to give himself a passed d-pawn on board 4 and Pete Leonard on board 3 had the better of a complicated queen and pawn ending against the adamantine Richard Boylan. Wins on these two boards would probably have seen Hebden to victory but it was not to be.

Dave Shapland doesn’t generally get into time trouble but on this occasion he did and as he scrambled to make the control at move 36 his tiny advantage evaporated and then became a significant deficit as he decided to hunker down for a passive defence instead of looking for active options. On move 35 he blundered his queen, resigned and lost on time simultaneously!

Still the match could have been saved. Matthew Parsons, in contrast to his Captain, had gained exactly nothing from his opening against David Firth but he resolutely ground out a victory from a virtually equal position in a double rook and pawn ending to show that he is up for another big season this year.

And so, yet again, the last board would decide the result of a Hebden Bridge ‘A’ match. Last season they made a habit of saving draws or snatching wins. This season they failed at the first attempt. Pete Leonard was the man undr the gun this time and he had 10mins to his opponents 5 but it was he that had to try and find the best course of action to secure victory and his time advantage soon evaporated. In the end Richard proved to be more equal to the psychological challenge of handling the switch from slow, deliberate and caeful play to the mania of a sudden death time crisis. Pete failed to find a winning plan and seemed unable to speed up his play sufficiently to put Richard under pressure. In the end it was Pete’s flag that dropped.

A frustrating night for Hebden ‘A’ then but congratulations must go to Huddersfield who, as they always do, put in a tough and resolute performance to snatch the points. The final match scorecard looked like this:

Elsewhere in League 1, Todmorden ‘A’ crushed their colleagues, the newly promoted Todmorden ‘B’ (for whom the “retired” Alastair Wright made a surprise appearance on board 2!) by a score of 3 — 1 (both sides defaulted the bottom board). Courier ‘A’ overcame the default of their top board to defeat Belgrave at home 3 — 2. Finally, the other promoted team from last season, Halifax ‘A’ trounced Brighouse 4½ — ½ to go straight to the top of the table.

League 2 also got underway on Monday night and Hebden Bridge now has three teams battling it out in this division. John Kerrane picks up the story of their progress.

The ‘B’ team started life in the second division as they mean to go on with an emphatic 4 — 1 victory over their own ‘C’ team players. Despite serious resistance by the ‘C’ team, the superior strength of the senior team carried the day, especially on the lower boards. The individual results were:

Before we go on to the ‘D’ team report let us just give an honourable mention to Mr Kerrane himself who modestly omitted his own tremendous results against former pupil Matthew Wedge-Roberts. This result saved a white wash and was hard earned.

The ‘D’ team chalked up an encouraging 4 — 1 win away against Courier ‘B’. Although they were helped by defaults by the home side, Hebden Bridge ‘D’ won the majority of the games played, and promise to be a tougher proposition this season. The individual results were:

Indeed, Danny Crampton’s ‘D’ team will trouble many more teams in the division than they did last season. With our excellent junior prospect, Kyle Sharpe, his father Craig, new club member Daniel Rich as well as Robert Murray who is still to be added to the side on board 1, I think they could be the surprise package of this season. Watch this space…

In the game viewer below you’ll find nine games from Monday night including annotated contributions from Matthew Parsons and Pete Leonard. It’s always good to see some annotated games from some of the best players in the league so thanks to them for taking the time and effort.