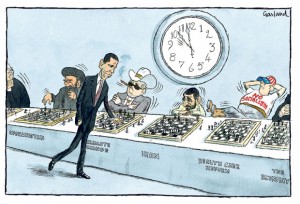 Obama vs. Romney; Djokevic vs. Murray; Barcelona vs. Celtic – now all these classic encounters can be mentioned in the same breath as Todmorden vs. Hebden Bridge! Obama is supposed to be a bit of a chess player as this cartoon from Poitics Plus in the U.S. aludes to.

There have been some notable one-on-one rivalries played out during the course of this week. In America the Obama versus Romney election race went to the tape and was vicsiously contested as the incumbent hung on to his office for four more years. Meanwhile in London, Novak Djokavic and Andy Murray met on the tennis court for the seventh time this year in what has become an enthralling and thrilling rivalry. Djokevic won this round but the two may meet again in the ATP World Tour Finals on Monday in what would certainly be another amazing and tenaciously fought encounter. Much more surprisingly, in Glasgow on Wednesday night, Celtic beat Barcelona in the Champions League after coming so close to getting a result in the Camp Nou last week.

All of the above were exciting contests to get the blood pumping. However, for Hebden Bridge ‘A’ there was only one contest in their diaries this week that they cared about as they travelled to Todmorden for a League 1 encounter they could not afford to lose and really needed to win if they were to keep alive any hopes of retaining their title.

Todmorden ‘A’ and Hebden Bridge ‘A’ have scrapped out some extraordinary matches over the last two seasons. A draw at Todmorden in the league last season, an excellent 4 — 1 home win for Hebden in the return match and then two more drawn matches in the team knockout competition (the replay last week was only decided in Hebden’s favour on tie-break) suggested that this would be another hard fought affair.

However, there was a problem. Hebden Bridge were missing their regular board 1 player, Matthew Webb. This was not necessarily a problem on the top board as Matthew Parsons was a more than capable deputy. The impact would be felt further down the order because the rest of the team had to move up a board each. Andy Leatherbarrow was drafted into board 5. He’s been on excellent form for the ‘B’ team and was more than capable of giving his opposite number a run for his money. In fact, board 5 was the only board where Hebden had a grade advantage and so they would by relying heavily on Andy to get a result there. The key battle ground would be on boards 2, 3 and 4 were Pete Leonard, Dave Shapland and Nick Sykes would all have to step up to play opponents graded above them.

The night started uneventfully as Matthew Parsons and Martin Hamer agreed to a very early draw after playing only 14 moves. At first it appeared that this would only serve Todmorden’s agenda but as the night wore on it transpired that Hebden Bridge were much better suited by the outcome.

The rest of the games went all the way to the end of the night and the match hung in the balance as each one offered plenty of twists and turns. On board 2 Pete Mulleady ventured 1.c4 thus side-stepping ing the 1.f4 line he had played against Pete Leonard in the first of the team KO matches. The opening seemed to go well for Leonard as the queens came off early and he gained a decent space advantage to compensate him for the bishop pair his adversary had acquired.

On board 3 Clarkson and Shapland met for the second time in a week and were playing the same colours to boot. The big opening question was, would Dave go for the Sicilian Dragon again or vary and play 1…e5? Having gained a decent position (indeed some winning chances) against Andrew’s Levenfish variation last week Dave decided to take it on again. Andrew varied his play from the previous week by opting for 11.Qd2 instead of 11.Qf3 although the game developed along similar lines with both players attacking their opponent’s kings on opposite sides of the board.

On board 4 Rob Tokeley and Nick Sykes were also playing again after having met last week. In their case however the colours were reversed with Nick playing Black instead of Rob. Interestingly they also played a similar opening with colours reversed, last week it was a Queens Gambit Declined and this week a Semi-Slav. Rob carefully avoided the most complicated lines in order to steer proceedings down slightly quieter routes but then advanced his f-pawn boldly in order to keep Nick on the back foot.

Chris Edwards and Andy Leatherbarrow on board 5 were also engaged in a tight struggle originating from a Sicilian Defence. Both these two players have, in the past, had a propensity to get in to difficulties on the clock and indeed in this occasion they had barely made 20 moves when they were down to their last 15 minutes each to reach time control.

In fact all four remaining boards in the match featured a degree of zeitnot with the results still very much capable of going in either direction. What ended up deciding the encounter was one team’s ability to handle the pressure and manage their clocks more effectively than the other.

Todmorden’s Captain was the first to crack on board 5. With several moves to go before time control he simply ran out of time in a position that still had plenty of play and in which the outcome was certainly unclear. Hebden had the lead.

Not long after they had secured at least a draw in the match as Rob Tokeley also ran out of time before reaching move 36. Objectively Nick had quite sufficient play to secure at least a draw but had felt himself under pressure for most of the game so the outcome was certainly a relief for him. Rob meanwhile has played four and lost four against Hebden Bridge and will wonder what he has to do to get a result against them. Maybe next time.

Andrew and Pete now both had to win their games to save the tie for Todmorden. It was a tall order but they both had slightly better games and had managed to make the first time control successfully. Andrew had succeeded in gaining a knight and bishop for a rook after a complicated queen-less middle game. However, the end game remained complicated and the limited time available demanded swift play before accurate play. Dave managed to keep his pair of rooks and was able to win a pawn. With few pawns left on the board but still five pieces the kings became exposed and calculation remained a critical factor. With Andrew’s clock once more hanging he was forced to give perpetual check rather than risk losing on time. This results decided the match in Hebden’s favour.

The two Pete’s were the last to finish and in this game Pete Mulleady finally managed to score Todmorden’s only win of the night to reduce the deficit to 2 — 3.

This was a famous win for the out-gunned Hebden ‘A’ team who all “turned up” to a match for the first time this season and got the result their sensible and solid play deserved. They’ll have to do this a few more times this season if they are indeed to mount a defence for their title. The final match score card was:

Elsewhere in the league the runaway leaders Huddersfield maintained their 100% start to the season by destroying Brighouse away 0 — 5! They would have been delighted to hear of Todmorden’s demise because this enabled them to stretch their lead at the top to 3 points over Hebden Bridge who now lie in second place.

Halifax ‘A’ also recorded a resounding (though less predictable) victory over Courier ‘A’ by a comfortable score of 4 — 1. Although Courier defaulted on board 5 Halifax scored creditable draws on boards 3 and 4 where they were out graded and then their big guns on 1 and 2 (Bill Somerset and Darwin Ursal) finished the tie with wins against John Morgan and Dave Patrick. Halifax join Todmorden in third place, one point behind Hebden and four behind Huddersfield.

The last match of a busy bonfire night was also played in Todmorden where their ‘B’ team took on Belgrave. The visitors edged it in a close fought affair by the odd point. This result saw Belgrave move clear of the two clear relegation candidates, Brighouse and Todmorden ‘B’, who have only a point between them (it’s Brighouse’s). Belgrave join Courier ‘A’ on five points and now have a superior board count to their venue-sharing partners.

The game viewer below features four of Monday night’s games. My thanks to Pete Leonard, Nick Sykes and Todmorden’s Andrew Clarkson for sending annotated versions for publication.