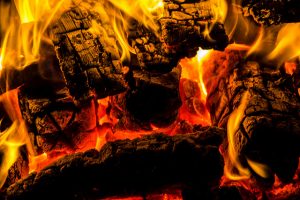 Facing up to closest rivals Belgrave ‘A’ was something of an ordeal for Hebden Bridge ‘B’ on Monday night. Image: Kevin Jarrett’s Flickr photo stream

It was a night of high tension at the Trades Club on Monday as Hebden Bridge Chess Club’s ‘B’ and ‘C’ teams took part in round 4 of the Calderdale Evening Chess League 1. Both sides were well matched by Belgrave ‘A’ and Huddersfield ‘B’ respectively and both matches were decided by fine margins even if the score lines didn’t necessarily reflect that.

Hebden Bridge ‘B’ were at the top of the table as the only side with a 100% record after three rounds when the evening began. Having already managed to beat strong sides in the form of Huddersfield ‘A’ and Hebden Bridge ‘A’ they now faced their closest rivals, second placed Belgrave ‘A’.

Half term week meant changes for both sides as some regular players were away. For Hebden Bridge their star performers on boards 4 and 5, Sam Swain and Neil Suttie, were absent. In their place came Richard Bedford on board 5 and Chris Bak who played on board 2. On the Belgrave side they were also missing a star performer on the lower boards, Steve Harrington. In his place came Ian Hunter who was inserted on board 1, allowing the rest of the team to move down a board. Both sides then were in fact marginally stronger than they had been for previous rounds.

The players had barely made their opening moves when Ian Hunter and Matthew Parsons agreed a draw on board 1. Ian boldly essayed Matthew’s trade mark opening system with White himself – the ‘Accelerated London’ with 1.d4 and 2.Bf4. Matthew quickly deployed a solid response, equalized and offered a draw on move 12 which Ian accepted. The match would be decided on the bottom four boards where there was a good deal more belligerence.

On board 2, Chris Bak took advantage of a dubious move order employed by John Morgan and was able to pick up an exchange early on in the game with some accurate play. Unfortunately, his precision did not continue as he overlooked a tactical feature a little later on and was compelled to give the exchange back. A relieved John offered a draw at this point and Chris saw no reason to decline.

Now the match would be decided on the bottom three boards and Hebden had cause for concern on all of them. On board 3 there was a ‘Battle of the Daves’ and Dave Patrick and Dave Shapland had a Classical Variation of the Ruy Lopez on the board. Dave Patrick seemed to have the better of the opening and took control of the open e-file. Shapland countered by offering a pawn up in order to activate his pieces. He succeeded in doing this and managed to win back the material at which point Dave Patrick offered him a draw.

The fact that Dave Shapland declined the draw offer had nothing to do with the position on the board. If anything he was still worse and could have accepted gladly. However, by this stage of proceedings it was clear that Hebden were right up against it. Pete Leonard was a pawn down against Malcolm Corbett who had essayed the super-aggressive Four Pawns Attack Variation against Pete’s Alekhine’s Defence. Pete appeared to be in a good deal of trouble. Meanwhile on board 5 Karim Kahn versus Richard ‘Beaky’ Bedford was anything but straight forward and both players seemed to be burning their clock time liberally. 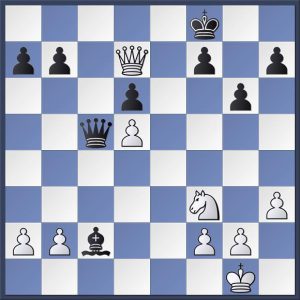 Patrick vs. Shapland. It’s white to make his 23rd move. He has the advantage but there is only one way to proceed to preserve it. Can you find it? Answer in the game viewer at the end of this post.

So, with the prognosis apparently poor on boards 4 and 5, Dave decided he had to play on and try to win his game against Dave Patrick. Of course matter then immediately got worse for him as he tried to play actively but in doing so opening himself him to a direct attack on his king. Fortunately, Patrick missed his best chance to win the game but instead followed a line that also looked very promising indeed. However, it turned out to be one of those lines that, whilst optically appearing overwhelming, in reality required precise play to capitalize on. Now with just a queen and a minor piece left each (plus six pawns each) Patrick grabbed a Black pawn on b7 and lost all of his advantage. The key position is in the diagram on the right. See if you can find the only move to keep White his advantage. After the pawn grab Shapland was able to equalise the position again and Patrick decided to offer a queen exchange when it became apparent that his opponent was going to win back his pawn. At this point Patrick offered a draw again.

The situation had not improved in any way on the lower boards. In fact, by this point Pete was two pawns down and still under massive pressure and Beaky was getting into hot water on the clock. On this occasion though Dave Shapland had more reasons than just the match situation to help him decide not to accept the draw offer. He’d seen that, after the queen exchange he’d have a bishop to Dave’s knight and could play on and try to win with little risk of losing. So, this is what he did.

With time control looming and all six players running short of time, the ’10.15 crisis’ was the most nerve shredding point of the night. Karim and Beaky were both in desperate trouble with their clocks and were banging out moves in a highly complicated and tense position knowing that one slip could prove fatal. Meanwhile Pete and Malcolm were also short of time and were trying to navigate a head-spinning position. Pete seemed to be fighting back however.

On board 3 Dave Shapland had a critical decision to make on his 36th move. He’d seen a pawn break which looked like his only chance to win but meant temporarily sacrificing a pawn. However, if it all went wrong he’d probably lose. Once more he decided to gamble and put his opponent under pressure. Once more he got lucky as Dave Patrick didn’t play the most resilient defence and slipped into a losing endgame position. Now there was hope for Hebden to at least hold the match.

Incredibly, they did a lot better than draw the match as, during the final phase of the match they somehow managed to win all three remaining games! First of all, Pete swindled Malcolm with a mating attack when Malcolm thought his own attack would connect first. It didn’t, and Pete put Hebden ahead. Then Beaky and Karim got into their second time crisis of the night but by this stage Karim’s attack had completely petered out. He’d had a piece for three pawns but then lost a second piece and then a rook as it all went wrong for him. Hebden had snatched the match from the fire.

The last game to finish was Patrick versus Shapland on board 3 where ultimately Shapland’s bravery was rewarded as he finished off his opponent to seal the deal. It had been an ordeal indeed but Hebden had held out. All five games from this match can be found in the game viewer at the end of this post.

Meanwhile, across the room, Hebden Bridge ‘C’ and Huddersfield ‘B’ were engaged in a similarly tough battle although in this case the games ended earlier in the evening. Half-term week hit Hebden ‘C’ hard and they were missing a player. This meant that Huddersfield’s Captain, Alec Ward, got a night off and still collected a point for his team.

This proved to be decisive as across the remaining four boards the honours were evenly shared. Hebden’s Captain, Martin Syrett, lost out to Granville boot on board 2 but Paul Gledhill equalised the score with a win on board 3. Board 4 was drawn and this left Andy Leatherbarrow in the envious position of having to win on board 1 against David Gray to level the match. Hard as he tried this never appeared to be likely and indeed Gray held firm and a draw was brokered giving Huddersfield a 2 – 3 win.

Here are the individual results from that match:

Elsewhere in the League, Hebden Bridge ‘A’s match against Huddersfield ‘A’ at the Golden Lion was postponed at the visiting team’s request and will be rearranged for either the 12th or the 26th of November and at the Lee Mount Club, Halifax ‘A’ smashed Belgrave ‘B’ 5 – 0.

After 4 rounds of play (for everyone except the two sides mentioned above) Hebden ‘B’ remain top of the league with 8 points. They’ve increased their lead over Belgrave ‘A’ who, despite their loss to the leaders stay in second place with 5 points. After that there is something of a bottle neck with Halifax ‘A’, Huddersfield ‘B’ and Belgrave ‘B’ all on 4 points. Hebden Bridge ‘C’ and Huddersfield ‘A’ have 2 points and Hebden Bridge ‘A’ languish at the foot of the table with 1 point but with that match against Huddersfield ‘A’ in hand.

We’ve been neglecting League 2 on this website. They have now played three rounds of fixtures, the most recent being on the 22nd of October. In this round Brighouse continued their perfect start to the season with a narrow 3 – 2 over Huddersfield ‘C’. Steve Westmoreland scored an excellent win against Robert Broadbent on board 1 for the visitors and another Robert, Sutcliffe, also won on board 3. However, wins for Paul Whitehouse, Adrian Dawson and Tim Pryke meant that Brighouse took the match.

Hebden Bridge ‘D’ were missing two players for their match with Halifax ‘C’ (who only brought four players themselves) but they still managed to get their first game point on the board as Zora Sandhu defeated Barry Wadsworth on board 1. Congratulations to Zora for this excellent win. Let’s hope many more are to follow. Below is the match scorecard:

Finally, Belgrave ‘C’ lost to Halifax ‘B’ 2 – 3 despite Halifax only having four players. Carlos Velosa, Pete Moss and Daniel Rowley all won their games with (that man again!) Steve Harrington scoring the only point aside from the default for the home team against Howard Wood.

Brighouse stay top with 6 points having taken sole lead by beating Huddersfield ‘C’. They and Halifax ‘B’ are on 4 points. Belgrave ‘C’ and Halifax ‘C’ have 2 points and Hebden Bridge ‘D’ have yet to score a match point but have at least now scored a board win.

Next week, on Bonfire night, the first round of the Calderdale Individual Championship will take place at the Trades Club. All Calderdale players are welcome, indeed encouraged, to enter. If you have not yet entered and wish to do so please contact John Kerrane either by email at kerranerie@btinternet.com or telephone on 01422 842 426. Entries close on Sunday evening so get moving if you’ve not signed up yet!

One Response to “Trial by fire”