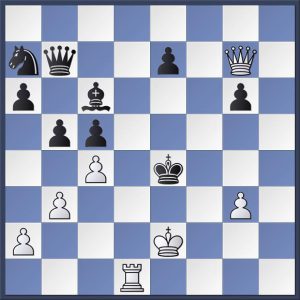 Swales vs. Bedford. With the Black king ambling about in the centre of the board it is little wonder that White can win the game. The solution is not straightforward though. Can you find the winning idea for White? Answer in the game viewer at the end of the post.

The third round of Calderdale League 1 fixtures took place on the 15th of October and, with all three Hebden Bridge teams in action at the Trades Club there was plenty of action to kibitz! Let’s dive straight in and report on these matches.

Hebden Bridge ‘A’ have had a very tough start to the season. They still have at their core the three players who have done the most to secure them the last four league titles: Andrew Clarkson, Martyn Hamer and Phil Cook. However, their lower boards are weaker this season than they have been in recent years and this is causing them some difficulties for the moment. In both their first two matches they lost on boards four and five. Combined with one other board loss in each match they have been condemned to back to back defeats for the first time in very long time – albeit to two strong sides in the form of Hebden Bridge ‘B’ and Halifax ‘A’.

Hebden Bridge ‘C’ probably expected to be somewhere near the foot of the table this season, and indeed, they have managed just a drawn match against Belgrave ‘B’ from their first two rounds. However, this return still saw them sitting above their ‘A’ team before they faced them at the Trades Club last week.

On the night Hebden ‘A’ had to contend without Phil Cook amongst their number. This meant that whilst they had Andrew Clarkson and Martin Hamer on boards 1 and 2, Andy Swales was promoted to board 3, Pete Dickinson to board 4 and Terry Sullivan was drafted in to play on board 5 for the evening. Would this be enough to gain a result from their ‘C’ team?

Hebden ‘C’ welcomed their captain Martin Syrett into their line up for the first time this season. He played below Andy Leatherbarrow on board 2. Richard Bedford also made his first appearance of the season on board 3 while Paul Gledhill played board 4 and Neil Bamford board 5. All of this meant that, while Hebden ‘A’ looked favorites on the top 2 boards, the other three appeared to be very evenly matched.

As it turned out the form books didn’t lie on this occasion. The first game to finish was the board 2 ‘Battle of the Martins’. This was over in relatively short order as Martyn Hamer met Martin Syrett’s King’s Indian Defence with a contemporary treatment which saw him expand aggressively with White on the king’s side. Martin Syrett never really managed to get any counterplay on the queen’s side, or even to get his queen’s bishop and queen’s rook into the game and he made a tactical blunder on move 24 which would see him lose a piece. He resigned without going any further.

The other four games were played out over a greater part of the evening and were closely contested. On board 5 Neil Bamford and Terry Sullivan played out an endgame where Neil always seemed to have a slight edge. He managed to convert this into a full point and equalise the match score.

Not long after that however, Andrew Clarkson was victorious in the board 1 ‘Battle of the Andrews’ to put the ‘A’ team back in front. This game saw an old and complicated variation of the Scotch Game appear on the board. As Andrew Clarkson mentions in his notes to the game (published in the game viewer at the end of this article) the moves followed the original stem game of the so-called Blumenfeld Attack (characterised by 6.Nb5!?) which was first played by Benjamin Blumenfeld in 1903!

For the first ten moves or so Andy Leatherbarrow seemed to be navigating the complexities well but it seems that Black has the tougher practical challenge in this line and, slowly but surely, his position began to deteriorate. However, Andrew Clarkson then played a few inaccurate moves himself and allowed his opponent to coordinate somewhat before a couple of dodgy moves in succession cost Andy the game.

Hebden ‘C’ drew level once again when Richard Bedford saw off the spirited challenge of Andy Swales on board 3. In some sort of Pseudo Catalan position, Andy was the first to go astray when he appears to have miscalculated a tactical sequence which saw Richard grab a pawn. In exchange for that pawn however Andy got a half open h-file to work with and he quickly went about trying to exploit this by rearranging his fianchettoed bishop to f3 and put his king on g2 in its place. Then, another confusing tactical sequence caused a further material imbalance as Richard gave back his extra pawn but won a knight and bishop for one of Andy’s rooks. 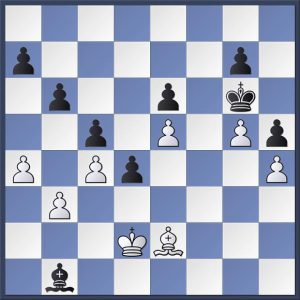 Dickinson vs Gledhill. Black to move. Can you find the correct winning method? Answer in the game viewer at the end of this post.

Further excitement was to follow as Andy managed to drive Richard’s king into the open board on e4! The situation seemed most perilous, but this point of the game was reached with both players in time trouble and Andy missed a couple of winning continuations just before and then again just after the time control. (Take a look at the game position top right and see if you can find the most clinical finish for White. The solution is in the game viewer at the end of this post.) Finally, the game simplified and Beaky was able to convert the ending. It was tough luck on Andy who has played some interesting and decent chess for his new team so far this season but has yet to show any results for it.

Finally, the board 4 match-up between Pete Dickinson and Paul Gledhill was the point on which the match would pivot. By the time the other games had finished these two had reached a same coloured bishops and pawns ending in which Paul had an extra pawn. It looked for all the world like Paul would win the match for Hebden Bridge ‘C’ and heap more misery on their ‘A’ team, but as the evening draw to a close, Paul was unable to find the winning method (can you do better in the second diagram on the right?) and agreed to a draw which left honours even between the two sides.

Meanwhile, on the next row of tables, Hebden Bridge ‘B’ were taking on Huddersfield ‘A’. Most unusually for the Calderdale League, Hebden ‘B’ were the only team with a 100% record after two rounds. Huddersfield meanwhile had suffered a disaster at the hands of their ‘B’ team before pretty much getting a walk over against Halifax ‘A’ at home. The visitors brought a strong side with them though as Messrs Eagleton, Keddie, Westmoreland, Sykes and Tooley looked like they would give the home side a stern test.

The first game to finish was the board 1 clash between Greg Eagleton and Matthew Parsons. These are two of the strongest players in the league and, as you might expect, a fair degree psychology came into play from the very beginning of the game. For a start, Greg played 1.e4 which is certainly not his regular habit and this suggested to Matthew that his opponent must have prepared something to play against his Caro-Kann Defence. Indeed, Greg had prepared something, but Matthew dodged this prep by opting to take a road less travelled in the form of 4…Nf6 (instead of 4…Bf5 or 4…Nd7 which are more frequently seen and must have been what Greg had prepared for.) With the psychology now over, the two played in a very respectful fashion and agreed to peace terms as early as move 19 with the position level.

The other four games in the match went on deep into the evening and were closely contested although play was remarkably ponderous. No better indication of this was that the longest game of the match was concluded on move 37, yet all four of them finished after 10pm.  This also meant that they finished in a relatively short time frame in the run up to the time control at 10.15.

First to finish was the game between Nick Sykes and Sam Swain on board 4. The queens came off the board as early as move 7 but that in no way led to an arid and featureless position. Sam found himself saddled with an isolated e-pawn and this was the basis for Nick’s play. It looked like was making in-roads to the Black position but Sam defended resourcefully until, somewhere around move 20, Nick misjudged a complicated tactical melee, lost a piece and resigned without continuing any further.

On board 3, Pete Leonard and Steve Westmoreland also contested an English Opening which then transposed into a sort of Neo-Grunfeld where White plays g3 and fianchettos his king’s bishop. This was a tense game with both players using plenty of time to reach move 20. With both sets of knights off the board, Pete seemed to manage to get his bishops and rooks coordinated more swiftly and managed to grab a pawn before pushing his now passed d-pawn up the board.

Both players made some inaccurate moves in the time scramble but it was Steve who made the last mistake as he grabbed an exchange that enabled Pete’s d and e-pawns to swap files and gallop towards the back rank. Once the players had agreed that time control had been reached Steve saw that his position was lost and resigned. Hebden Now had the match hand with 2½ points.

Neil Suttie pushed them over the line shortly afterwards when he agreed to a draw with Dave Tooley in what was another tense and complicated struggle. Both players were down to almost no time on their clocks with moves still to make to get to the haven of time control when they decided to agree to a draw.

Finally, Dave Shapland sealed the home side’s victory when he beat Dave Keddie on board 2. This one was another queenless middle game from a 2.c3 variation of the Sicilian Defence. The Hebden player managed to equalise early in the game, created a weakness in the White camp in the form of doubled, isolated f-pawns and then with the tension building up in the centre of the board, found a way to win a pawn. The game simplified down to a rook and bishop (for white) against Black’s rook and knight plus an extra pawn. Objectively it might have been possible for Dave Keddie to hold it but it was very tricky as Shapland’s knight had several wonderful outposts available to it from which it could not be opposed.

Finally, Keddie decided to try and defend through active counter play. It was worth a try but Shapland manage to calculate through the variations, ran his king up the board and finally forced the win with his opponent’s monarch penned in on a1.

This concluded a fine win for Hebden. Here is the final match scorecard:

You can find nine of the games from these two matches in the game viewer at the end of this post.

Last night League 1 teams play their fourth round and so we’ll report on those matches, plus the intervening round of League 2 fixtures later this week.