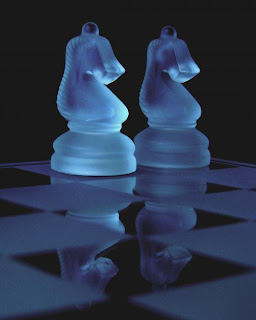 It was just over 15 years ago now. May 1996. I entered the Morecambe Chess Congress Minor section over Spring Bank Holiday weekend. I won with a score of 5½/6. I think the prize was about £200, pretty good money for a Minor.

That was the last occasion on which I won an individual competition. A pretty abysmal record I’m sure you’ll agree. Of course I haven’t played very many congresses in the intervening years and I have played my part in some team victories during that time but even still, one congress in 15 years. Not good.

But then last month I entered the Victoria Gardens Blitz tournament in Leeds. It’s just a bit of fun. Leeds Chess Club are the hosts and the Victoria Gardens Hotel is the excellent venue. The format is fairly informal but never-the-less enticing. Participants pay a £5 entry fee and play a 7 rounded Swiss tournament with 10 minutes each on the clock. It’s a winner-takes-all type of affair (well actually the winner takes 45% of the entry fee and the runner up 20%) but you get the idea!

As it happens this edition (they try to organise one every month) was the best attended yet with 17 players involved. As one of the highest rated entrants I was expected to do well. Of course it’s never as straightforward as the ratings suggest it will be and although I did manage to win with a score of 6/7 there were certainly some hiccups and lucky breaks along the way. You have to have a bit of good fortune in blitz chess.

I got off to my customary slow start. In the first round I managed to obtain a dreadful position from the opening and compounded my troubles by getting into terrible time trouble. Late in the middle game I managed to conjure up some desperate tricks and was most relieved when my opponent missed a mating combination. In round four, sharing the lead with one other player, I was felled by this rival who played excellently in a complicated game and fully deserved to take the sole lead. Sadly for him he then fell to pieces completely and lost his next couple of games to disappear from the top of the leader board.

In rounds 5 and 6 I was fortunate enough to be able to enter into a pair of Two Knight’s variations against two of the stronger players in the competition. This pet opening enabled me to pick up two wins out of the opening when normally I’d have expected long and difficult scraps. I’ve given these two miniatures below. Both were won on the 20th move and gave me some pleasure. The Two Knights has a habit of doing that in my experience!

My final dose of good fortune came in the final round when I played a colleague from Leeds Chess Club. He played Larsen’s Opening (1.b3) which he knows inside out and I inadvertently followed a mainline for about 15 moves! The outcome was that he obtained a favourable double rook and pawn ending and as I desperately tried to hold the position he made excellent inroads. Eventually I decided to abandon passive defence and doubled my rooks on the e-file. At that point one of his rooks was on f2, his king was on g1 and he had pawns on g2 and h2. The game ended when he played …Kf1??

5 Responses to “Two Knights the night”