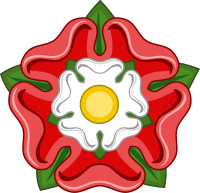 The last time peace was concluded between the Yorkists and the Lancastrians Henry VII made a new emblem to signify the occasion. This image was sourced from Wikipedia

This week it seems that the British summer has arrived. It’s time to light the barbeque, prepare the Pimms and rub in the sun-tan lotion all set to the soothing sound of leather on willow. That’s right. The test match season has begun!

Whilst England were polishing off their 1st test of the summer against the West Indies, Hebden Bridge Chess Club were also getting into the spirit of summer sport as they played a test match of their own against East Lancashire League winners Burnley. Now, they say there is no such thing as a friendly game of chess and I quite agree, especially when there is the age-old Yorkshire vs. Lancashire rivalry on the line. However, although this match was a close as it comes to a friendly between the old enemies, both sides took the challenge seriously and brought something close to their full strength to bare for the clash.

Andrew Clarkson (Burnley and Todmorden stalwart) was the brainchild for this excellent notion. Hebden Bridge had won the Calderdale League and Burnley had won the East Lancs league. He quite rightly emailed me to ask: ‘why not find out which of the two league winners are the best?’ I agreed with him and the match was arranged. In the end we decided on 6 players per team (one more than in our usual Calderdale line-up) and standard Calderdale League time limits with a coin toss to decide how colours would be distributed on the boards. The visitors won the toss and took White on the odd boards. So, at 7.45pm, after a brief exchange of pleasantries, we all sat down to begin the hostilities.

The first game to finish was on board 2 where Burnley Captain, Andrew, managed to neutralise Matthew Parsons favourite London System. He had obviously learned from a painful experience that he had suffered at Matthew’s hands earlier in the season when he lost to the same opening system in the League match between Hebden Bridge ‘A’ and Todmorden ‘A’. Matthew has provided some commentary on the game in the viewer at the end of this post but his gist was that he may have missed an opportunity to capitalise on Black’s move order when he played the position as he would have done if both sides had castled when they hadn’t. Later it seems Andrew overlooked a decent chance to secure an advantage and after that the position soon equalised and became lifeless. Matthew offered a draw and Andrew accepted. 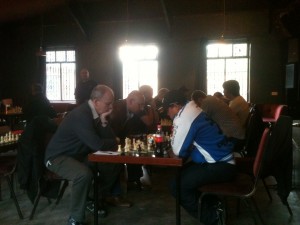 On board 1 Howard Hughes (left) locks horn with Darwin Ursal

It was a while before any of the other games finished and at this stage the two sides certainly seemed very well balanced. Then, suddenly, the balance swung in Lancashire’s favour. On the top board, Hebden’s star performer of 2011-12, Darwin Ursal, was facing his toughest test yet in the form of Burnley’s 200+ rated Howard Hughes. Howard had cunningly side-stepped Darwin’s favourite Sicilian Dragon variation by deploying the double-edged Smith-Morra Gambit. In return, Darwin then deployed an unusual method of avoiding the mainlines in order to get the game into situation where both players were forced onto their own resources rather than their memorisation of opening lines.

At first Darwin’s active play seemed to give him some initiative but then it became clear that Howard had an edge. He converted this into a material advantage when he used a pretty combination to win a pawn. Darwin missed a brief window of opportunity to really test Howard’s strategy and once that chance had passed he was in trouble and dropped more material as he lost his first game ever for Hebden Bridge. It had to happen eventually.

Things got worse for Hebden before they got better. On board 3 Alastair Wright had tried to maintain a solid position against Steve Appleby. He seemed to have succeeded in keeping his opponent out until they transposed into an endgame and somehow, in the process, Alastair overlooked a tactic and lost a piece. With no chance of recovering the material and no tangible compensation he resigned leaving Hebden perilously adrift by ½ – 2½.

It looked like curtains but then, Hebden did what they have done so many times this season. They came back from the dead. Boards 4 and 5 finished within a few minutes of one another and when the dust had settled Hebden had levelled the match score with one board to play. 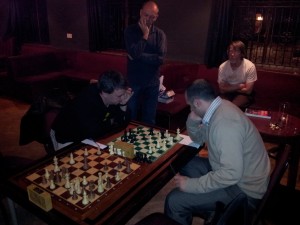 Last to finish... again! Nick Sykes (right) keeps team mates and the opposition alike from their beds as he and Colin Edwards battled on in a complex and interesting struggle before ultimately concluding the peace treaty.

First Pete Leonard secured a nice positional win against Steve Whitehead to break his run of 4 games without a win. Then, moments later, Captain Dave Shapland scored the only win of the night with the Black pieces (and ended his own miserable run of form) as he overcame Rob Tokeley. In the middlegame Rob focused on a plan to trap Dave’s queen but he’d overlooked a bold forward manoeuvre by her majesty and suddenly Dave had a strong attack. At the end Rob was also in desperate time trouble but resigned before the time control in a hopeless position.

Inevitably this left Hebden Bridge’s Nick Sykes (always the last to finish!) to complete his game against Colin Edwards. The game was a complicated mainline Schevenigan with play for both sides. Eventually, Colin decided to sacrifice the exchange but he didn’t quite get enough counter play for it and Nick was able to trade into an endgame where he was the exchange up. It looked like a long drawn out affair that would linger into the night as Nick looked for a way to convert his advantage. But then, after a brief discussion with his Captain, Nick offered Colin a draw and they shook hands, both player happy not to have cost their team the victory.

The final score a creditable but peaceable 3 — 3. The match card looked like this:

Thanks to the gentlemen of Burnley chess club for making the trip across the boarder to give Hebden Bridge such a searching test. A good time was had by all and some good chess was played. Many of the games in the viewer below come with annotations.

Next Monday, the 28th, has been reserved for the playing of the first round of the Summer Individual Knockout Handicap Tournament. Anyone taking part in this competition should check the draw on the “Summer Events 2012” page to find out if they are playing and who against. All games will take place at The Trades Club.

2 Responses to “War of the Roses: Peace Breaks Out”